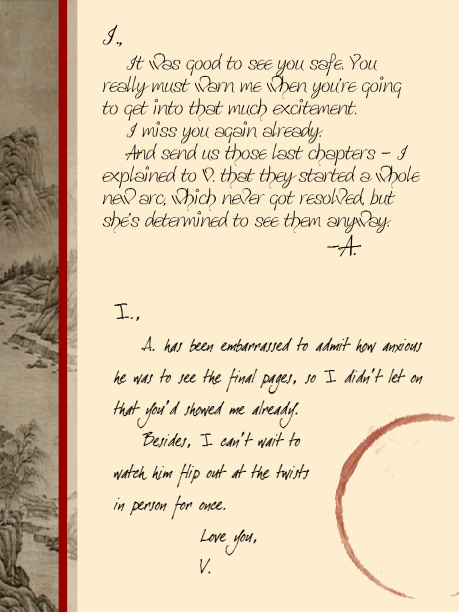 It was good to see you safe. You really must warn me when you’re going to get into that much excitement.

I miss you again already.

And send us those last chapters – I explained to V. that they started a whole new arc, which never got resolved, but she’s determined to see them anyway.
-A.

A. has been embarrassed to admit how anxious he was to see the final pages, so I didn’t let on that you’d showed me already.

Besides, I can’t wait to watch him flip out at the twists in person for once.
Love you,
V.

it must be booooring

So, ah, now that you’ve all seen it, some things that this means:

1) You’re welcome to ask anything you want about the rest of the plot, characters, story, ideas. No more holding back due to spoilers. All questions will be answered.

2) That said, there are plenty of times when the answer will be “I haven’t figured it out yet.” In that case, feel free to speculate. Come up with something interesting, and I’ll probably say Sure Why Not and go do a sketch of it.

3) Speaking of sketches . . . I’m also open to art prompts. Anything you particularly want to see – either from the finished arc, or from an undrawn one – say the word.

Did someone say art prompts?

1. Starlights, Starlights, and more Starlights. Girlycard is an obvious Seiya. Timothy as Taiki. Yaten has to be antagonistic to Venus (Seras), so a (sometimes) male Pip who’s clad more in the original’s outfit (including eye patch). People get him and Sailor Human mixed up a lot…

2. Heinkel as Uranus and Yumiko as Neptune. Haruka gets to be a (partial) male in this one. XD

3. Millennium as various foes: Doc as Prof. Tomoe, Rippy as Hotaru/Mistress 9/Sailor Saturn (you already did a drawing of this – it’s an awesome idea), Major as Galaxia commanding his army of 1000 artificial vampire senshi, and Zorin as Nehelennia. Schroedinger should be the Wiseman for humor, with Dandy as his Rubeus.

4. I wonder if a female copy of Young Walter could be revealed to be Pluto.

The dynamics don’t map one-to-one with this, but the visuals are fun. Just imagine Wiseman Schroedinger with a ball of yarn instead of one of crystal.