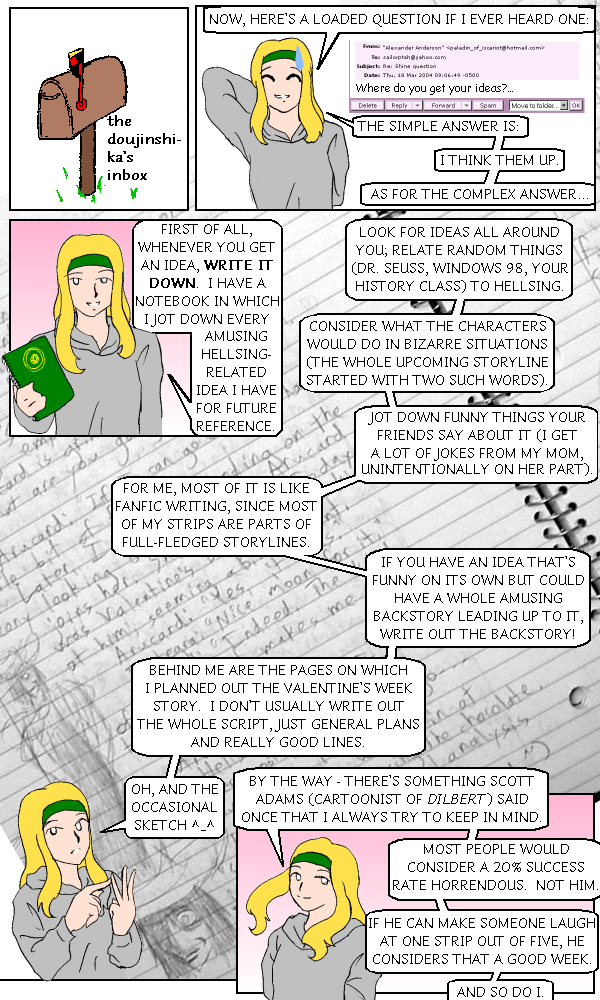 In the sense of “go easy on yourself,” not “be a slacker who doesn’t try.”

Erin: Now, here’s a loaded question if I ever heard one.

Email: Where do you get your ideas?

Erin: The simple answer is: I think them up. As for the complex answer…

First of all, whenever you get an idea, write it down. I have a notebook in which I jot down every amusing Hellsing-related idea I have for future reference.

Look for ideas all around you; relate random things (Dr. Seuss, Windows 98, your history class) to Hellsing.

Consider what the characters would do in bizarre situations (the whole upcoming storyline started with two such words). Jot down funny things your friends say about it (I get a lot of jokes from my mom, unintentionally on her part).

For me, most of it is like fanfic writing, since most of my strips are parts of full-fledged storylines. If you have an idea that’s funny on its own, but could have a whole amusing backstory leading up to it, write out the backstory!

Behind me are the pages on which I planned out the Valentine’s Week story. I don’t usually write out the whole script, just general plans and really good lines. Oh, and the occasional sketch ^_^

By the way — there’s something Scott Adams (cartoonist of Dilbert) said once that I always try to keep in mind. Most people would consider a 20% success rate horrendous. Not him. If he can make someone laugh at one strip out of five, he considers that a good week. And so do I.