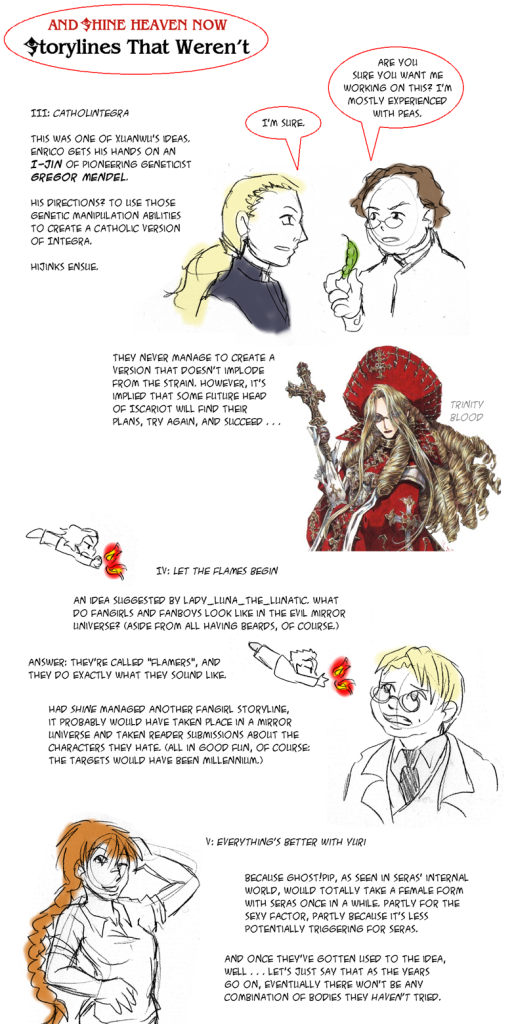 This was one of Xuanwu’s ideas. Enrico gets his hands on an I-jin of pioneering geneticist Gregor Mendel. His directions? To use those genetic manipulation abilities to create a Catholic version of Integra. Hijinks ensue.

Mendel: Are you sure you want me working on this? I’m mostly experienced with peas.

They never manage to create a version that doesn’t implode from the strain. However, it’s implied that some future head of Iscariot will find their plans, try again, and succeed….

An idea suggested by Lady_Luna_The_Lunatic. What do fangirls and fanboys look like in the evil mirror universe? (Aside from all having beards, of course.)

Answer: they’re called “flamers”, and they do exactly what they sound like.

Had Shine managed another fangirl storyline, it probably would have taken place in a mirror universe, and taken reader submissions about the characters they hate. (All in good fun, of course: the targets would have been Millennium.)

Because ghost!Pip, as seen in Seras’ internal world, would totally take a female form with Seras once in a while. Partly for the sexy factor, partly because it’s less potentially triggering for Seras.

And once they’ve gotten used to the idea, well…let’s just say that as the years go on, eventually there won’t be any combination of bodies they haven’t tried.