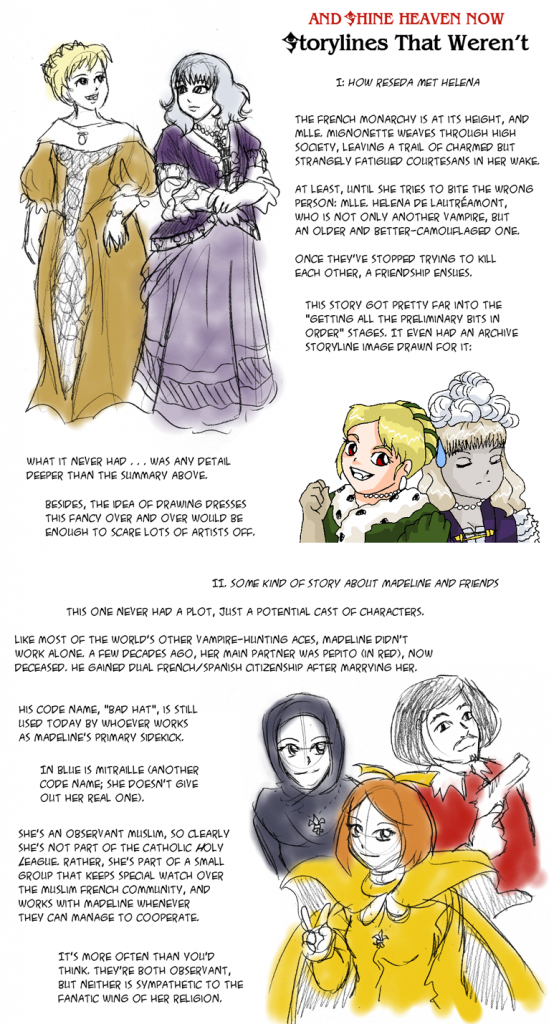 I: How Reseda Met Helena

The French monarchy is at its height, and Mlle. Mignonette weaves through high society, leaving a trail of charmed but strangely fatigued courtesans in her wake.

At least, until she tries to bite the wrong person: Mlle. Helena de Lautréamont, who is not only another vampire, but an older and better-camouflaged one.

Once they’ve stopped trying to kill each other, a friendship ensues.

This story got pretty far into the “getting all the preliminary bits in order” stages. It even had an archive storyline image drawn for it:

What it never had…was any detail deeper than the summary above. Besides, the idea of drawing dresses this fancy over and over would be enough to scare lots of artists off.

II. Some Kind Of Story About Madeline And Friends

This one never had a plot, just a potential cast of characters.

Like most of the world’s other vampire-hunting aces, Madeline didn’t work alone. A few decades ago, her main partner was Pepito (in red), now deceased. He gained dual French/Spanish citizenship after marrying her.

His code name, “Bad Hat”, is still used today by whoever works as Madeline’s primary sidekick.

In blue is Mitraille (another code name; she doesn’t give her real one).

She’s an observant Muslim, so clearly she’s not part of the Catholic Holy League. Rather, she’s part of a small group that keeps special watch over the Muslim French community, and works with Madeline whenever they can manage to cooperate.

It’s more often than you’d think. They’re both observant, but neither is sympathetic to the fanatic wing of her religion.