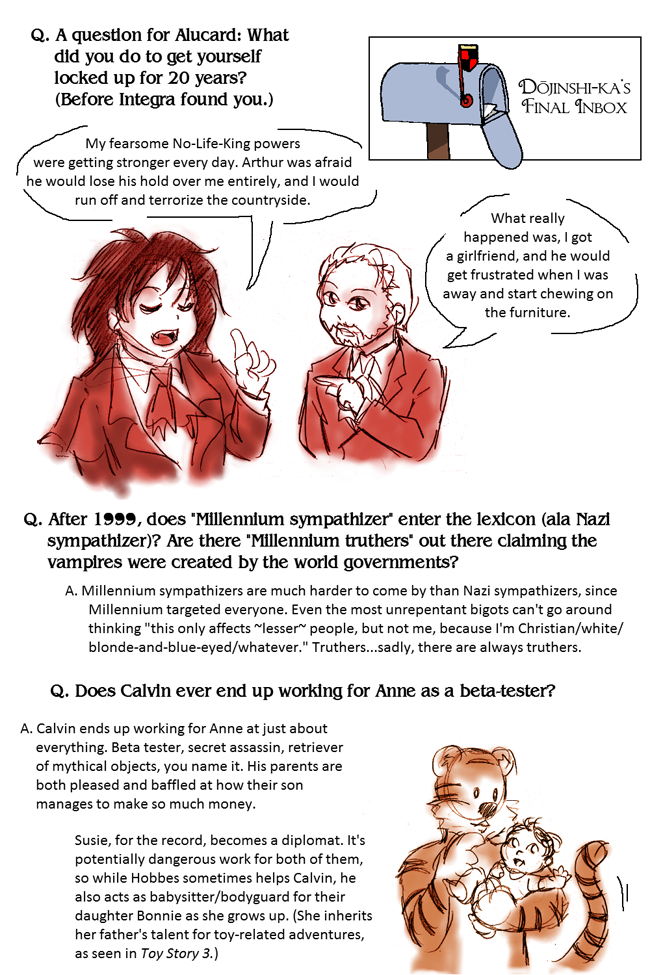 Q. A question for Alucard: What did you do to get yourself locked up for 20 years? (Before Integra found you.)

Alucard: My fearsome No-Life-King powers were getting stronger every day. Arthur was afraid he would lose his hold over me entirely, and I would run off and terrorize the countryside.

Arthur: What really happened was, I got a girlfriend, and he would get frustrated when I was away and start chewing on the furniture.

Q. After 1999, does “Millennium sympathizer” enter the lexicon (a la Nazi sympathizer)? Are there “Millennium truthers” out there claiming the vampires were created by the world governments?

A. Millennium sympathizers are much harder to come by than Nazi sympathizers, since Millennium targeted everyone. Even the most unrepentant bigots can’t go around thinking “this only affects ~lesser~ people, but not me, because I’m Christian/white/blonde-and-blue-eyed/whatever.” Truthers…sadly, there are always truthers.

Q. Does Calvin ever end up working for Anne as a beta tester?

A. Calvin ends up working for Anne at just about everything. Beta tester, secret assassin, retriever of mythical objects, you name it. His parents are both pleased and baffled at how their son manages to make so much money.

Susie, for the record, becomes a diplomat. It’s potentially dangerous work for both of them, so while Hobbes sometimes helps Calvin, he also acts as babysitter/bodyguard for their daughter Bonnie as she grows up. (She inherits her father’s talent for toy-related adventures, as seen in Toy Story 3.)