Some of you might find that scooter awfully familiar-looking. (If the fire powers didn’t already tip you off…)

Rome. The vampires sent here were easily dispatched. Not enough undead, too many holy relics. Only one remains…

Robin (thinking): That child is in trouble!

Robin (thinking): I’m supposed to be in hiding. I can’t compromise my cover for some girl on the street…

Okay, make that “none remain.” 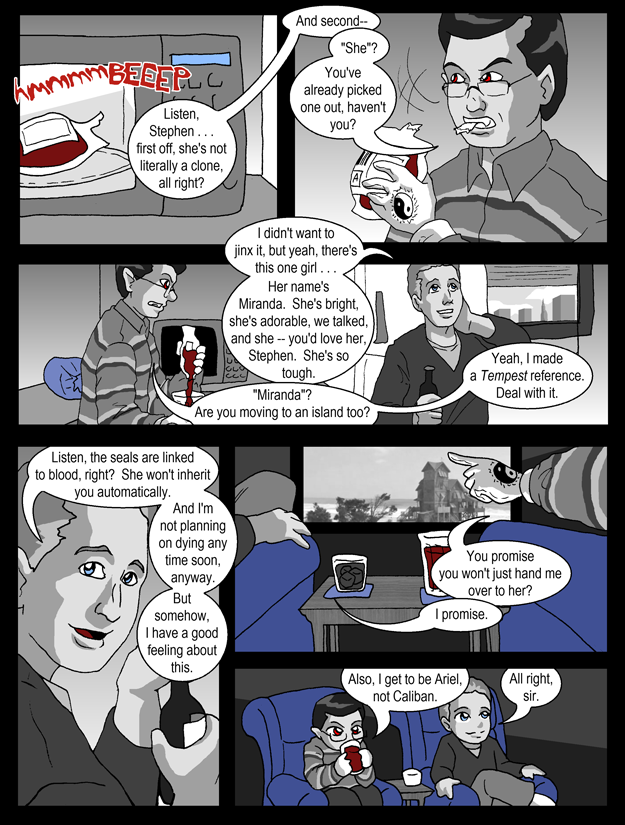 The movie they’re watching is Nights in Rodanthe, of which Stephen is a fan.

Jon: Listen, Stephen…first off, she’s not literally a clone, all right? And second–

Stephen: “She”? You’ve already picked one out, haven’t you?

Jon: I didn’t want to jinx it, but yeah, there’s this one girl…Her name’s Miranda. She’s bright, she’s adorable, we talked, and she — you’d love her, Stephen. She’s so tough.

Stephen: “Miranda”? Are you moving to an island too? Yeah, I made a Tempest reference. Deal with it.

Jon: Listen, the seals are linked to blood, right? She won’t inherit you automatically. And I’m not planning on dying any time soon, anyway. But somehow, I have a good feeling about this.

Stephen: You promise you won’t just hand me over to her?

Stephen: Also, I get to be Ariel, not Caliban.