Heinkel’s dialogue: “Integra…you upgraded your vampire…and changed your coat…” (Please note: tomorrow’s comic is going to be a bit gory.)

Enrico: This — this is your army?

And they’ll be on you again if you try anything. 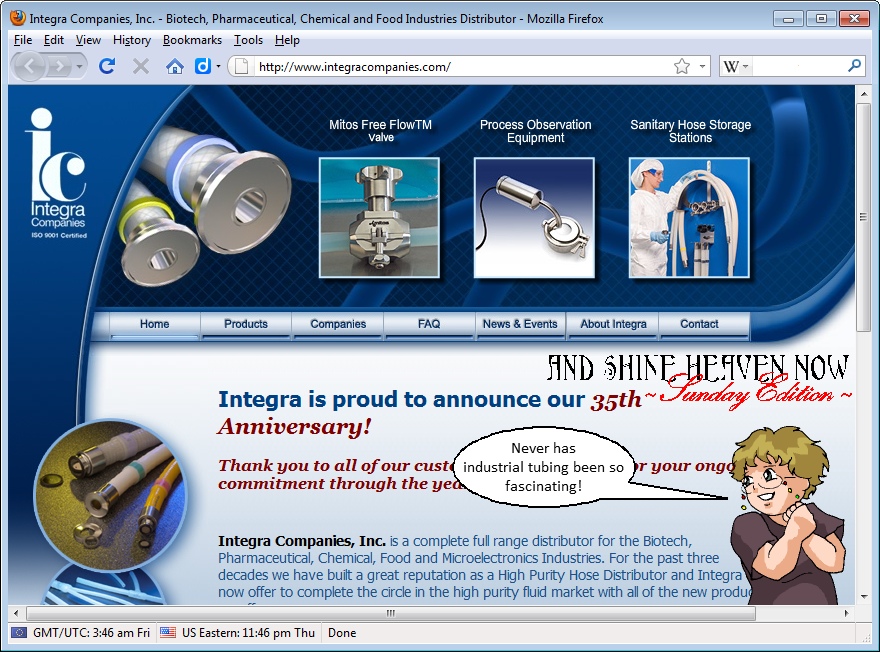 Erin: Never has industrial tubing been so fascinating!

Integra: You heard me! Abandon this target! Your master Hellsing commands it.

Integra: Okay, all of you, back off! Go find some Nazis to eat instead.

I’m protecting you because — somewhere in there — there’s a guy who used to be one of my best friends.

And right now, that’s the closest thing I have to something worth dying for!

Heinkel: Anderson ran off. The rest of our people are no match for these things. Timothy went down before they even appeared.

If I hadn’t sent Yumiko and Yumie away…?

Enrico: You did what? You can’t disobey me like that — I’m an archbishop —

Heinkel: Guess what, Enrico? Right now, I wouldn’t care if you were the bleeping Pope.

Enrico: Heinkel! You lost your coat!

Heinkel: Yeah. And my companions. And, by now, most of my bullets.

These new undead came out of nowhere. And they just keep coming.

Enrico: …You chest is showing.

Heinkel: Enrico? My boobs are the least of your worries.

Credit to Matthew Henry for suggesting parts of this strip, particularly that last cameo.

On the head zeppelin…

Major: My beautiful war! Too bad there’s nobody left around here to gloat over it with.

Schrödinger: Hey, Major? It’s okay if we’re losing in the rest of the world, right?

Major: It doesn’t matter who wins! All that matters is that we have a glorious war!

Schrödinger: Good, because Zorin got crushed (literally!) by Seras…

Major: Marvelous! The Draculina will finally be a worthy opponent.

Schrödinger: …the demons Doc set loose are being outclassed…how did the Holy Grail end up in Japan, anyway?

Major: Who knows? It sounds like a marvelous fight!

Schrödinger: …and one of the airships we sent to North America is apparently being outmaneuvered by a flying doghouse.

The Baron’s old rival has shown himself at last! This is the best war ever!

Schrödinger: Wasn’t the Baron from World War I?

Enrico: Y-you can’t get in

God will protect me

Enrico: That…is not my army.