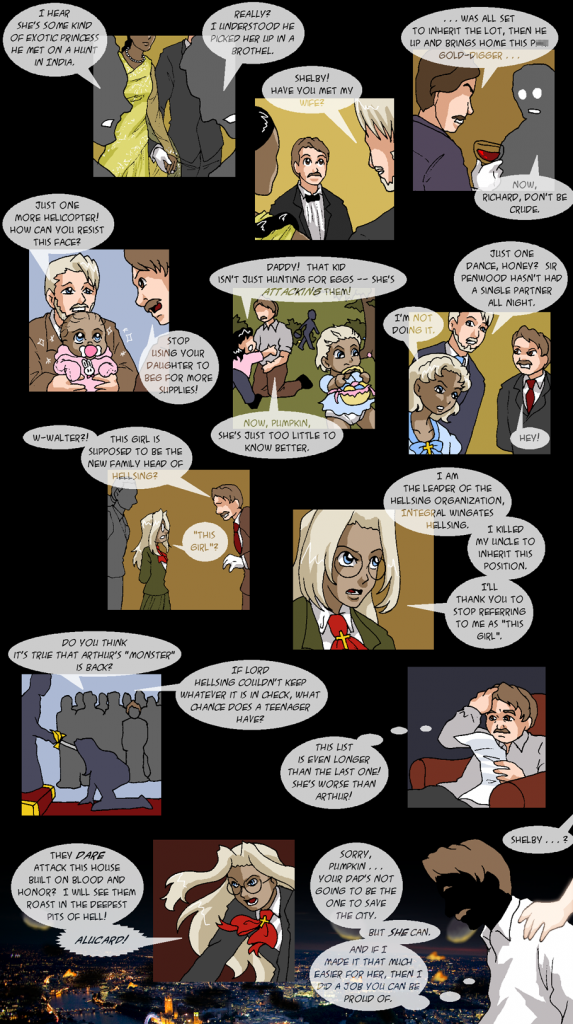 Gossips: I hear she’s some kind of exotic princess he met on a hunt in India. / Really? I understood he picked her up in a brothel.

Arthur: Shelby! Have you met my wife?

Richard: …was all set to inherit the lot, then he up and brings home this [bleep] gold-digger…

Arthur: Just one more helicopter! How can you resist this face?

Penwood: Stop using your daughter to beg for more supplies!

Integra: I’m not doing it.

Penwood: W-Walter?! This girl is supposed to be the new family head of Hellsing?

I am the leader of the Hellsing Organization, Integral Wingates Hellsing. I killed my uncle to inherit this position. I’ll thank you to stop referring to me as “this girl.”

Knights: Do you think it’s true that Arthur’s “monster” is back? / If Lord Hellsing couldn’t keep whatever it is in check, what chance does a teenager have?

Penwood (thinking): This list is even longer than the last one! She’s worse than Arthur!

Integra: They dare attack this house built on blood and honor? I will see them roast in the deepest pits of hell! Alucard!

Penwood (thinking): Sorry, pumpkin…your dad’s not going to be the one to save the city. But she can. And if I made it that much easier for her, then I did a job you can be proud of.