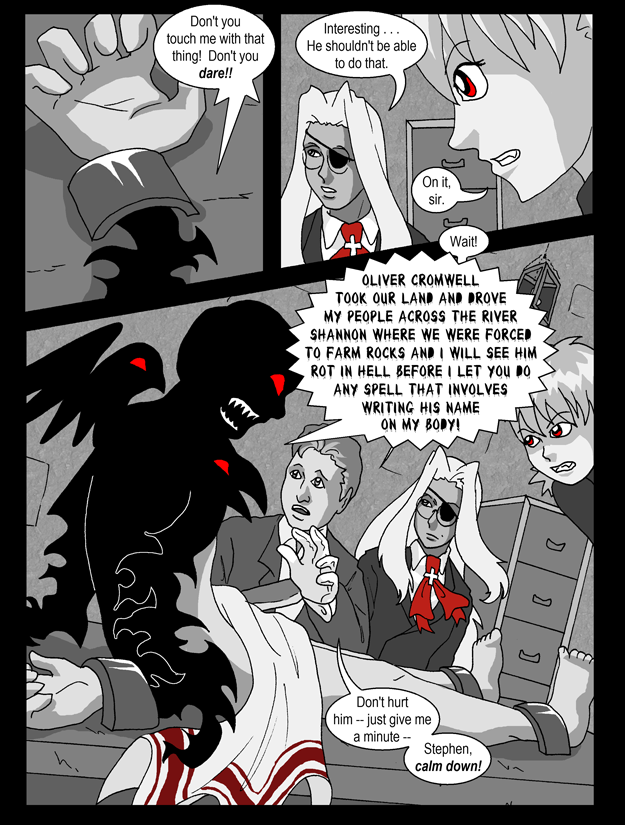 To get the full effect of Stephen’s rant, fast-foward the 3/17/2010 TCR interview with Nell Irvin Painter to about 2:30, then crank your volume.

Stephen: Don’t you touch me with that thing! Don’t you dare!!

Integra: Interesting…He shouldn’t be able to do that.

Stephen: Oliver Cromwell took our land and drove my people across the river Shannon where we were forced to farm rocks and I will see him rot in hell before I let you do any spell that involves writing his name on my body!

Jon: Don’t hurt him — just give me a minute — Stephen, calm down!

Penwood: If any monsters come around here, I bet some fire would scare them right off.

I think I just taught a little girl how to kill ghouls.

Bertie: Spiffing! Little girls are the most terrifying creatures on the planet.

Bertie: Then you know exactly what I mean! 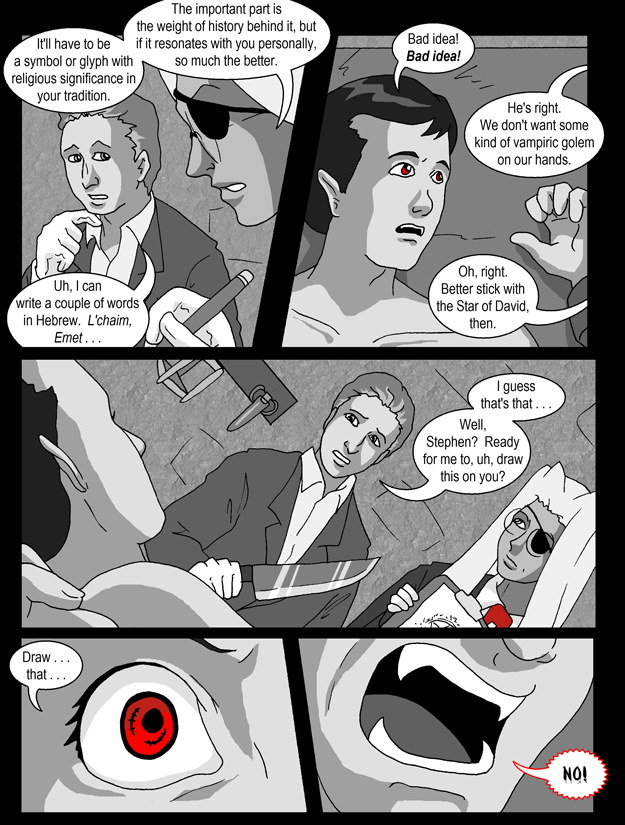 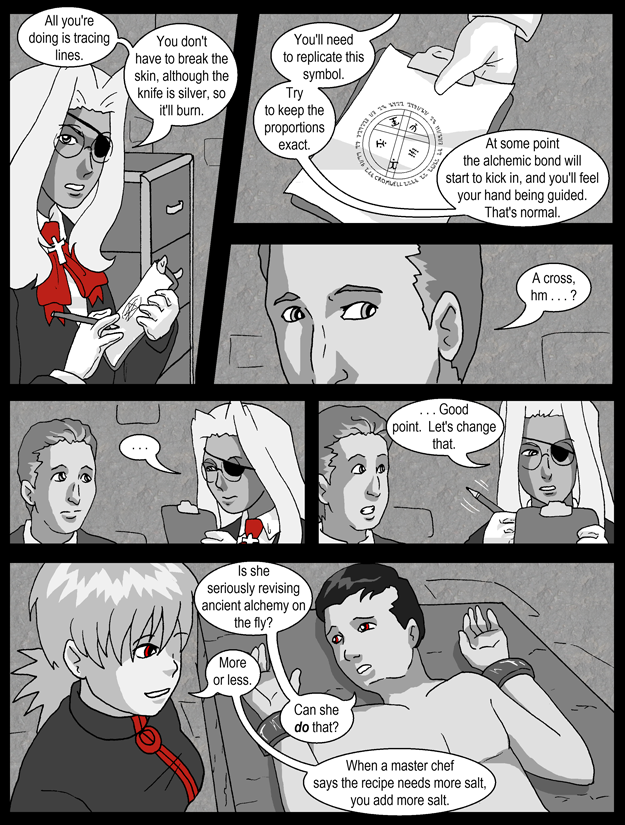 Integra: All you’re doing is tracing lines. You don’t have to break the skin, although the knife is silver, so it’ll burn.

You’ll need to replicate this symbol. Try to keep the proportions exact. At some point the alchemic bond will start to kick in, and you’ll feel your hand being guided. That’s normal.

Stephen: Is she seriously revising ancient alchemy on the fly?

Stephen: Can she do that?

Jackie: Rose, sweet’eart, come away from that window!

Rose: But, Mum, the other building’s on fire!

Bertie: You can’t touch anything directly. All you can do is inspire living people’s hearts.

I’ll guide people to the safest paths out of the fire. You stop by the next building over and help the folks remember where they left their first aid kits. 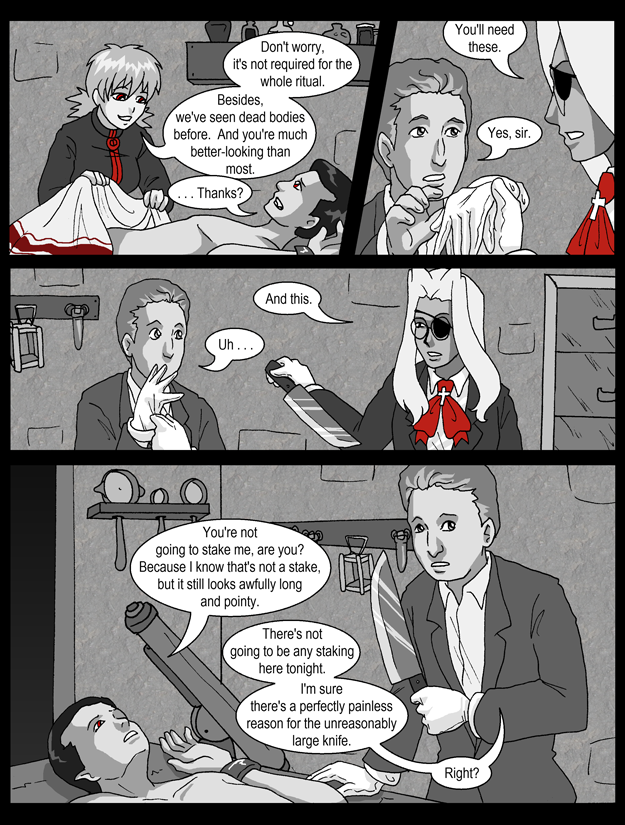 Seras: Don’t worry, it’s not required for the whole ritual. Besides, we’ve seen dead bodies before. And you’re much better-looking than most.

Stephen: You’re not going to stake me, are you? Because I know that’s not a stake, but it still looks awfully long and pointy.

Jon: There’s not going to be any staking here tonight. I’m sure there’s a perfectly painless reason for the unreasonably large knife. Right?

Bertie: Bertie Wooster! Jolly good to meet you! Didn’t know you when I was alive, but we came awfully close.

You were one of Arthur Hellsing’s posse, right? He was a good egg, that fellow. Any other questions, before we dive into the field?

Why are you wearing a fez?

Bertie: Fezzes are cool! Reggie hates it, of course, but sometimes a man has to put his foot down. 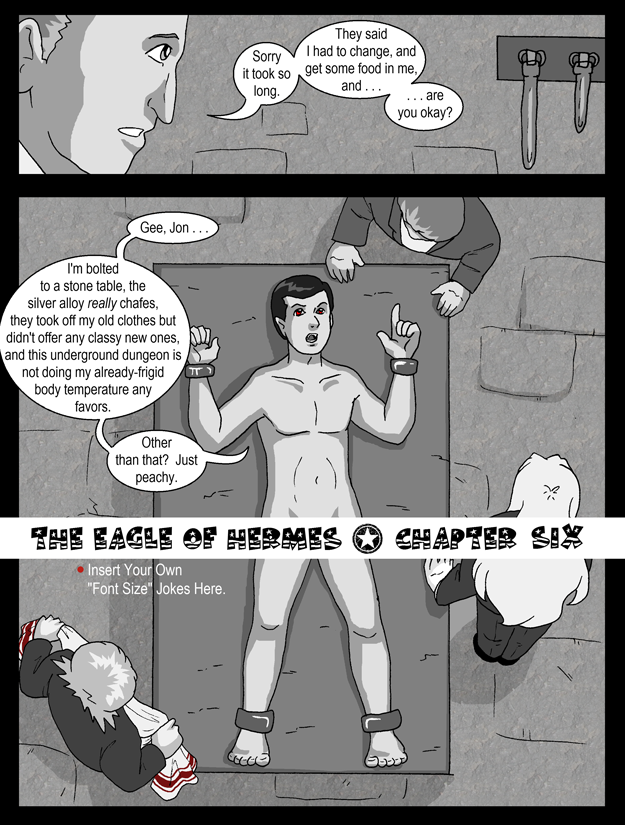 Chapter subtitle stolen from the works of Dave Barry.

Jon: Sorry it took so long. They said I had to change, and get some food in me, and…are you okay?

Stephen: Gee, Jon…I’m bolted to a stone table, the silver alloy really chafes, they took off my old clothes and didn’t offer any classy new ones, and this underground dungeon is not doing my already-frigid body temperature any favors.

Other than that? Just peachy. 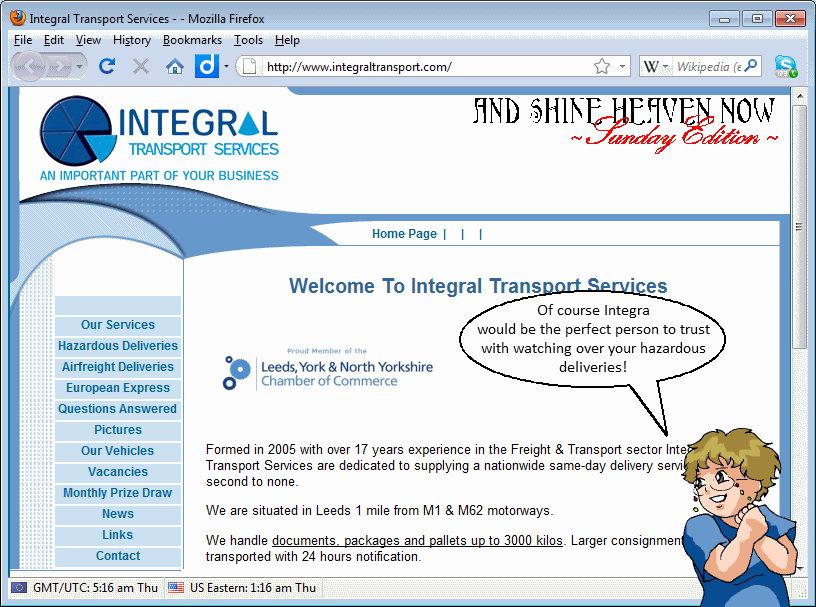 Erin: Of course Integra would be the perfect person to trust with watching over your hazardous deliveries!