Fangirl daughterofmarius had a hard time choosing between Alucard, Walter, Arthur, Sir Penwood, and the coffin. Thus the indecisive bouncing (before settling on Arthur).

Fangirl: Hellsing is possibly the best thing to ever come out of Japan. The plot is fun, the art is wonderful, and the characters are by no means two-dimensional. I’m really not sure what gender Alucard is and frankly, I don’t care; he can rock a Jackie O pillbox hat as well as he can a fedora.

Fangirl: Walter is the reason I am proud to have family from Britain. Arthur makes me laugh with his antics;

Arthur (thinking): Wait…who is this one even fangirling, anyway?

Fangirl: someday, though, according to canon, he will be a great father.

Fangirl: I admire Sir Penwood for keeping on top of all the craziness and you can’t help but love Alucard’s coffin; I wish my bed was as half as interesting. 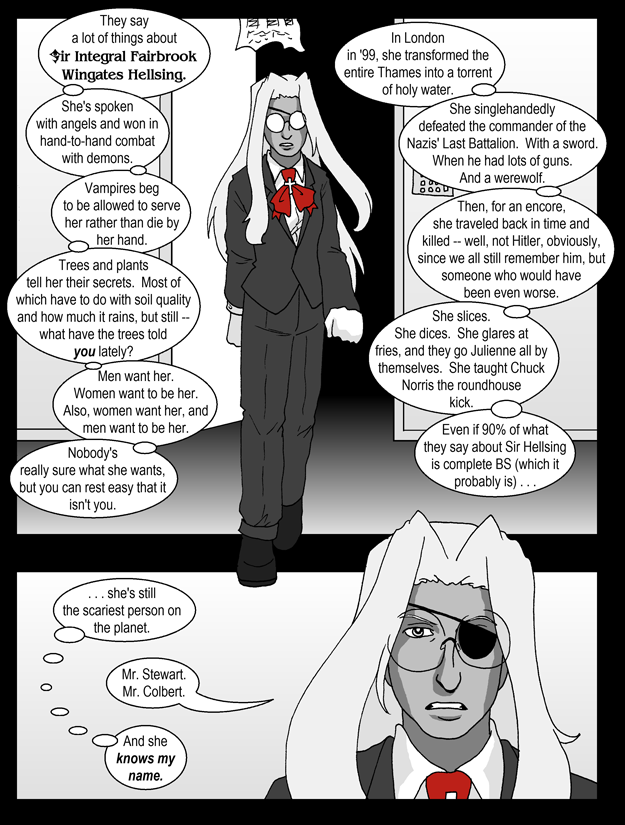 She’s spoken with angels and won in hand-to-hand combat with demons. Vampires beg to be allowed to serve her rather than die by her hand.

Trees and plants tel her their secrets. Most of which have to do with soil quality and how much it rains, but still — what have the trees told you lately?

In London in ’99, she transformed the entire Thames into a torrent of holy water. She singlehandedly defeated the commander of the Nazis’ Last Battalion. With a sword. When he had lots of guns. And a werewolf.

Then, for an encore, she traveled back in time and killed — well, not Hitler, obviously, since we all still remember him, but someone who would have been even worse.

She slices. She dices. She glares at fries, and they go Julienne all by themselves. She taught Chuck Norris the roundhouse kick. Even if 90% of what they say aobut Sir Hellsing is complete BS (which it probably is)…

…she’s still the scariest person on the planet.

Jon (thinking): And she knows my name.