Walter: Pull yourself together, or I’ll…

Fanboy: He can walk around carrying a pair of thompsons and make it looks easy. This is the greatest form he will ever take.

Girlycard: Arthur will be cross if you break one of his toys. Not that you’re any match for me in the first place.

Walter: I’ll sic Jeeves on you. 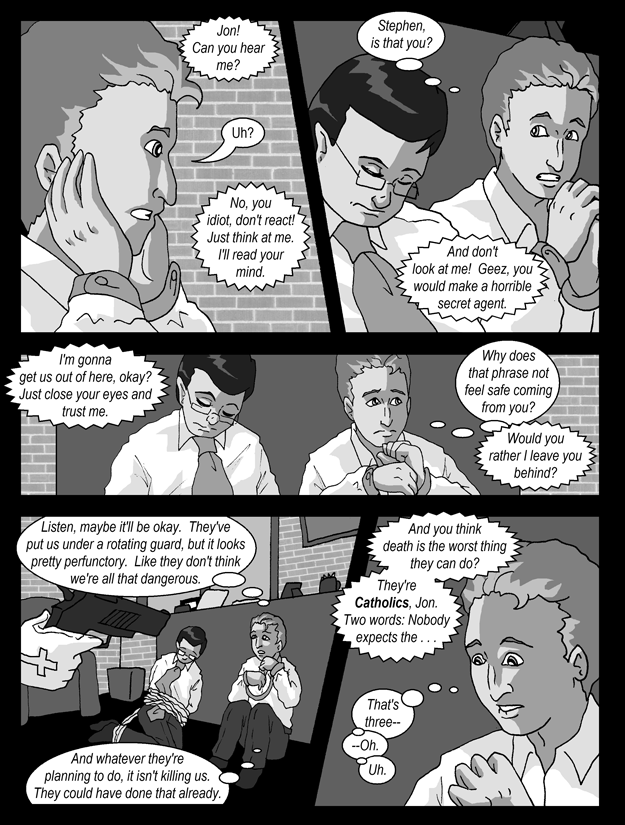 Our chief weapons are: the Colbert Bump, putting people On Notice…

Stephen (telepathy): Jon! Can you hear me?

Stephen (telepathy): No, you idiot, don’t react! Just think at me. I’ll read your mind.

Jon (thinking): Stephen, is that you?

Stephen (telepathy): And don’t look at me! Geez, you would make a horrible secret agent.

I’m gonna get us out of here, okay? Just close your eyes and trust me.

Jon (thinking): Why does that phrase not feel safe coming from you?

Stephen (telepathy): Would you rather I leave you behind?

Jon (thinking): Listen, maybe it’ll be okay. They’ve put us under a rotating guard, but it looks pretty perfunctory. Like they don’t think we’re all that dangerous. And whatever they’re planning to do, it isn’t killing us. They could have done that already.

Stephen (telepathy): And you think death is the worst thing they can do? They’re Catholics, Jon. Two words: Nobody expects the…