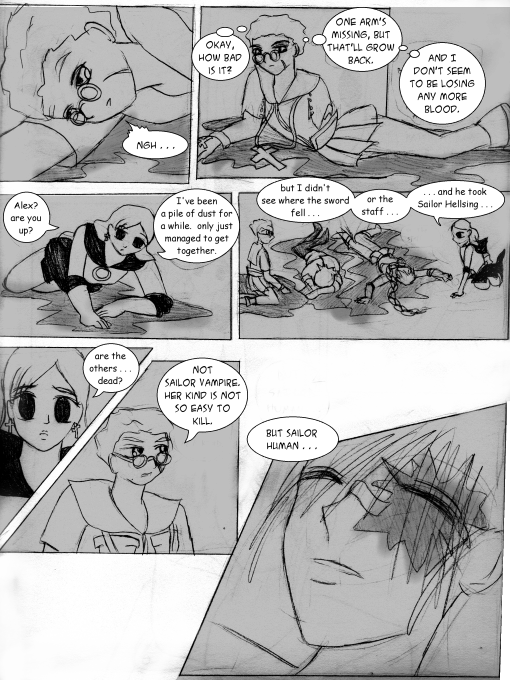 Alex (thinking): Okay, how bad is it? One arm’s missing, but that’ll grow back. And I don’t seem to be losing any more blood.

Kim: Alex? Are you up? I’ve been a pile of dust for a while. only just managed to get together.

Alex: Not Sailor Vampire. Her kind is not so easy to kill. But Sailor Human…

Marian: Hi, everybody! It’s me, Marian, with an update on the computer thing. Erin’s laptop has arrived! It looks very cool. It has a lot more memory than her last one, and a really big screen! Also, it came with something called “Windows Vista.” Isn’t that a pretty name?

Erin: Yes, “Allow.” Just like the last three times I ran this program.

Marian: Although it looks like there are still a few kinks to work out…this whole mess has really been getting her down! I wish there was something we could do…

Erin: Why do you have twenty-five critical updates? I just took you out of the box!

Marian: I know! It’s Erin’s birthday next week, so we can post a bunch of the neat presents she’s gotten over the years! That’s just got to cheer her up!

Erin: What do you mean, I need a whole new set of scanner drivers?