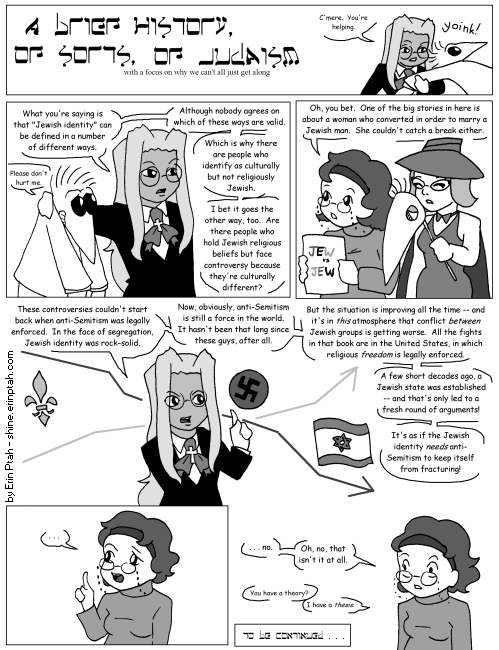 What you’re saying is that “Jewish identity” can be defined in a number of different ways. Although nobody agrees on which of these ways are valid. Which is why there are people who identify as culturally but not religiously Jewish. I bet it goes the other way, too. Are there people who hold Jewish religious beliefs but face controversy because they’re culturally different?

Erin: Oh, you bet. One of the big stories in here is about a woman who converted in order to marry a Jewish man. She couldn’t catch a break either.

Integra: These controversies couldn’t start back when anti-Semitism was legally enforced. In the face of segregation, Jewish identity was rock-solid. Now, obviously, anti-Semitism is still a force in the world. It hasn’t been that long since these guys, after all.

But the situation is improving all the time — and it’s in this atmosphere that conflict between Jewish groups is getting worse. All the fights in that book are in the United States, in which religious freedom is legally enforced.

A few short decades ago, a Jewish state was established — and that’s only led to a fresh round of arguments! It’s as if the Jewish identity itself needs anti-Semitism to keep itself from fracturing!

Integra: You have a theory?

Erin: I have a thesis.