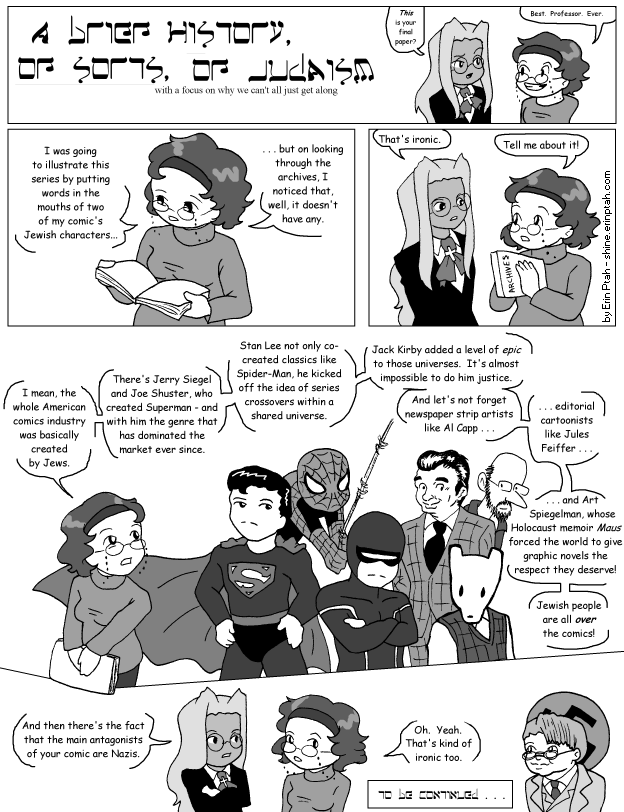 Yes, this (six-part series) is my actual final exam for the class Judaism: Faith and Practice. (The professor loved it.)

Integra: This is your final paper?

I was going to illustrate this series by putting words in the mouths of two of my comic’s Jewish characters…but on looking through the archives, I noticed that, well, it doesn’t have any.

Erin: Tell me about it!

I mean, the whole American comic industry was basically created by Jews. There’s Jerry Siegel and Joe Shuster, who created Superman — and with him the genre that has dominated the market ever since. Stan Lee not only co-created classics like Spider-Man, he kicked off the idea of series crossovers within a shared universe. Jack Kirby added a level of epic to those universes. It’s almost impossible to do him justice.

And let’s not forget newspaper strip artists like Al Capp…editorial cartoonists like Jules Feiffer…and Art Spiegelman, whose Holocaust memorial Maus forced the world to give graphic novels the respect they deserve! Jewish people are all over the ocmics!

Integra: And then there’s the fact that the main antagonists of your comic are Nazis.