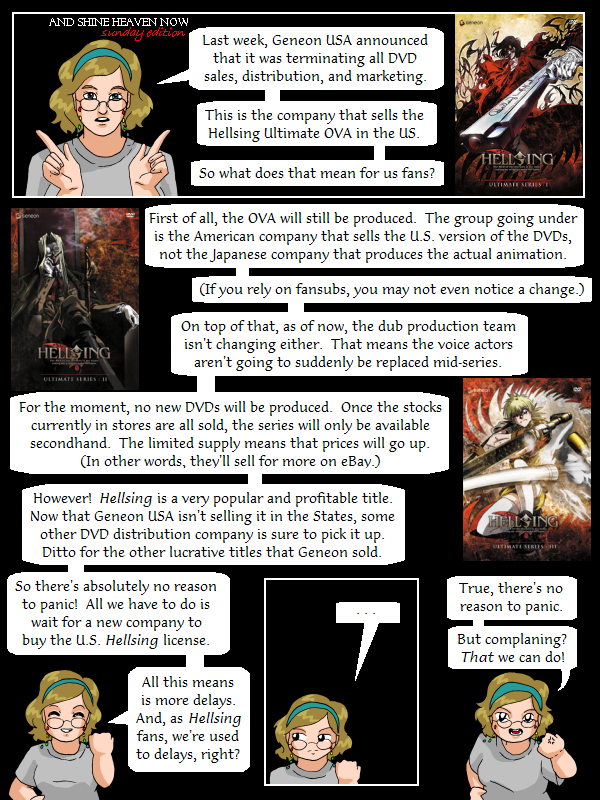 See if you can guess which old-fashioned British literary characters these involve! One should be obvious; the other, less so, but not unguessable

Integra: Not just any books.

This is an original manuscript. No, two of them. Both very old. According to the card, they have never been published. Agent Paper writes that they “may be of interest.”

Alucard: Which are you going to read now?

Integra: Neither. The code for “urgent” is “you might enjoy this.” “May be of interest” is code for “read when you have some free time.”

Integra: More vintage wine? It’s as if the entire Round Table is trying to get me drunk.

Is this one worth opening?

Alucard: It has some promise, Master…

It’s from Agent Paper. She, at least, knows enough that she wouldn’t send you a dress.

Integra: This should go without saying: Your invitations to the after-party are revoked. Dismissed.

Integra: This house is not an animal shelter.

Integra: However, this is no ordinary animal. It would be wise to keep our eyes on him. Take Walter and purchase some more appropriate clothing.

Pip: Yes, sir. I’ll grovel. I will get down on my knees and beg for your forgiveness. I will kiss the ground you walk on and lick your boots clean. I will–

Integra: Enough. You at least understand how colossal your error was.

You are on probation for the next month. Without pay. You will be off of the field and in the house, doing whatever the servants need done. If it means licking things, you will lick them. One word of complaint, and I’ll give you to Alucard instead. Now be silent.

Integra: You let Bernadette do this with no supervision? That’s the biggest failure of judgment here!

We’ve finally come to the last installment of Erin’s Adventures in England. At least, for this trip.

Integra: And as for you, Bernadette!

You let this vampire in! Disguised as a stripper, of all things! What the hell?

Pip: I’m sorry. I was an idiot. I wasn’t thinking.

I was shortsighted and careless and I put you and all of your guests in danger. It was unconscionable and stupid. Put me on probation, slash my pay, anything, it will be fully deserved.

Integra: I knew there was a reason I kept you, Bernadette. Grovel a little more.

Integra: And this! What is the deal with this?!

Seras: Sir, don’t be mad at him! He’s some kind of stray!

But he’s innocent, I swear, he’s safe, my Master checked…

Integra: Yes. I know. He told me. I have been waiting for you to tell me yourself. You do not keep secrets from me in my own household.

The next time I find that you have hidden something from me, I will not stop to yell. I will simply lock you in the basement for the next twenty years. Is that clear?

Integra: Victoria, you don’t seem to understand your position. Hellsing does not act in a vacuum. All of these men have influence over our work. Our money. Our equipment. Our weapons. Our standing with the Queen.

And none of them approve of you. They think you’re a dangerous liability. They are terrified that you will go out of control and start to help your fellow monsters. They think of you as vampire first, Hellsing second.

If I had berated you in front of them, they would have gone straight to the Queen. Some of them may go anyway. And the line will be, “See? We were right. Integra is putting all of us in danger.”