In the 42nd strip in this storyline, it’s only fair that there be a Hitchhiker’s Guide reference.

Walter: And if I could also mention, very briefly…

I can take a hint. I’ll be out in just a minute.

Walter: You don’t have to trouble yourself, sir…

Integra: On the contrary. A leader should not conduct too much business in the bath.

Walter: If I might for a moment touch upon the subject of your clothing…

Integra: We’ve been over this.

I’m not wearing the blue dress. Alucard likes it too much.

Walter: I only wanted to suggest, sir…

…that we ought to have you fitted for a tuxedo. 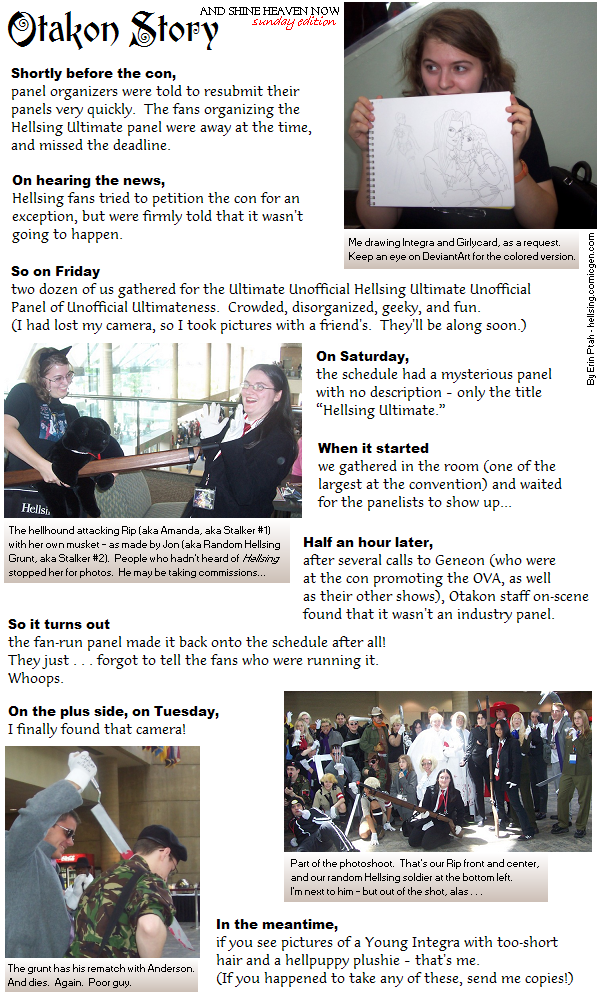 Integra: Anything useful in it, Walter?

And Sir Islands says he will be honored to attend.

Refers back to this trip (on which Pip took Seras to make up for an earlier blunder involving a wild rose).

Seras: Um, there was one other reason I wanted to see you. After the official party, with the Round Table knights, there’s going to be a smaller party. I’m invited, and I can bring one guest.

Pip: Whoa! Does this mean I’m forgiven for Paris?

Seras: Well…if you behave yourself…

The poster is of course from Labyrinth. I asked on the forum what movies people thought Seras would like; The Dark Crystal came up, and I almost went with that, but decided it was a little too fanciful.

For those who haven’t seen Labyrinth (and should see it as soon as possible), it’s the story of a teenage girl, lost and threatened, offered incredible power by a creepy-sexy monster King who doesn’t always obey the laws of gravity.

Pip: So why do you need my help to move things in? You’re stronger than I am.

Seras: You’re taller. Besides, I feel stronger than I have in a long time.

Pip: Why, what changed?

Seras: Wait, you’re in charge of the entertainment for Sir Integra’s party?

Seras: And not Walter? How did that happen?

Pip: I sort of owed him a favor.

Seras: How come? Did he do something for you, or did you just put bleach in the laundry?

Seras: Yes — and I remember why you thought I was inviting you.

Pip: Well, yeah, but cut me some slack…

“Helping you unpack the stuff from your flat” is not my ideal way to spend time in your room!

No coming today because the doujinshi-ka and all the main characters are still working on Harry Potter and the Deathly Hallows (but who am I kidding? — so are the readers.)

Pip: Mignonette? Are you there?

Pip: Are you hiding something from me?