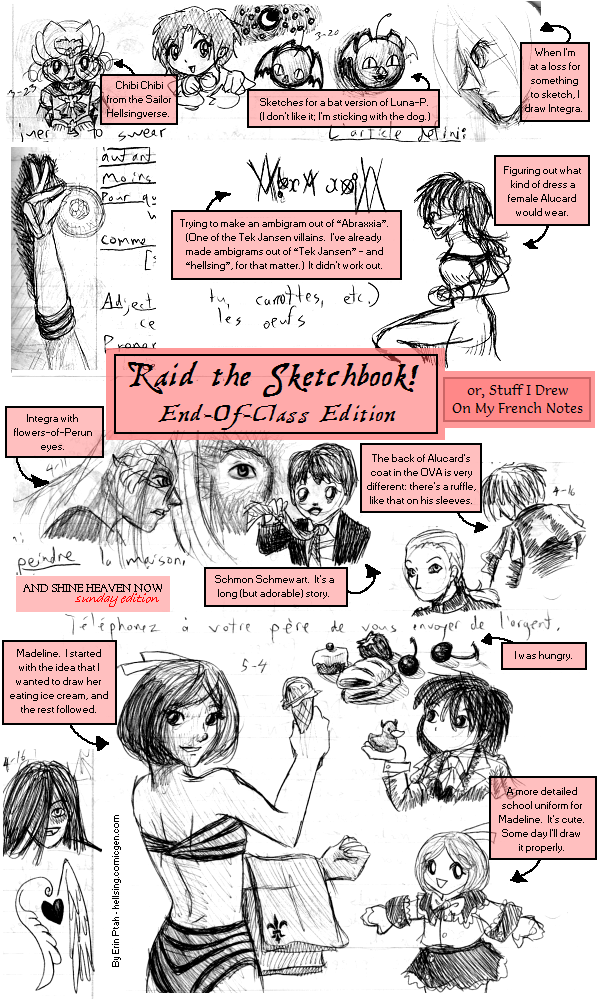 I’ve been working on Sailor Hellsing on and off; once exams are over I’ll crack down on it to the point where I’m ready to share it with the world.

Ambigrams (word designs that look the same upside-down and right-side-up) are fun, if frustrating. Here’s “Tek Jansen” and here’s “hellsing”.

The short version of the Schmon Schmewart story: Schmon is from a brief Daily Show parody (the Schmaily Schmow) that a TDS correspondent put together for a segment about YouTube.

– Chibi Chibi from the Sailor Hellsingverse.
– Sketches for a bat version of Luna-P. (I don’t like it; I’m sticking with the dog.)
– When I’m at a loss for something to sketch, I draw Integra.
– Trying to make an ambigram out of “Abraxxia”. (One of the Tek Jansen villains. I’ve already made ambigrams out of “Tek Jansen” — and “hellsing”, for that matter.) It didn’t work out.
– Figuring out what kind of dress a female Alucard would wear.
– Integra with flowers-of-Perun eyes.
– Schmon Schmewart. It’s a long (but adorable) story.
– The back of Alucard’s coat in the OVA is very different: there’s a ruffle, like that on his sleeve.
– Madeline. I started with the idea that I wanted to draw her eating ice cream, and the rest followed.
– I was hungry.
– A more detailed school uniform for Madeline. It’s cute. Some day I’ll draw it properly.