Alucard (thinking): I went into Integra’s dream to test and challenge her…

…and ended up being her knight, chauffeur, and therapist?

I have no idea how you did that. But I like it. I’m impressed…Master.

Alucard (thinking): She’s dropped out of the dream. Gone in a deeper state of sleep. That, or woken up. No point in my sticking around…

A deeper sleep it is. Lucky me. 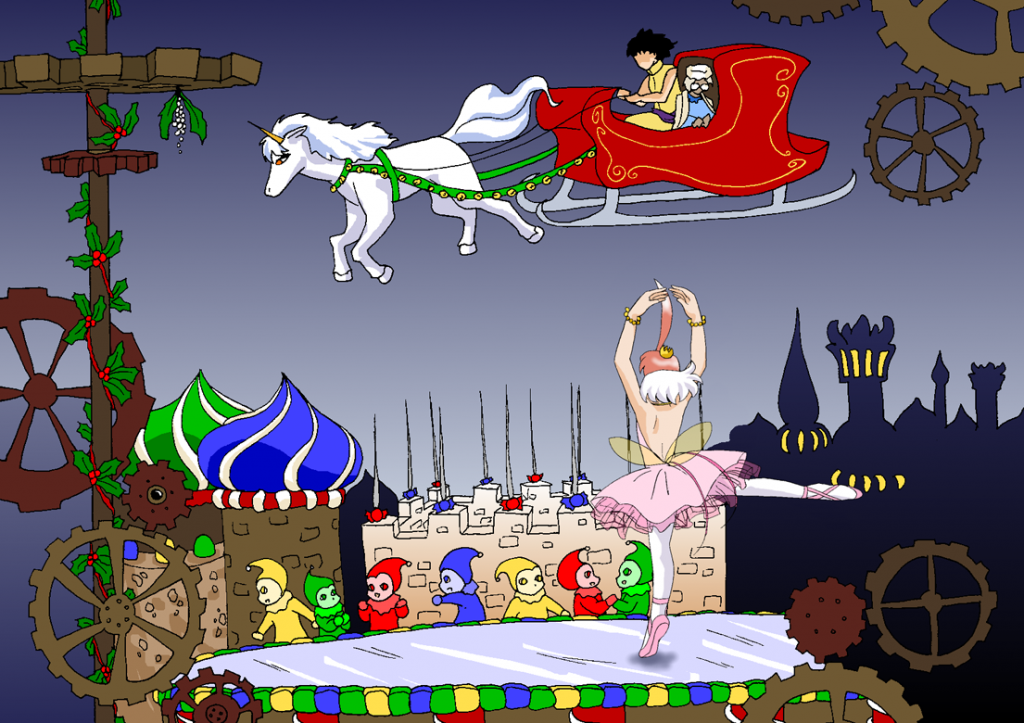 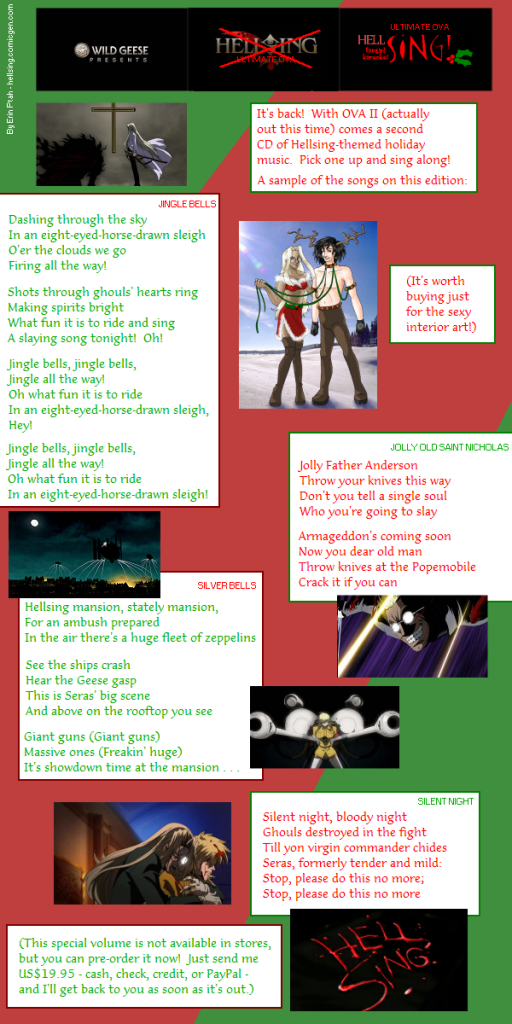 When I posted this year’s Christmas Fanservice on DA, Wire-Master left a comment that inspired “Jingle Bells”, and the rest of these followed from there.

It’s back! With OVA II (actually out this time) comes a second CD of Hellsing-themed holiday music. Pick one up and sing along! (It’s worth buying just for the sexy interior art!) A sample of the songs on this edition:

Jingle Bells
Dashing through the sky
In an eight-eyed horse-drawn sleigh
O’er the clouds we go
Firing all the way!

Shots through ghouls’ hearts ring
Making spirits bright
What fun it is to ride and sing
A slaying song tonight! Oh!

jingle bells, jingle bells
Jingle all the way!
Oh what fun it is to ride
In an eight-eyed horse-drawn sleigh, hey!

jingle bells, jingle bells
Jingle all the way!
Oh what fun it is to ride
In an eight-eyed horse-drawn sleigh!

Silver Bells
Hellsing mansion, stately mansion,
For an ambush prepared
In the air there’s a huge fleet of zeppelins

(This special volume is not available in stores, but you can pre-order it now! Just send me US$19.95 — cash, check, credit, or PayPal — and I’ll get back to you as soon as it’s out.)

Nor is it a north Chilean guanaco. (Closely related to the llama.) (And thus we add Monty Python to the growing list of allusions here.)

The sleigh is drawn by a wingless version of Helios, also from Sailor Moon. In SM canon, Helios shows up in all children’s dreams; this means that in Shine canon he must have ended up in Integra’s dreams at some point.

Alucard (thinking): I thought I was in control when I made the coat and the hat. But I had nothing to do with the sleigh. It came from the story we’re in.

How much control will I have over where this sleigh goes? I’ll find out, I suppose.

…At least it’s not drawn by a llama.

Alucard: How would you like a perfect world? One that you can stay in? I can give you that.

…Oh, that sleigh. Of course.

Integra: I know people need to die. You can’t deal with vampires if you don’t know that. I just want a world where people aren’t killed. A saner world. Reasonable. Kind.

And not so cold…

Alucard: What if I could give you that?

Alucard: Let’s start by taking care of the cold.