Decided to try drawing everything by hand – all the scenery, all the patterns, all the lettering. Miraculously, this lasted for the whole storyline.

Enrico (narrating): This is a tale of a time not so long ago. A tale of love and loss, friendship and family, trial and triumph. A tale of…

Enrico (past): ALEX! I can’t find my pendant!

Enrico (narrating): Well, a tale of before I got contact lenses. 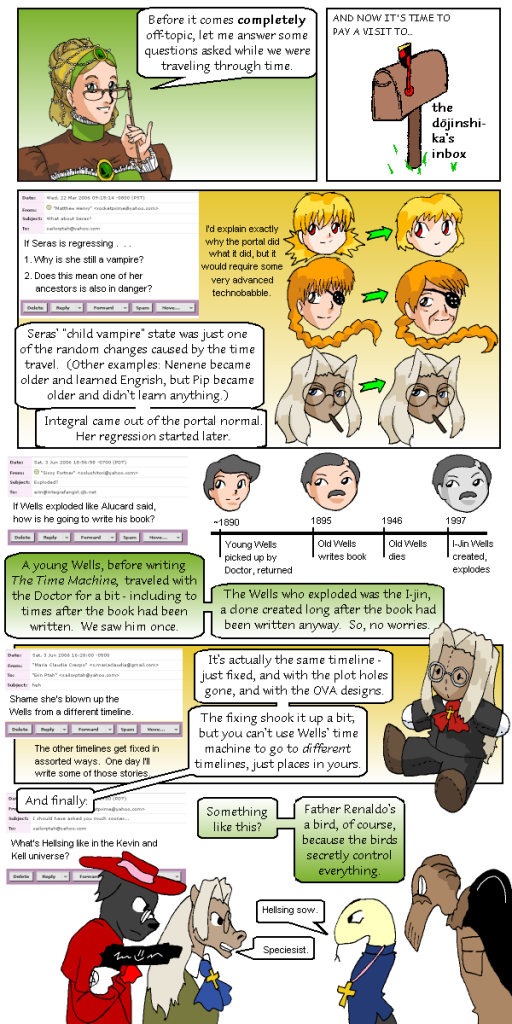 In this new timeline, the baobhan sith was never sent to attack Hellsing. We’ll see her again. Ditto for this other girl.

One more loose end to tie up, in a forest somewhere deep in Scotland:

Other baobhan sith: What do you mean? You haven’t been anywhere.

Laura: Really? I feel as if I’ve been very far away…

And, to keep things interesting, one new thread which I’m going to leave hanging:

Maggie: {Mama? Who was my father?}

Mom: {Do not ask useless questions, my daughter. They often turn into ominous foreshadowing.}

We have two strips left, so let’s tie up some loose ends. It’s still early morning by Earth reckoning, Greenwich Mean Time. Outside the mansion:

Guard (thinking): I really should get to sleep…but one more chapter can’t hurt.

Baalberith: It appears that, due to a temporal snag, you technically never existed. We have an opening in Human Resources that would be perfect for you.

And in Heaven, sphere whichever-they-feel-like-being-in:

Lisa: So, how do you two feel about guardian angel gigs?

That is of course Hakim in the photo, with his close friends the Joneses.

Alucard: What’s keeping you up?

Integra: Not that this is any of your concern, but:

It’s an old family photo album. I was thinking that it might be nice if time travel were really possible. There are people whom I would like to meet.

Integra: Officer Victoria, Captain Bernadotte! Escort the Catholics to the continent. Alucard, if there are any spies in the area, search and destroy. Goodbye, Maxwell. Agent Paper, take the author and rendezvous with Joker at…

Integra: …location seven. May God and Her Majesty be with you, Joker. Amen. Walter, where’s that cigar?

Thank you. Now, would you like to escort Agent Paper and Miss Sumiregawa?

Walter: How did you guess, sir?

Enrico: Sir Integral? I’d like my agent back now.

Integra: Much as I appreciate the confirmation that you’re tracking the agent on a supposed personal trip, it seems I have another call, which may be more important. Please hold.

Joker: Sir Integral? I’d like my agent back now.

Integra: Walter? I’m going to need a cigar to deal with this one.

Integra: Once this is through, you leave.

Heinkel: Back off, Sir Hellsing. We’re within our rights. We didn’t come here for business. It’s a free continent.

Integra: Not here for business, you say?

Heinkel: No. My boss just has the worst timing in the universe. 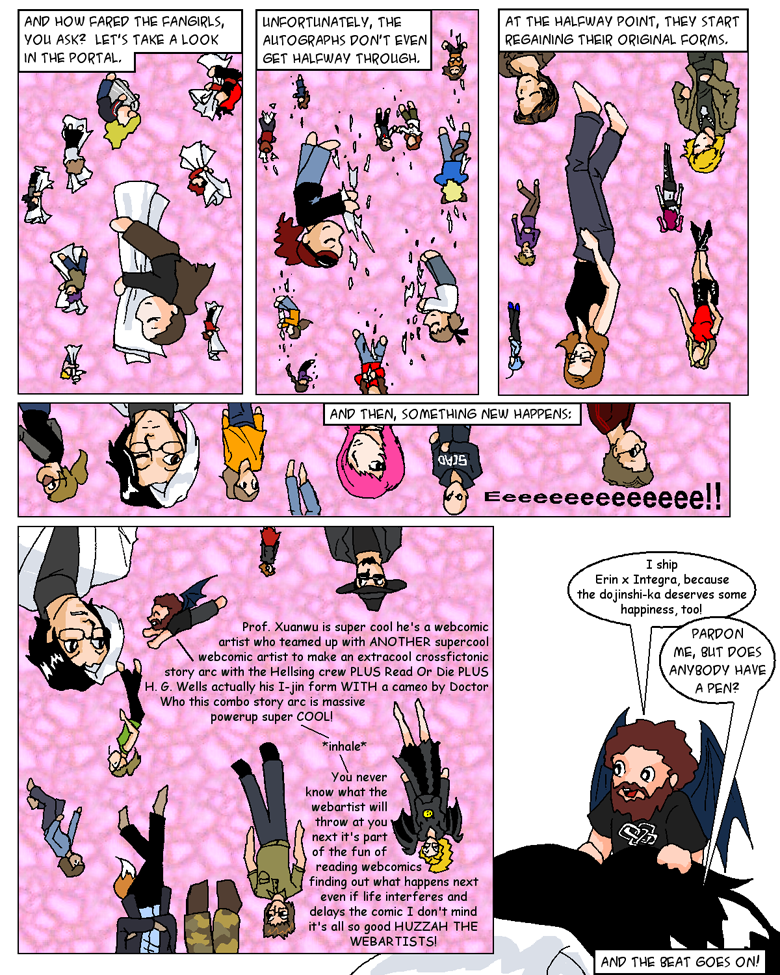 To the dismay of Walter as well as Yumiko and Yumie, Yomiko earned the title of “biggest fan” back in the first Read Or Die tankōbon.

Nenene: {I did say fangirls are all the same.}

Yumiko: {Thank you, Sumiregawa-sama — this means so much to me!}

Nenene: {Because my biggest fan is that woman there.}