Heinkel’s Austrian, so she has a good grasp of its history. Fortunately, Emma and William don’t. (Cut them some slack; it’s 1897. They have no idea how important Austria-Hungary will be in about seventeen years.)

And so, later, at the Jones mansion:

William: …and then Austria-Hungary is Wilhelm’s lap dog…

Integra: Don’t get into it, Heinkel.

Heinkel: But they can’t talk about Austria-Hungary like that! It can’t help needing an ally. Its military is so weak and it’s next to Russia. If Germany’s the only country that will back it up, then…

William: Oh, how cute! Look at you, trying to talk about international politics with the adults! Isn’t it just so sweet, Emma?

Hundreds, thousands, millions of them, and every one a life; and dogs to eat them, and cats too. All lives! All red blood, with years of life in it, and not merely buzzing flies!

Pip: Where are we now?

If you have a copy of Dracula, flip to this page and follow along!

Yomiko: Renfield, quoted in Dr. Seward’s diary, 3 October 1897: “I heard the dogs bark behind our house, but not where he was!”

We’re there. In the middle of Dracula. “He” is, at this moment, out in front of this building!

Pip: It’s after sunset…things should start to happen soon, right?

The reason why it was the Sixth Doctor who appeared: he’s just gone through the events of the serial Timelash, in which the real Herbert George Wells (pictured) travels on the TARDIS.

And, for good measure, inside the TARDIS:

Doctor: And that’s that.

Young H. G. Wells: Was that England? It looked like England.

Doctor: Yes. We took a slight detour. That was England a few years after your time.

Wells: This is all so exciting! Time travel, I mean.

Doctor: And you’re not getting any more of it, Herbert. Our next stop is to put you back where you belong.

Wells: That’s all right, I’ve learned so much already. Do you know, I think I may write a book! 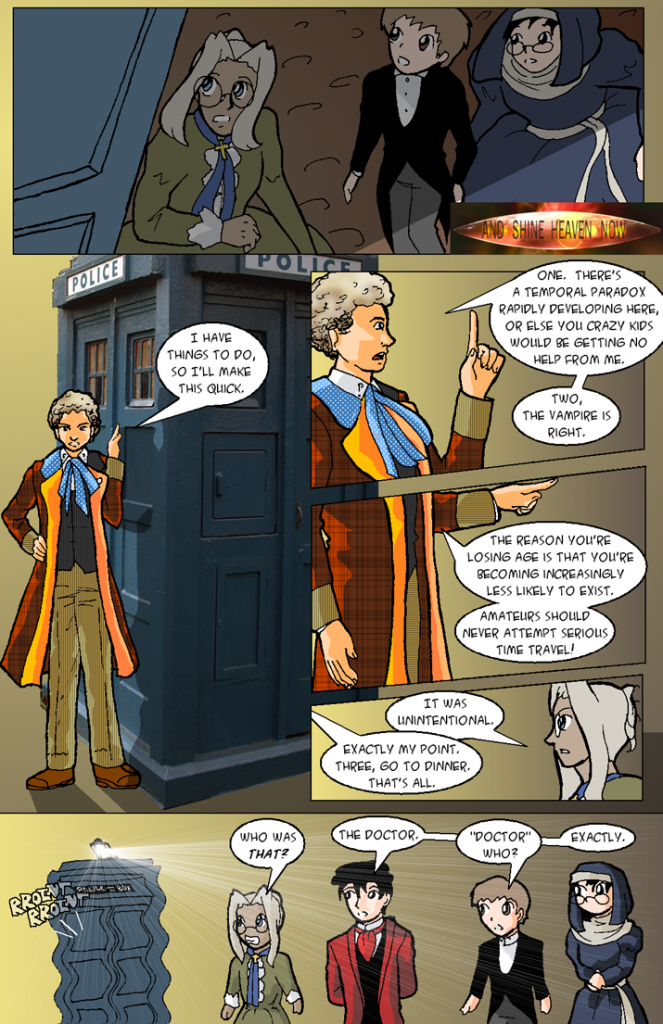 This is of course Colin Baker, the Sixth Doctor.

Doctor: I have things to do, so I’ll make this quick.

One. There’s a temporal paradox rapidly developing here, or else you crazy kids would be getting no help from me. Two, the vampire is right. The reason you’re losing age is that you’re becoming increasingly less likely to exist. Amateurs should never attempt serious time travel!

Integra: It was unintentional.

Doctor: Exactly my point. Three, go to dinner. That’s all.

Integra: Who was that?

Back outside the Lyceum Theatre:

Mr. and Mrs. William Jones…they invited you to dinner?

Yumiko: Yes, tonight. I told them we’re a group of 4, so you’re also invited.

Integra (thinking): There’s no reason to leave Stoker unguarded. On the other hand, we’ll need to eat at some point. Besides, the name looks familiar.

Alucard: I don’t sense any.

Integra: Where’d you leave the Catholics?

Integra: There you are. What have you two been up to?

Heinkel: None of your business. You’re not the boss of me!

Integra: Kid, as long as I control the vampire, what I say goes.

Yumiko: Heinkel saved a very sweet woman from being mugged. She invited us to dinner!

Alucard: I think we’re causing a paradox. If Wells succeeds in killing Van Helsing, you won’t be born.

As long as we don’t stop him, it gets more likely that he will succeed — and you get closer to birth. If he does succeed, your birth will reverse, and you will vanish.

Alucard: You did say that this was the ladies’ room.