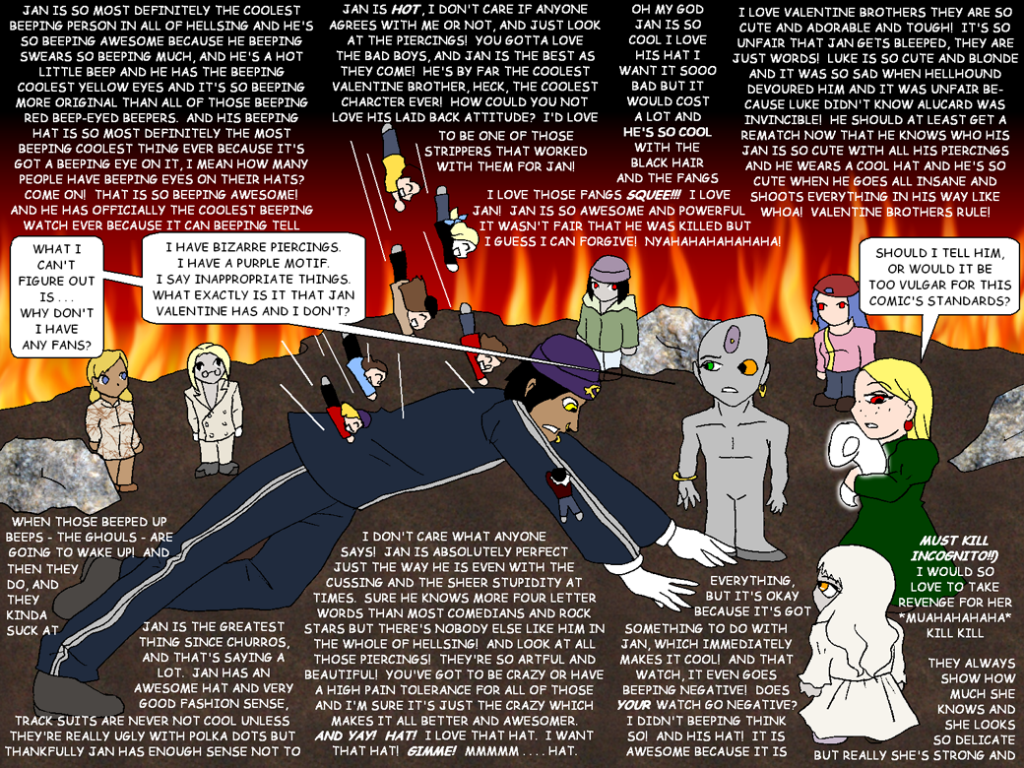 Incognito: What I can’t figure out is…why don’t I have any fans? I have bizarre piercings. I have a purple motif. I say inappropriate things. What exactly is it that Jan Valentine has and I don’t?

Laura: Should we tell him, or would it be too vulgar for this comic’s standards?

Fan 1: Jan is so most definitely the coolest BEEPing person in all of Hellsing and he’s so BEEPing awesome because he BEEPing swears so BEEPing much, and he’s a hot little BEEP and he has the BEEPing coolest yellow eyes and it’s so BEEPing more original than all of those BEEPing red BEEPed-eyed BEEPers. And his BEEPing hat is so most definitely the most BEEPing coolest thing ever because it’s got a BEEPing eye on it, I mean how many BEEPing people have BEEPing eyes on their hats? Come on! That’s so BEEPing awesome! And he has officially the coolest BEEPing watch because it can BEEPing tell when those BEEPed up BEEPs- the Ghouls- are going to wake up! And then they do, and they kinda suck at

Fan 2: Jan is the greatest thing since churros, and that’s saying a lot. Jan has an awesome hat and very good fashion sense, track suits are never not cool unless they’re really ugly with polka dots but thankfully Jan has enough sense not to

Fan 3: Jan is HOT, I don’t care if anyone agrees with me or not, and just look at the piercings! You gotta love the bad boys, and Jan is the best as they come! He’s by far the coolest Valentine brother, heck, the coolest character ever! How could you not love his laid back attitude? I’d LOVE to be one of those strippers there that worked with them for Jan!

Fan 4: I don’t care what anyone says! Jan is absolutely perfect just the way he is even with the cussing and the sheer stupidity at times. Sure he knows more four letter words than most comedians and rock stars but there’s nobody else like him in the whole of Hellsing! And look at all those piercings! They’re so artful and beautiful! You’ve got to be crazy or have a high pain tolerance for all those and I’m sure it’s just the crazy which makes it all better and awesomer. AND YAY! HAT! I love that hat. I want that hat! GIMME! Mmmmm…. Hat.

Fan 5: Oh my God Jan is so cool i love his hat I want it sooo bad but it would cost a lot and he’s so cool with the black hair and the fangs I love those fangs SQUEE!!! I love Jan! Jan is so awesome and powerful it wasn’t fair that he was killed but I guess I can forgive! Nyahahahahahaha!

Fan 1: everything, but that’s OK because it’s got something to do with Jan, which immediately makes it cool! And that watch, it even goes BEEPing negative! Does YOUR watch go negative? I didn’t BEEPing think so! And his ha! ir is awesome because it is

Fan 6: I love Valentine brothers they are so cute and adorable and tough! It’s so unfair that Jan gets bleeped, they are just words! Luke is so cute and blonde and it was so sad when hellhound devoured him and it was unfair because Luke didn’t know Alucard was invincible! He should atleast get a rematch now that he knows who he’s opponent is! Jan is so cute with all his piercings and he wears a cool hat and he’s so cute when he goes all insane and shoots everything in his way like whoa! Valentine Brothers Rule! Walter was so mean when he cut Jan’s arm! And Ceras was so mean too, you can’t attack from the back! Valentine Brothers Rock!!

Helena fan 1: MUST KILL INCOGNITO!!) I would so love to take revenge for her *muahahahaha* kill kill

Helena fan 2: they always show how much she knows and she looks so delicate but really she’s strong and