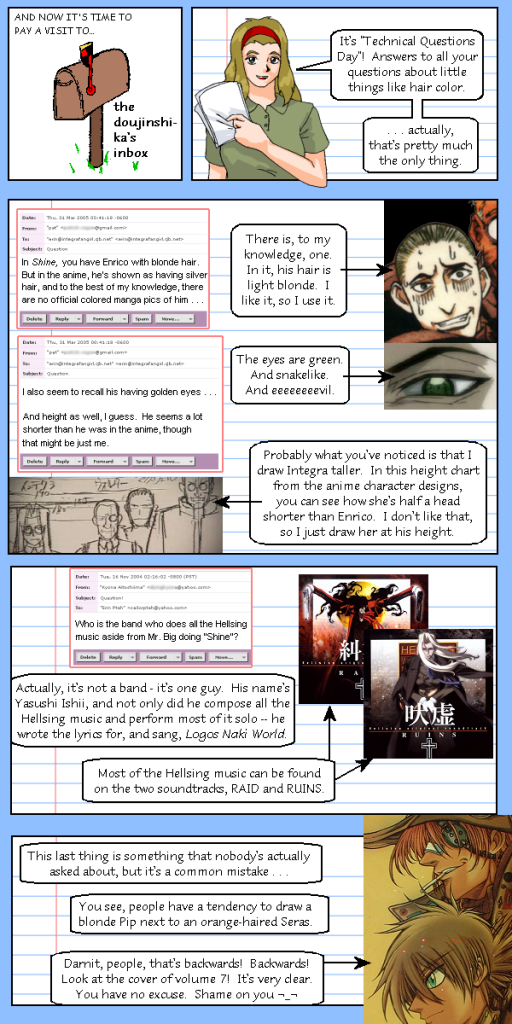 As for Seras’ eyes: When she’s human, they’re blue. In the TV series they turn red directly after she becomes a vampire. In the manga they don’t turn red until she becomes True Undead.

Erin: It’s “Technical Questions Day”! Answers to all your questions about little things like hair color. …actually, that’s pretty much the only thing.

Email: In Shine, you have Enrico with blonde hair. But in the anime, he’s shown as having silver hair, and to the best of my knowledge, there are no official colored manga pics of him…

Erin: There is, to my knowledge, one. In it, his hair is light blonde. I like it, so I use it.

Email: I also seem to recall his having golden eyes…

Erin: The eyes are green. And snakelike. And eeeeevil.

Email: And height as well, I guess. He seems a lot shorter than he was in the anime, though that might just be me.

Erin: Probably what you’ve noticed is that I draw Integra taller. In this height chart from the anime designs, you can see how she’s half a head shorter than Enrico. I don’t like that, so I just draw her at his height.

Email: Who is the band who does all the Hellsing music aside from Mr. Big doing “Shein”?

Erin: Actually, it’s not a band — it’s one guy. His name’s Yasushi Ishii, and not only did he compose all the Hellsing music and perform most of it solo — he wrote the lyrics for, and sang, Logos Naki World.

Most of the Hellsing music can be found on the two soundtracks, RAID and RUINS.

This last thing is something that nobody’s actually asked about, but it’s a common mistake…You see, people have a tendency to draw a blonde Pip next to an orange-haired Seras.

Darnit, people, that’s backwards! Backwards! Look at the cover of volume 7! It’s very clear. You have no excuse. Shame on you.