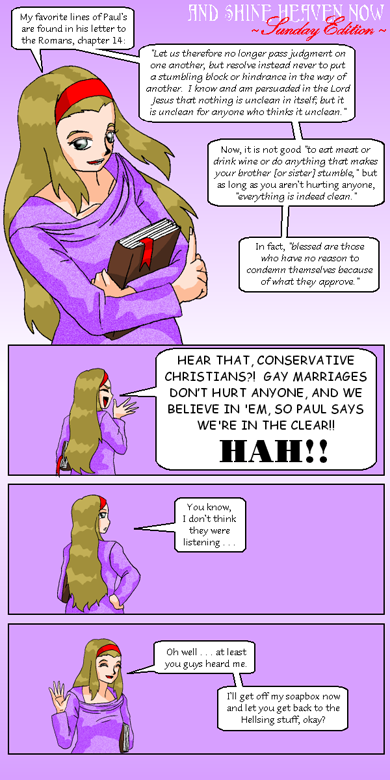 For the record, I’m a Pastafarian.

Erin: My favorite lines of Paul’s are found in his letter to the Romans, chapter 14:

“Let us therefore no longer pass judgment on one another, but resolve instead never to put a stumbling block or hindrance in the way of another. I know and am persuaded in the Lord Jesus that nothing is unclean in itself; but it is unclean for anyone who thinks it unclean.”

Now, it is not good “to eat meat or drink wine or do anything that makes your brother or sister stumble,” but as long as you aren’t hurting anyone, “everything is indeed clean.”

In fact, “blessed are those who have no reason to condemn themselves because of what they approve.”

Hear that, conservative Christians?! Gay marriages don’t hurt anyone, and we believe in ’em, so Paul says we’re in the clear!! HAH!

You know, I don’t think they were listening…

Oh well…at least you guys heard me. I’ll get off my soapbox now and let you get back to the Hellsing stuff, okay?