I’m trying to read this excellent book on African literature.

Too late. It’s turned into a book on the history of Irish farming…

Erin: Because a surprising number of you seem to have liked this feature, and because it’s easy to do, it’ll be back every once in a while. But first, I have lots of old sketches that I never used. So, without further ado, I give you:

The “Cleaning Out All The Badly Drawn Junk From Last Year” Special!

Major: Hooray! It’s war! I’m so happy! There will be a war again!
[My impression of the Major.]

I copied this Integra from the anime and this Alucard from the manga. They seem to have about the same look on their faces…

Remember, kids: To get better at something, you have to start out worse.

Integra: I told you not to interfere in my dreams, Alucard.

…Oh, I see. I’m dreaming about you of my own accord.

Which would explain why I’m finally in an outfit with a sensibly high neck.

It’s nighttime at the Hellsing house, and for once everyone is actually asleep at the same time. And they’re all dreaming.

Seras dreams. (Well, has a nightmare.)

Willis: The hills are alive-willis

Pip’s dreaming too, but I don’t think you want to see this one.

Integra: All right, cat — here are the ground rules.

I am not a cat person. I will tolerate your presence here, but if you disrupt my work you will be removed posthaste. Understood?

Good. So long as we understand each other.

Integra: Don’t you have anything better to do?

Walter: More important? Probably. More fun? Not in the least.

Pip: Who are you talking to?

Seras: Oh — my Master. He’s telepathic, you see. He was talking in my head.

Occasionally he’ll listen to what I’m thinking and give me his two pence. Actually, he might listen to me without telling me sometimes. I don’t know.

Pip: And this doesn’t bother you?

Seras: Well, of course it does. But what can you do?

Pip: In my opinion? That cannon of yours is there for a reason. 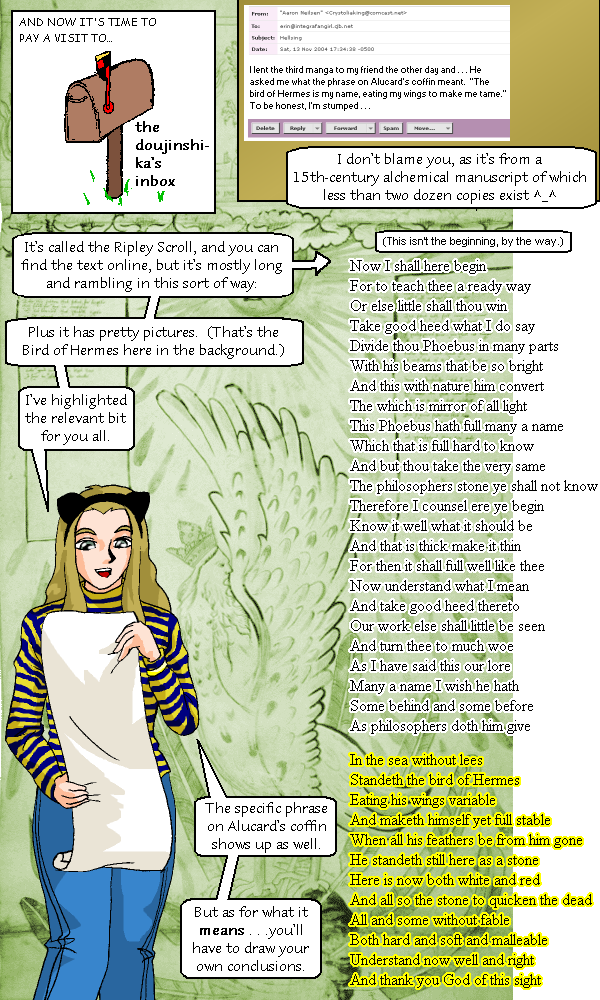 Seras: Hey, kitty, why aren’t you eating? Don’t you like salmon?

Alucard (telepathy): Cats are very much like vampires, police girl. The wild ones, at least.

Seras: How d’you figure that?

Alucard (telepathy): They like to kill their own meals.

The women are all characters found in Coyote, in case you’re wondering. (See the scans page for more.)

Seras: Let me get you some food.

Pip: Does she have a name?

Seras: Not yet. Do you have any ideas?

Seras: How are you coming up with these names?

Pip: They were all great p–
[SPLAT]
Hey! Now I have to wash my hair!

Seras: And you made me waste a can of food. So we’re even.