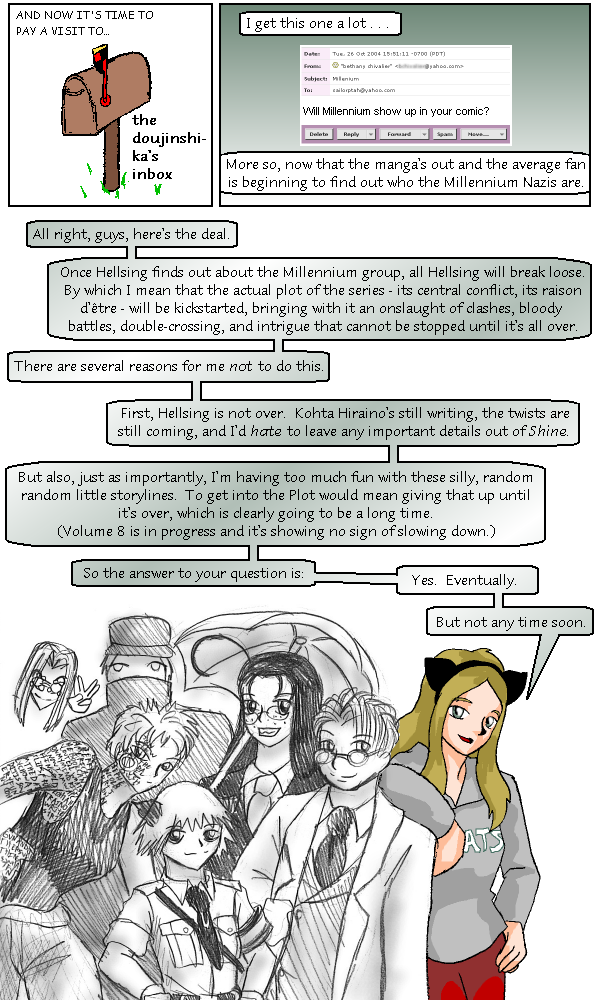 Note from The Future: Millennium’s first appearance in-universe is the 2005 Christmas storyline. The last chapter of the main Hellsing manga was published on September 30, 2008. Non-clandestine encounters between Hellsing and Millennium start appearing in Shine storylines at the start of 2009.

Erin: I get this one a lot…

Email: Will Millennium show up in your comic?

Erin: More so, now that the manga’s out and the average fan is beginning to find out who the Millennium Nazis are.

All right, guys, here’s the detail. Once Hellsing finds out about the Millennium group, all Hellsing will break loose. By which I mean that the actual plot of the series — its central conflict, its raison d’être — will be kickstarted, bringing with it an onslaught of clashes, bloody battles, double-crossing, and intrigue that cannot be stopped until it’s all over.

There are several reasons for me not to do this.

First, Hellsing is not over. Kohta Hirano’s still writing, the twists are still coming, and I’d hate to leave any important details out of Shine.

But also, just as importantly, I’m having too much fun with these silly, random little storylines. To get into the Plot would mean giving that up until it’s over, which is clearly going to be a long time. (Volume 8 is in progress and it’s showing no sign of slowing down.)

So the answer to your question is: Yes. Eventually. But not any time soon.