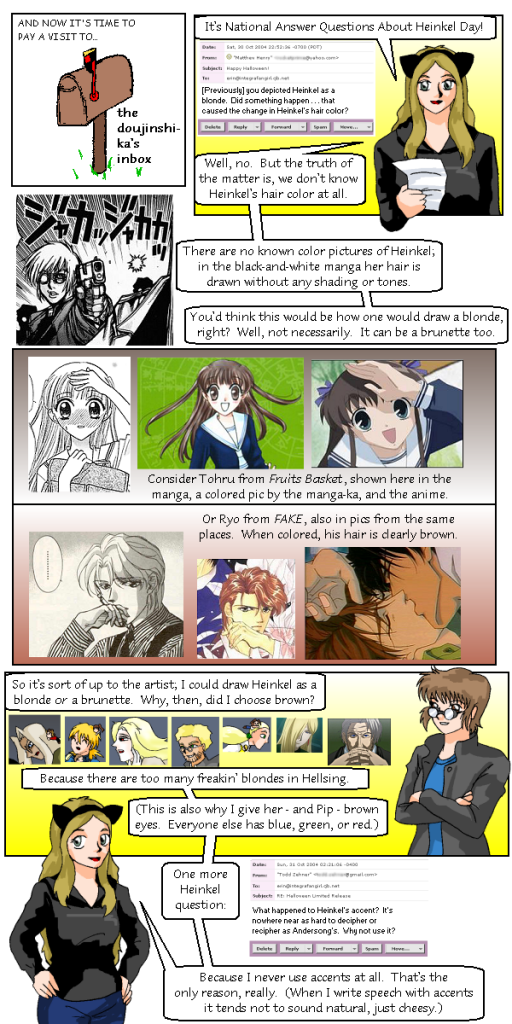 Email: [Previously] you depicted Heinkel as blonde. Did something happen…that caused the change in Heinkel’s hair color?

Erin: Well, no. But the truth of the matter is, we don’t know Heinkel’s hair color at all.

There are no known color pictures of Heinkel; in the black-and-white manga her hair is drawn without any shading or tones. You’d think this would be how one would draw a blonde, right? Well, not necessarily. It can be a brunette too.

Consider Tohru from Fruits Basket, shown her in the manga, a colored pic by the manga-ka, and the anime.

Or Ryo from FAKE, also in pics from the same places. When colored, his hair is clearly brown.

So it’s sort of up to the artist; I could draw Heinkel as a blonde or a brunette. Why, then, did I choose brown?

Because there are too many freakin’ blondes in Hellsing. (This is also why I give her – and Pip – brown eyes. Everyone else has blue, green, or red.)

Email: What happened to Heinkel’s accent/ It’s nowhere near as hard to decipher or recipher as Anderson’s. Why not use it?

Erin: Because I never use accents at all. That’s the only reason, really. (When I write speech with accents it tends not to sound natural, just cheesy.)