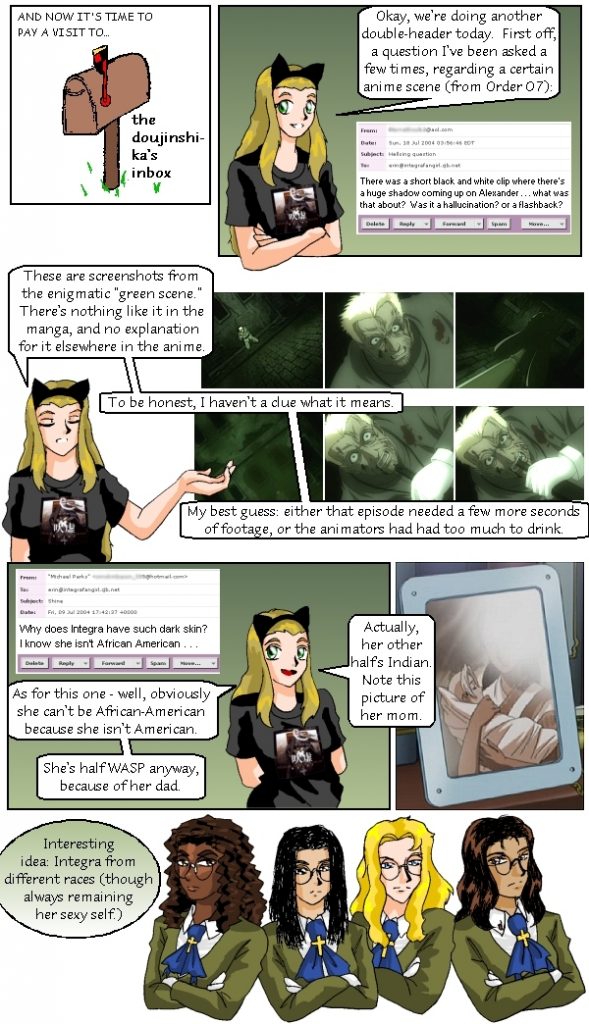 The T-shirt I’m wearing was made by the very awesome Bkwyrm.

And now it’s time to pay a visit to… the doujinshi-ka’s inbox!

Erin: Okay, we’re doing another double-header today. First off, a question I’ve been asked a few times, regarding a certain anime scene (from Order 07):

Email: There was a short black and white clip where there’s a huge shadow coming up on Alexander… what was that about? Was it a hallucination? Or a flashback?

Erin: These are screenshots from the enigmatic “green scene.” There’s nothing like it in the manga, and no explanation for it elsewhere in the anime. To be honest, I haven’t a clue what it means. My best guess: either that episode needed a few more seconds of footage, or the animators had had too much to drink.

Michael Parks: Why does Integra have such dark skin? I know she isn’t African American.

Erin: As for this one – well, obviously she can’t be African-American because she isn’t American. Sh’s half WASP anyway, because of her dad. Actually, her other half’s Indian. Note this picture of her mom. Interesting idea: Integra from different races (though always remaining her sexy self.)