Anderson: So what are they?

Walter: They adore us… but they have odd ways of showing it.

Integra: They’ll make us do bizarre things that we would never do normally. Kissing Alucard, for instance. And the only way to get them to let go…

That’s what this is for.

Fortunately for the characters, there aren’t any fans of the “other” AxI in this bunch.

Integra: All right. I’ll take Anderson; the rest of you, follow Walter down to the computer room and do a little research.

Anderson: I don’t take orders from you. Boss?

Enrico: Go with her. If she tries anything, you can handle it. And Alex?

Integra: Got to step in before the fight has a chance to start up again.

We keep some holy water downstairs for emergencies. I’ll show you.

Wait a minute… I’m at the door and there’s no sound of fangirls… Everyone out! Now!

For the love of Heaven, please tell me that you have some holy water in this house…

Anderson (thinking) If I don’t wash this off, what will God think of me? 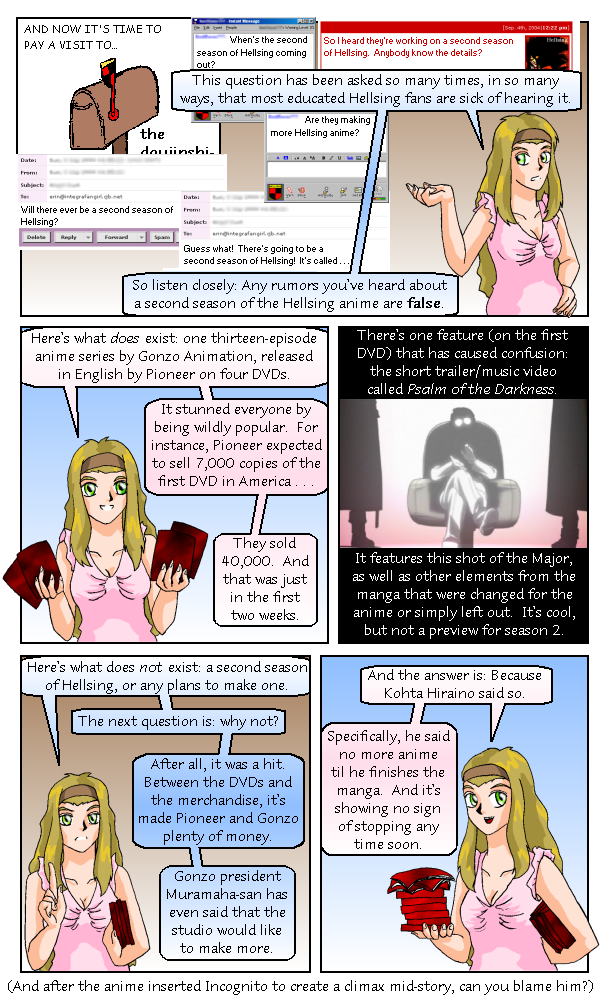 Willow’s not the only vehemently anti-AxA fangirl, but she was the most vocal.

Fangirl: Excuse me? You want to see what happens between Anderson and Arucard? One, they both strike me as pretty aggressively hetero, two they hate each other, three, the only time they see each other, they try to… well, admittedly do very phallic mutilations, especially Anderson, but he’s Catholic, and you know about them… Well, quite frankly, it just makes my teeth itch. I want to go out and bite every single last person who came up with it, wrote about it, drew it, etc. I mean, one of them might sodomize the other for the sake of proving his superiority, but I don’t think there’d be any romance there, and …. uh… I’ve gone too far, haven’t I? 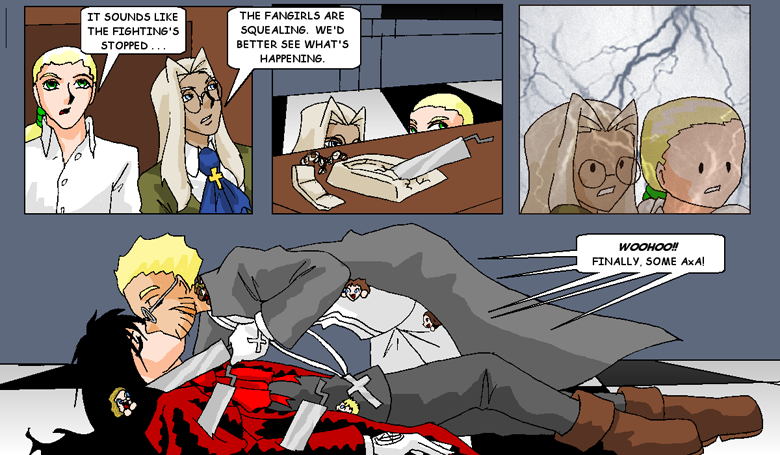 Fanboy: looks so cool and happy slaying things and he’s got the sweetest smile when not killing vampires and he takes care of orphans which is just so sweet and cool and kind like he is!!

The one non-fangirl-induced kiss in the entire storyline.

Pip: So… wait a sec… these fangirls can make you kiss anyone and you can’t do anything about it?

Seras: That’s right. Anyone they want. No matter how frustrating or–

Pip: Fangirls made me do it.

Seras: They did not!

Overenthusiastic fans are one thing, but in the case of Tommy the Walter fanboy they can be downright dangerous.

Tired of these yet? Don’t worry; this is the last one.)

Fanboy: Walter is the coolest he is the best in the whole series he could beat Alucard any day and Anderson really

sucks compared to him too and look I made my own gloves and I got the outfit too and watch my workwith the killer floss,

OMG I’m sure they can fix that and I floss every day.