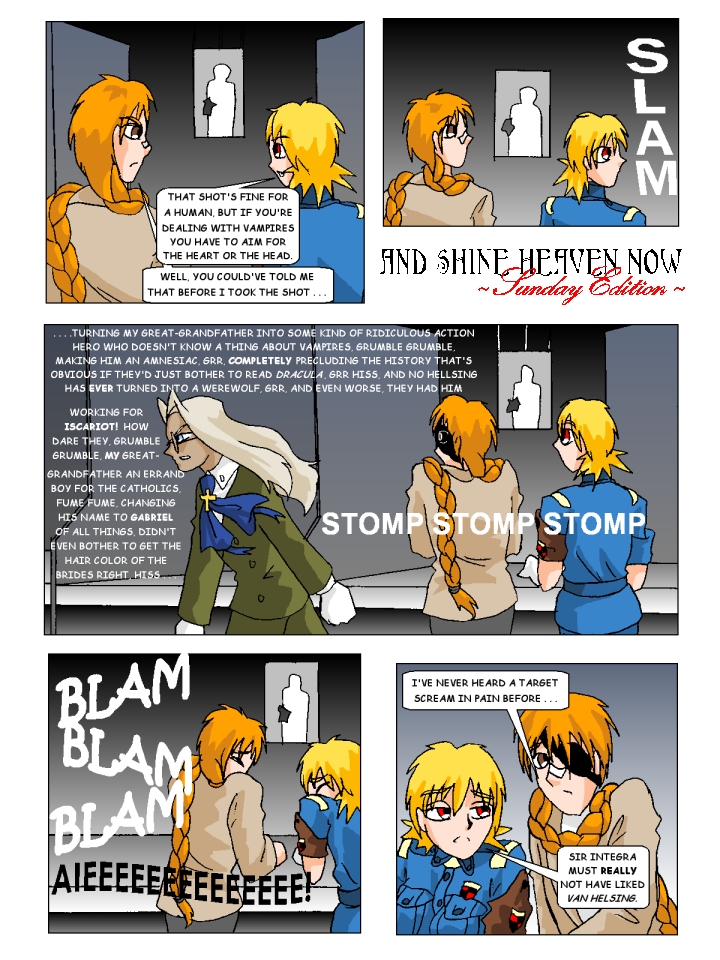 I wrote Integral’s rant about Van Helsing right after seeing it. Gabriel Van Helsing (they changed his name from Abraham) was working for a secret Catholic organization with the job of protecting the world from heathens and monsters. They didn’t say “Iscariot,” but I think we could all figure it out.

Note from The Future: The high-res original of this strip is MIA, so you get the compressed version from the original site instead.

Seras: That shot’s fine for a human, but if you’re dealing with vampires you have to aim for the heart or the head.

Pip: Well, you could’ve told me that before I took the shot…

Integra: …turning my great-grandfather into some kind of ridiculous action hero who doesn’t know a thing about vampires, grumble grumble, making him an amnesiac, grrr, completely precluding the history that’s obvious if they’d just bother to read Dracula, grr hiss, and no Hellsing has ever turned into a werewolf, grr, and even worse, they had him working for Iscariot! How dare they, grumble grumble, MY great-grandfather an errand boy for the Catholics, fume fume, changing his name to Gabriel of all things, didn’t even bother to get the hair color of the brides right, hiss

Pip: I’ve never heard a target scream in pain before…

Seras: Sir Integra must really not have liked Van Helsing.