Enrico: In other words… go ahead and call your sacrilegious pet.

Integra: … did you actually think I was waiting for your permission?

Integra: With my “sacrilegious pet” on board. 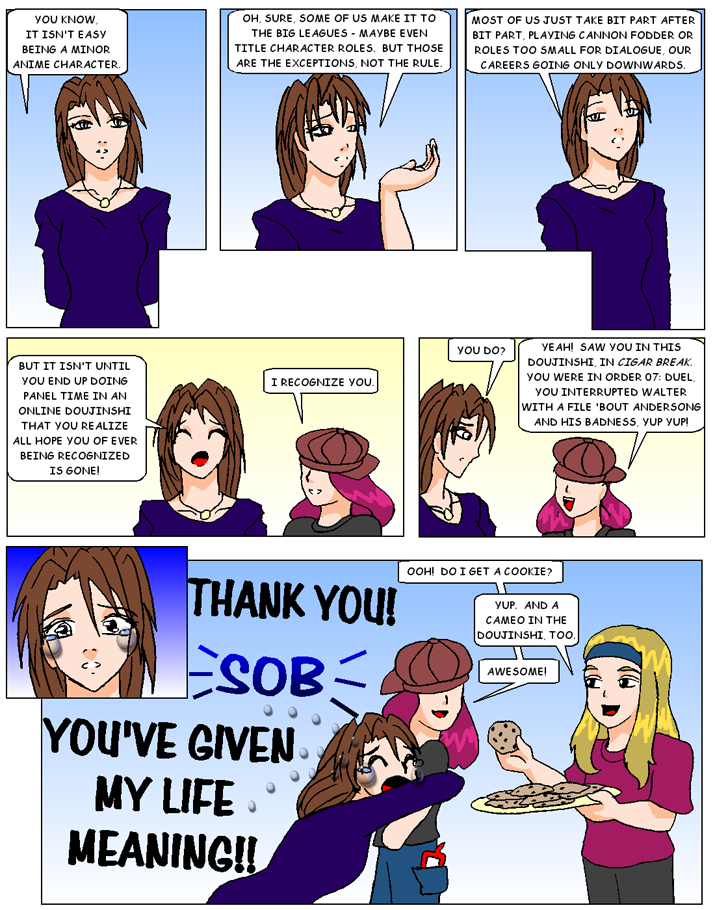 Integra (thinking): I’d say something like, “Who’s walking away now?”– but it’d probably make him come back. All right, let’s see what the rest of this island is like.

An hour or two later:

Integra (thinking): Back at the fire and the boat. The island’s larger than I thought, but no less empty.

Headset: I’m part of the problem, I confess / but I’ve gotta get this off my chest / Let’s extinguish the anguish for which we’re to blame / and save the world from going down in flames 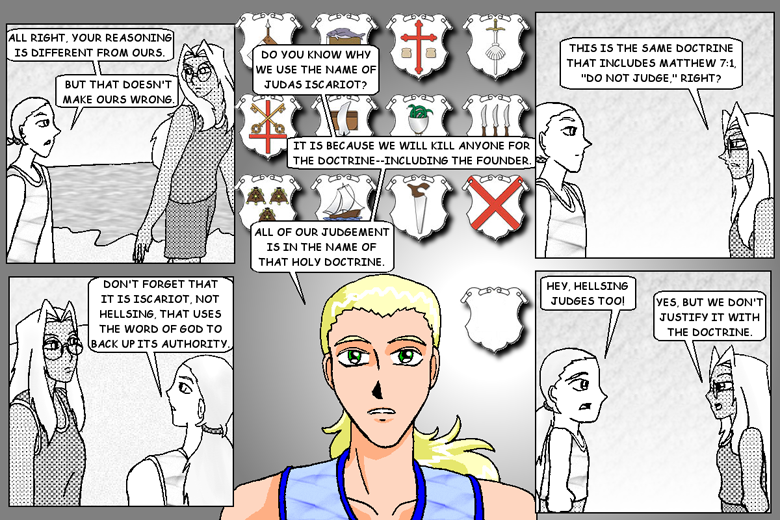 Those shields in the background represent the twelve apostles (including the one who was added after they kicked Judas out). Sometimes a blank shield is included with the twelve to represent Judas.

Enrico: All right, your reasoning is different from ours. But that doesn’t make ours wrong.

Don’t forget that it is Iscariot, not Hellsing, that uses the word of God to back up its authority.

Do you know why we use the name of Judas Iscariot? It is because we will kill anyone for the doctrine — including the founder. All of our judgment is in the name of that holy doctrine.

Integra: This is the same doctrine that includes Matthew 7:1, “Do not judge,” right?

Integra: Yes, but we don’t justify it with the doctrine.

Enrico: Look, not only are you a heretic… you’re a hypocrite! Your Hellsing Organization kills vampires for the same reason that Iscariot does–

Integra: No, Maxwell, it doesn’t. You kill monsters because you think that you have a god-given mandate to do so. Hellsing kills monsters to protect God’s people.

Enrico: Look, can’t you accept it when somebody’s trying to be nice?

Integra: The last time that you did anything ‘nice’ for me, you had your paladin killing my men behind my back. Why should I trust you?

Enrico: Well, for one thing, at the moment it’s to my advantage to help you… from a Machiavellian standpoint alone, we should trust each other. Besides, don’t you think people can better themselves?

Integra: Do you still think I’m a heretic for using vampires?

Integra: Then you haven’t changed.

Integra: Again, your common sense is overruled by your need to show off. Is this a Catholic failing, or a male one?

Enrico: Insulting my gender and religion in one shot? You’re slipping, Integra. It could very well be a Roman failing. Or perhaps it’s a perception failing. Your perception. I was, after all, trying to be nice.

Integra: I’m going for a walk.

Enrico: Hey! You can’t just walk away from me that easily! 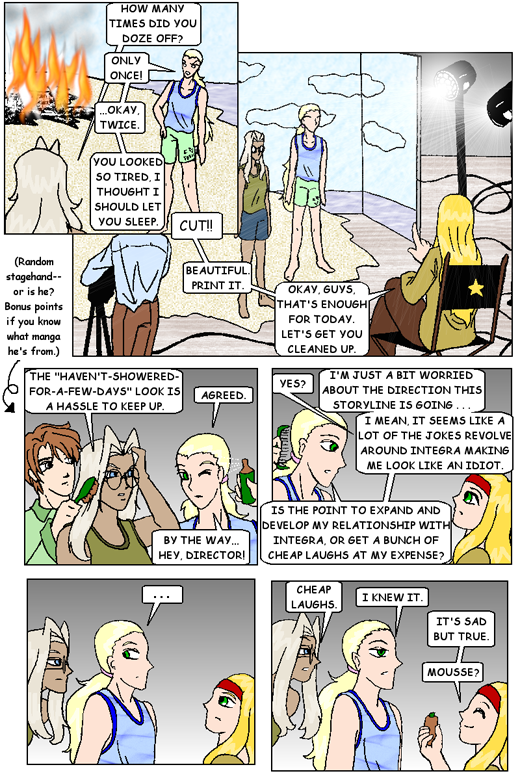 Integra: So how many times did you doze off?

Erin: CUT!! Beautiful. Print it. Okay guys, that’s enough for today. Let’s get you cleaned up.

[Random stagehand– or is he? Bonus points if you know what manga he’s from.]

Integra: The “haven’t-showered-for-a-few-days” look is a hassle to keep up.

Enrico: I’m just a bit worried about the direction this storyline is going… I mean, it seems like a lot of the jokes revolve around Integra making me look like an idiot. Is the point to expand my relationship with Integra, or get a bunch of cheap laughs at my expense? …

Enrico: I knew it.

Integra (thinking): Ugh… note to self: sand is uncomfortable to sleep on.

Integra: Morning? Were you up all night?

Enrico: Er… did you think you were the only one with amazing ability to stay awake?

So how many times did you doze off?

Alucard: Your point is made, Master. I will lead Captain Bernadotte to you; we will retrieve both you and Maxwell; his safety is assured. This dream will end now, and when you wake up, you should feel quite refreshed.

Integra: Good… to see you again…