In which the temporal crisis is pre-empted, and the healing can begin. Even though the unraveling of the timeline was stopped before it happened, it hasn’t escaped without a few knots. (For one thing, Seras’ uniform is suddenly yellow!) 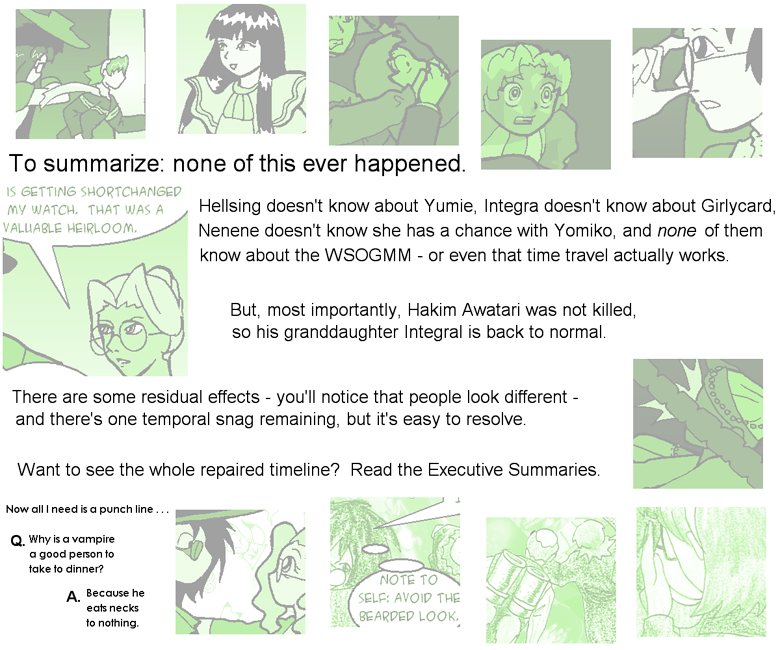 To summarize: none of this ever happened. Hellsing doesn’t know about Yumie. Integra doesn’t know about Girlycard. Nenene doesn’t know she has a chance with Yomiko, and none of them know about the WSOGMM – or even that time travel actually works. But, most importantly, Hakim Atawari was not killed, so his granddaughter Integral is… END_OF_DOCUMENT_TOKEN_TO_BE_REPLACED

It should be noted that, while I use the League of Extraordinary Gentlemen design for Mina Harker, Shine does not take place in the Leagueverse. (There would be continuity issues.) The idea of Setsuna’s shop here owes a debt to Tim Nolan’s Awakening, which I read years and years ago, and which Jaime B tracked… END_OF_DOCUMENT_TOKEN_TO_BE_REPLACED