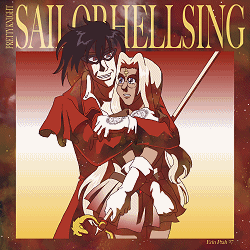 If you skipped straight here, because you didn’t want to slog through every poorly-drawn page: yeah, I don’t blame you.

Here’s an executive summary of the fun bits.

Scroll past Season 1 for the plot outlines of all the never-written arcs that would have come next.

Integra Wingates Van Helsing is having a tough teenagerhood. First she gets put in charge of a national vampire-hunting organization. Next her uncle tries to kill her. Then a talking dog shows up and reveals that she has magic powers.

It’s Alucard, of course — he’s all over this story. Under the names Alunacard and Alutimis, he awakens Sailor Hellsing and Sailor Vampire. As the mysterious Masked Vampire, he helps the Sailor Knights in battle. And as a “human” under the alias J. H. Brenner, he bothers Integra on subways.

Integra finds most of the Sailor Knights as classmates at school: 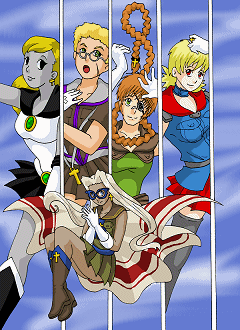 Sailor Regenerator — Alex Anderson, tough transfer student. Already had vampire-hunting experience as an experiment of the Iscariot Organization. Has some angst about whether she’s truly human.

Sailor Ghoul — Kim, school gossip and would-be reporter. Alucard kills her and turns her into a mindless ghoul, then Integra and Alex have to figure out how to activate her mindful sailor powers.

Sailor Human — Pip Bernadette, feisty captain of the football team. She’s also a big fan of the Sailor V video game, and introduces it to Alex, who realizes it’s a shockingly accurate depiction of vampire habits.

Together they fight various monsters-of-the-week, and have prophetic dreams about an invading Enemy.

Eventually they meet up with Seras, already Sailor Vampire, who bonds with Integra over the trauma of having recently-deceased fathers. (Seras and Kim both get their own rooms in Integra’s basement.) 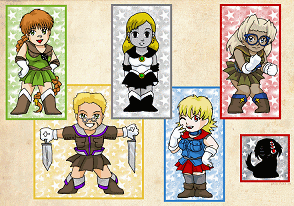 All this time Walter is helpful and supportive, and knows more about what’s happening than he lets on. 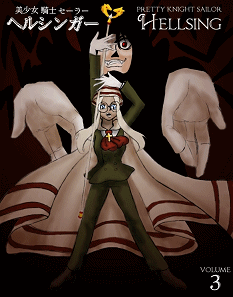 The Big Bad of this season is Incognito, who manages to catch our heroines off-guard in battle. Alucard gets temporarily dissolved while saving them, prompting Integra to awaken to her true identity as the Master of Monster. Part of her power is to know that Alucard isn’t dead. He’s just resting.

The team finds a secret message from Integra’s father — the previous Master of Monster — in the basement. Also, a cool sword.

They regroup and go after Incognito again — it still gets off to a bad start — Alex loses an arm (it’ll grow back) and Pip loses an eye (it won’t). Eventually they turn things around and stab Incognito with the cool sword. He did manage to summon Sett, but Integra summons Alucard, and together they take him down too. 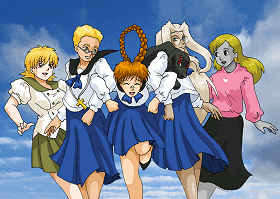 Just as they’re starting to bond, a tiny child falls out of the sky, crashes onto Alucard’s head, and demands Integra’s staff…

That’s right, in this AU the baobhan sith is Alucard and Integra’s child from the future.

With the help of high-tech gadget Alu-P, she hypnotizes Walter and the other Knights into believing that she’s “Integra’s little sister, Laura.” 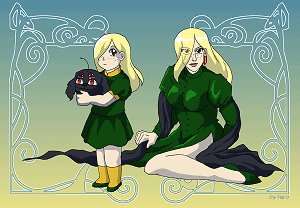 I…had not actually worked out who would be the Big Bad this season.

It’s been suggested that Enrico Maxwell would make a good Prince Diamond — white-haired pretty-boy with an equal rank to, and unhealthy obsession with, our main character. And that works very well! But with most of Iscariot already cast as Sailor Knights, it’s tough to fill in the rest of the Black Moon Clan.

In the few pages I actually drew, Luke and Jan Valentine took the place of the Ayakashi Sisters. Can’t remember if that was supposed to go anywhere. 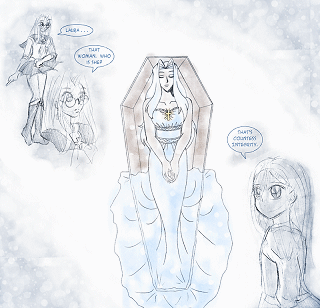 Point is, mumbletymumble is attacking the future city of Crystal London: a paradise where vampires and humans live together in harmony, ruled by Countess Integrity and her Count.

During the attack, [car horn] kills the respected vampire recluse Helena, who promptly awakens as Sailor Ghost, and uses her powers to send the Countess’ daughter Laura safely into the past.

At first Laura plans to yoink the staff of the Master of Monster. When the Sailor Knights gain her trust, she decides to bring the whole team to the future instead.

She gets briefly kidnapped by [loud coughing] and artificially aged into an evil form known as Highland Lady. (It’s a baobhan sith pun.) Thanks to her Hellsing blood, she has some control over Alucard, which leads to a battle of wills between her and Integra. Also she probably tries to make out with Integra at some point. Things get weird like that.

Finally Laura gets rescued and awakened as Sailor Dhampir, a Sailor Knight for future generations.

So obviously her parents decide to send her back into the past for training.

Herr Doktor is a mad scientist with an evil plan: turn Rip Van Winkle into a vessel for the Dark Messiah, known as Samiel. He’s going to put her original personality to sleep and then summon Samiel using the Three Holy Relics. 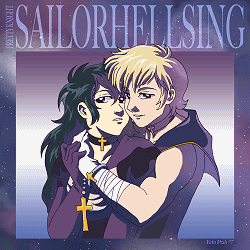 That’s why the Iscariots have come to town: they’re determined to find the Three Holy Relics first. No matter who they have to kill to make it happen.

Sailor Berserker — Yumie Takagi, alternate personality of Yumiko Takagi. Only Heinkel really understands and appreciates both of them.

Enrica Maxwell — not a senshi, just their handler. Beautiful girl who looks like a handsome boy. Tries to kiss Integra. Gets punched for her trouble.

For an extra twist, all of this causes a minor crisis of loyalty for Alex. (I didn’t work out her backstory in too much detail, but I think technically she never stopped working for Iscariot.)

Anyway, it turns out the Relics were inside our heroines all along! Heinkel has the Belt of Thomas, Yumie has the Sword of Saint Peter, and Alex has Helena’s Nail.

They use them to summon the Holy Grail, which lets Integra power up into Ultimate Sailor Hellsing. 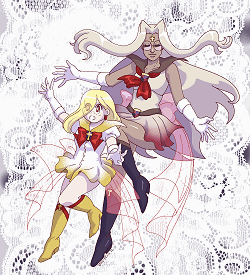 Also, they rescue Rip, and awaken her as Sailor Huntress. Working together, the full team takes out Samiel (and Doc along the way).

Bonus: The She is the corpse of Doc’s previous attempt at a Samiel-vessel. He was sure he’d get it right the second time. Honest.

Someone on TVTropes suggested the R.O.D characters get involved in Sailor Hellsing, just as they did in And Shine Heaven Now. I like it. And of course season 4 is the natural place for the characters from the Read or Dream manga….

So in place of the Amazoness Quartet, let’s have a young Yomiko, Michelle, Maggie, and Anita as the Paper Quartet. Their monsters-of-the-week this season are I-jin rather than vampires, and they’re run by the Dead Book Circus.

Eventually the paper-users get rescued from villainy and awakened as the Library Quartet, a team of auxiliary Sailor Knights who protect Sailor Dhampir in the future. 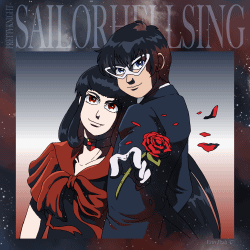 This isn’t a full season, it’s a movie. Or a bonus volume. Something like that.

We already know Arthur Hellsing was the first Master of Monster. This is where we find out that Alucard, in Girlycard guise, was the previous Sailor Vampire. Joining her on the battlefield was Young Walter, who ran around in a tuxedo and threw a lot of roses.

To squeeze in a full team, I’d cast a genderswapped young Shelby Penwood as the previous Sailor Human. Keeping with the Shine crossovers, Madeline de Paris would make a good original Sailor Regenerator…and, well, if Sailor Ghoul should be ditzy-but-cute, a genderswapped Bertie Wooster would fit the bill.

They fought Sailor Millennia, but weren’t able to actually defeat him. (Also, they lose track of the young Sailor Huntress in the process.) They only managed to send him into hiding. He’ll be back eventually…

Sailor Millennia is back — and he wants a great war.

Vampire Hunter D — a mysterious lonely soldier from far in the future — can be the equivalent of Sailor Cosmos. Instead of Chibi Chibi, imagine a tiny form who goes around saying nothing but “Didi.”

Count D (the one from Pet Shop of Horrors) would make a beautiful stand-in for the Chinese-influenced Kakyuu, wouldn’t he? I don’t know if we can pull off all three Starlights, but Leon(a) Orcot would definitely cross the galaxy to find D if he had to. And it’s not hard to see him getting an awkward crush on Integra for a while.