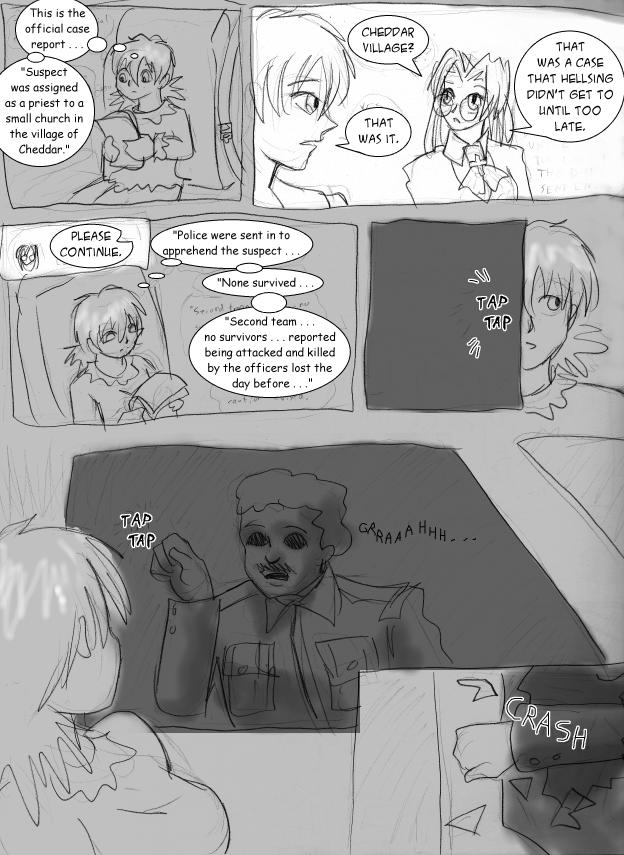 Seras (thinking): This is the official case report…”Suspect was assigned as a priest to a small church in the village of Cheddar.”

Seras: That was it.

Integra: That was a case that Hellsing didn’t get to until too late.

Seras (flashback, thinking): “Police were sent in to apprehend the suspect…None survived…Second team…no survivors…reported being attacked and killed by officers lost the day before…”

I find it interesting just how much Seras’ appearance can change simply from whether or not you can see her huge… tracts of land. I mean, look at Seras in these two comics. In the last few panels of the first comic and the first few panels of the next comic, Seras comes across as a little girl. This is due in part to her clothing, but there is also her height compared to that of her father and the car seat. Well, that and having a line like “Don’t leave me alone here, Daddy!” However this is then shifted around almost completely by the second to last panel in the second comic, where you can suddenly see she’s got assets almost the size of her head.

Of course, I believe that a lot of people when then faced with what she got in the last panel, a ghoul punching through the window to get at her, would then go back to leaving the impression of a little kid by promptly soiling themselves. It’ll be interesting though to see just how Seras reacts to it.

If you take her….shape in the first comic you mention ed then compare it to her hieght in the car seat …that would mean that she started developing young. I’m not ure how long it takes to maker a videogame but i can assume that she’s a bit older now. That could let be a bit more “mature” nowcompared to then

But if Seras gets killed in Cheddar then wouldn’t she have stopped developing then?

EDIT: Plus Seras said it was only “a couple of months ago”

* goes back and checks*

Seras is deliberately drawn to look younger in the flashback. I figure she’s had to mature a lot in the past couple of months.

And you’re quite right to notice that it takes more time than that to develop a video game 😀 (Plot point!)