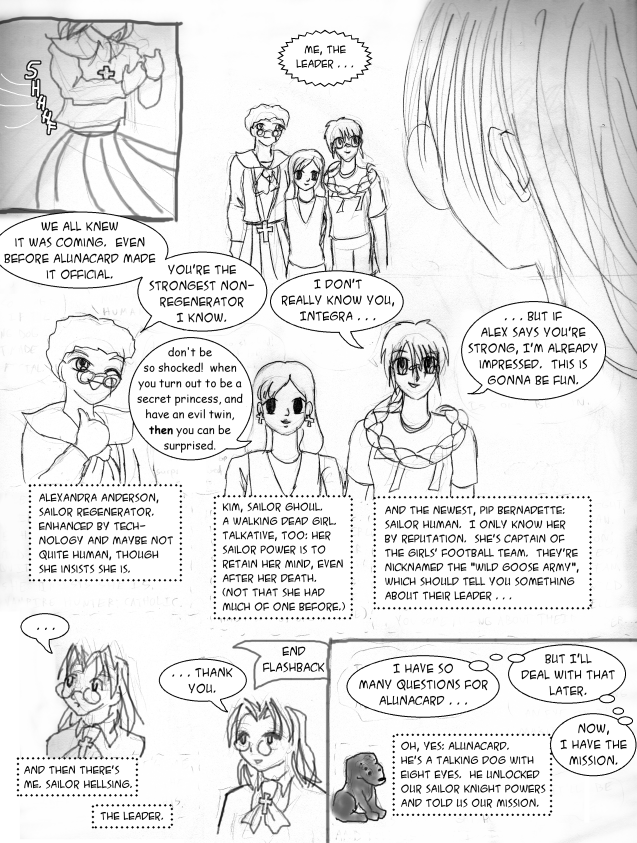 Integra: Me, the leader…

Alex: We all knew it was coming. Even before Alunacard made it official. You’re the strongest non-regenerator I know.

Narration: Alexandra Anderson, Sailor Regenerator. Enhanced by technology and maybe not quite human, though she insists she is.

Kim: don’t be so shocked! when you turn out to be a secret princess, and have an evil twin, then you can be surprised.

Narration: Kim, Sailor Ghoul. A walking dead girl. Talkative too: her sailor power is to retain her mind, even after her death. (Not that she had much of one before.)

Pip: I don’t really know you, Integra…but if Alex says you’re strong, I’m already impressed. This is gonna be fun.

Narration: And the newest, Pip Bernadette: Sailor Human. I only know her by reputation. She’s captain of the girls’ football team. They’re nicknamed the “Wild Goose Army”, which should tell you something about their leader…

And then there’s me. Sailor Hellsing. The leader.

Integra (thinking): I have so many questions for Alunacard…but I’ll deal with that later. Now, I have the mission.

Narration: Oh, yes: Alunacard. He’s a talking dog with eight eyes. He unlocked our Sailor Knight powers and told us our mission.