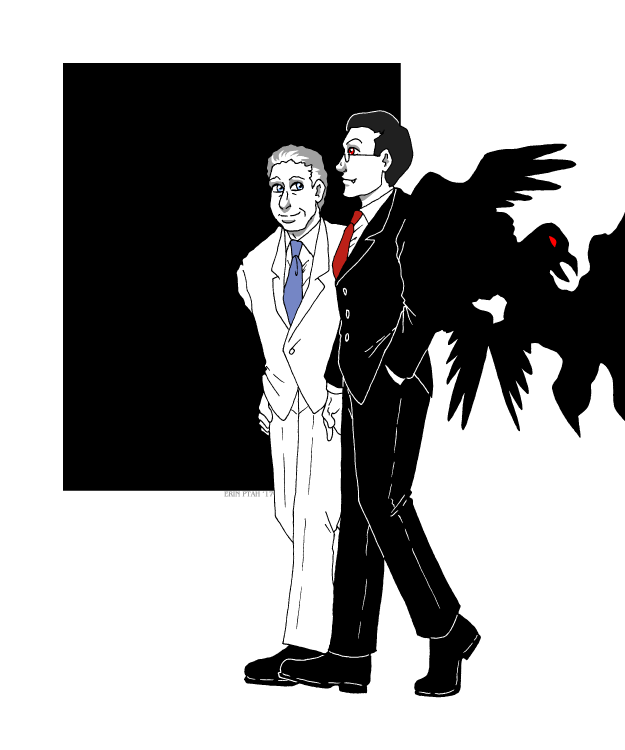 Stephen Colbert is a vampire. The Hellsing Organization is after him. Jon Stewart really wishes he’d stayed home today.

To read the comic:
Start from Page 1

Other things to read:
Side stories (AO3)

The Eagle of Hermes opens nine years after the climactic battle of Hellsing, and five minutes before The Colbert Report‘s tragic demise of Bobby the stage manager. It also takes place in the same universe as And Shine Heaven Now. If you’re not familiar with any of those, you’ll still get enough backstory in-strip to follow the action.

In spite of all that, it’s a comedy. Sort of.

This came perilously close to being one of those epic crossovers that I only draw a few pages of. I got partway through chapter 1 and then abandoned it for almost a year before picking it up again. (Cookies to anyone who can tell where the art style shifts.)

But I finished it! At the time, in 2010, it was longest single comic project I’d ever completed — it clocks in at exactly 100 pages (before the side stories). And it covered all the scenes I wanted to cover, wrapped up all the plot points I needed it to wrap up, hit all the narrative-kink notes I was hoping to hit.

Looking back on it from The Future of 2017, the script still holds up. The art shows plenty of room for improvement — so many wonky faces — but the writing? Solid, all the way through.