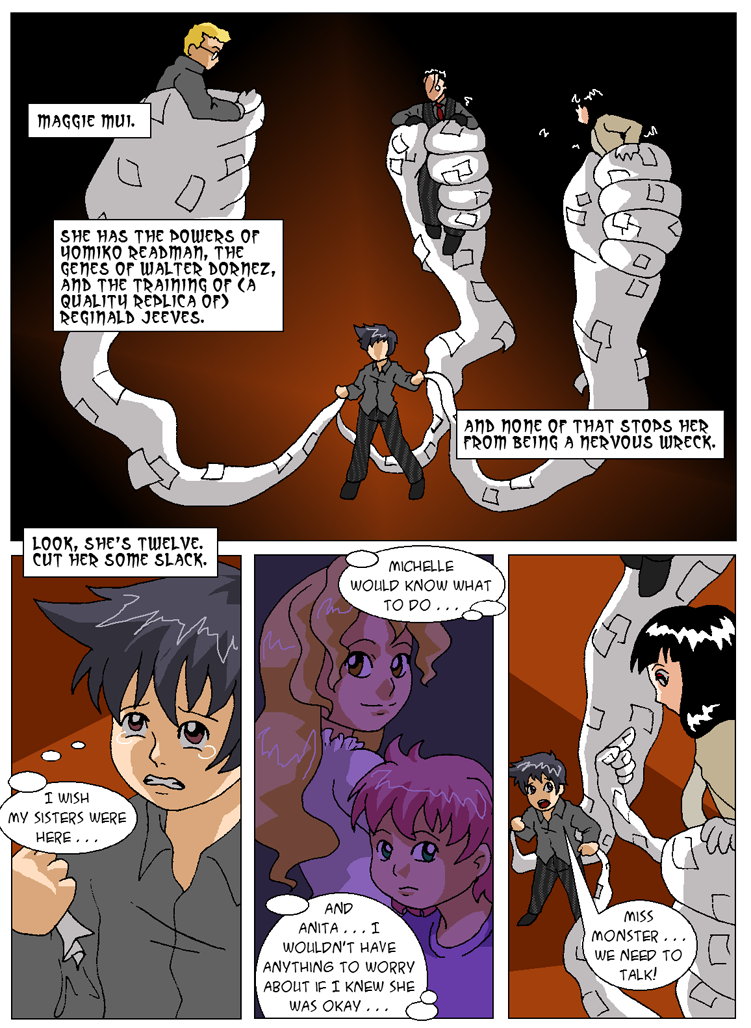 Maggie was still wearing parts of her pinstriped suit under the nifty paper outfit. You may remember that Michelle is in Los Angeles, where she is also being controlled with threats to Anita.

Maggie Mui. She has the powers of Yomiko Readman, the genes of Walter Dornez, and the training of (a quality replica of) Reginald Jeeves.

And none of that stops her from being a nervous wreck. Look, she’s twelve. Cut her some slack.

Maggie (thinking): I wish my sisters were here…

New comic up, and our paper user is out of her depths.

Also, it looks like Erin has a new comic in the making and didn’t tell anyone. http://erinptah.com/catperson/

Hey, I mentioned it on my blog! And my Dreamwidth! And my deviantART! A true fan would be watching all three X3

…In all seriousness, I’ve been meaning to promote But I’m A Cat Person on Shine. Just my luck, after months of Integra-themed websites and various sketchdumps, I finally have a string of storyline-related strips that need to go up on Sundays.

Can anyone who’s more versed in TVTropes set up a page for it? I added a link to the Shine trope page, but because it’s a punctuated title it requires some technical trickery that I haven’t worked out yet.

Oddly, boss, it seems that page has been locked. Anyone know why?

EDIT: Um…never mind, the page is open and ready to go. Trope away, people!

TVTropes is weird about titles with punctuation in them — the locked page you saw was some kind of “default redirect for a title with a punctuation mark” shell. The currently existing page…avoids the problem altogether and uses “Im” in the title instead of “I’m”.

Hopefully someone will know how to make the proper page eventually…in the meantime, I filled in some text at the current one, which can be copied over later.

Agreed. It was a pain and a half to create a punctuated page the first time I tried it.

Clearly, the solution is to change the name to “But Imma Cat Person” and give them all Scottish accents.