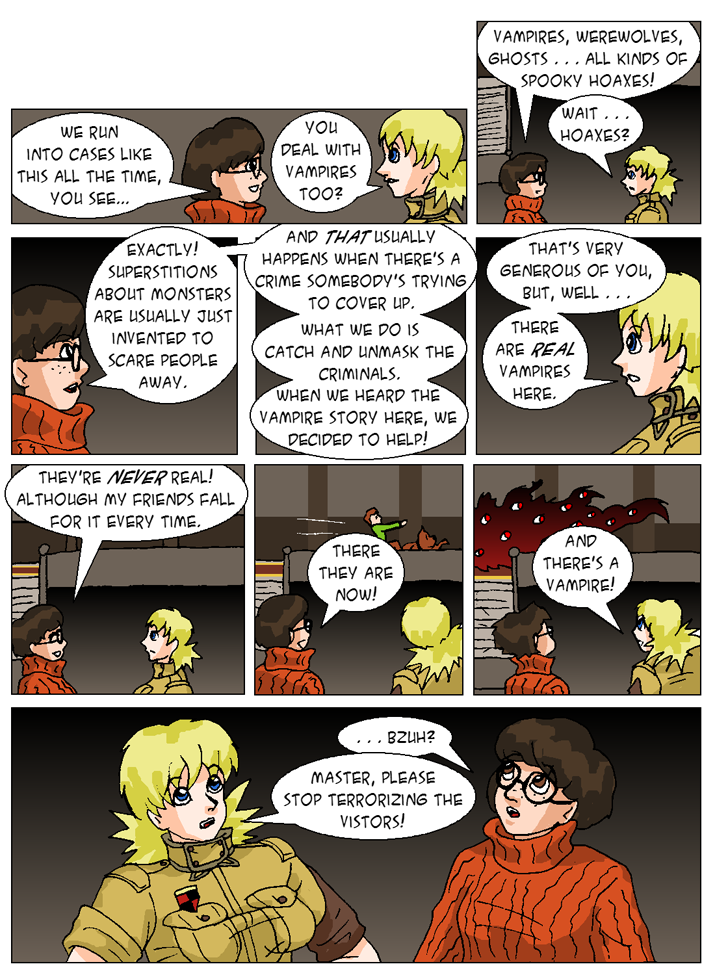 Velma: We run into cases like this all the time, you see…

Seras: You deal with vampires, too?

Velma: Exactly! Superstitions about monsters are usually just invented to scare people away.

And that usually happens when there’s a crime somebody’s trying to cover up. What we do is catch and unmask the criminals. When we heard the vampire story here, we decided to help!

Seras: That’s very generous of you, but, well…there are real vampires here.

Velma: They’re never real! Although my friends fall for it every time.

There they are now!

Seras: And there’s a vampire!

I think everyone guesses Velma to be gay because…well doesn’t she just remind you so much of that one girl in highschool who turned out gay later and everyone knew it but HER??

And it seems like we had a couple of guys that way too– “gee…I’m not gay”..but then right after college they all come out of the closet.

I have to admit the Hellsing crossover with Scooby doo is too me the most BIZARRE thing ever… though Erin manages to work with it just nicely. Girl, you make the impossible posible.
Seeing the guys trying to solve and unexistant mystery is priceless. I wonder if they will try to take of Alucard mask only to found out is not a mask… that and the fangs not being prostetic 😛

Velma is thought as a lesbian by some people? O.o That’s new to me.
I saw Scooby doo as a child but never apealed much to me, except for the “Scooby doo the pup” one but I guess it was more more easy to me to identify with the humor. And some movie when they went to an island full o zombies that where real this time. The other series I found them a little repetitive.
I HATE the character of Scrappy doo with passion, I found it really annoying.

Alucard is scaring the crap out of Shaggy and Scooby by chasing them around in his “freaky mass of shadow and eyes” form, and Velma’s mind has been at least momentarily blown by something she cannot readily explain. All of my hopes for this storyline have come true.

Though, seeing what I assume is the beginning of the ever classic chase scene, I wonder what song is playing in the background.

Hum….but she does have other certain features that are stereotyped: boyish haircut, blocky figure, comforatable shoes.

It could be also that when you set her in the same picture frame as Daphnie, her more “butch” attributes are more obvious. Unlike other shows of the same time frame and production company –Josie and the Pussy Cats, Archie etc. Velma is nothing like the other female characters. She doesn’t have that Barbie doll figure, lipstick & mascara face or perfect hair.

I think it is easy for folks to assume she is a lesbian simply because she isn’t like any other female character of the time.

That’s actually a very good point. Velma doesn’t seem like a stereotype from our point of view, but in the seventies she was really out there as far as cartoon females go.

Here’s what velmadinkley.com had to say about her character development:

The first concept for Velma was as a complement to Shaggy. Taken from the sixties, she would also be a hippy type character who was an art student. The problem occurred when they then tried to create Daphne. Daphne would have to be the female equivalent of Freddy. Although nowadays, this would be very acceptable, it wasn’t in the 1960’s ! Back then, the concept that a girl could be both beautiful and smart was considered even further out then a talking dog! (It was a male dominated society.) OK, Take Two! One girl, Velma, would be the brains, the other would be the beauty! The motivation may have been all wet, but the result was good.

I mean, I adore Velma the way she is, but the fact that they felt they couldn’t have a smart, gorgeous character . . . explains a lot about ’70s television, come to think of it. (The show debuted in 1969.)

I’d like to say that shows how far we’ve come as a society yet there’s still little in actual American cartoons to contradict that. Any smart and beautiful female characters in cartoons(american) out there? *ponders* There where a lot more in the 90s than now. I really miss 90s television.

I’m gonna show my age here :::sigh::: I too loved the 1990’s— I was big into comic books at the time and there was that big “Fem Hero” fad for a few years– Lady Death, Shi, Dawn, Electra etc. and they were all smart AND beautiful. I dont know where it went either. I miss it too.

I think though what I miss more is having a main character who is smart, intelligent, strong AND not so beautiful– a little on the plump side, looks like average girl. Some great ones have been started, but they never go far. Let’s face it– you will never see an X-man with 20 extra pounds etc. And vampires? I have never seen a plump vampire character except for some “Ensign Disposable” ones in the Charlene Harris novels. I think Anne Rice has us all trained to believe that vampires pick each other for thier damned good looks, not just thier spiritual resolve to last.

Let’s face facts…Alucard even picked a hottie. What if Seras had been 35 lbs. overweight and had pimples? He likely would have shot right though her, kicked her corpse to the side and went about his merry way. All in a day’s work.

On the second note: I so love the Alucard chasing Scooby & Shag! That had me giggling all morning.

Didn’t the same happened to Integral when the first anime was getting popular? Everybody took for granted that Integral was manly because she looked diferent to the girly stereotipe in anime.

Well, everyone thought Integra was a man because she looks exactly like the bishounen stereotype.

…my point here, if I have a point, is that androgyny is sexy. =3

Hear Hear!!! The first time I realized Integra was a woman, I had immediate flashbacks to Annie Lenox of Eurythmics in that fine @ss black suit and short haircut in “Sweet Dreams” video. (once again…showing my age) I guess every decade has it’s magnificently suited heart/pant throb.