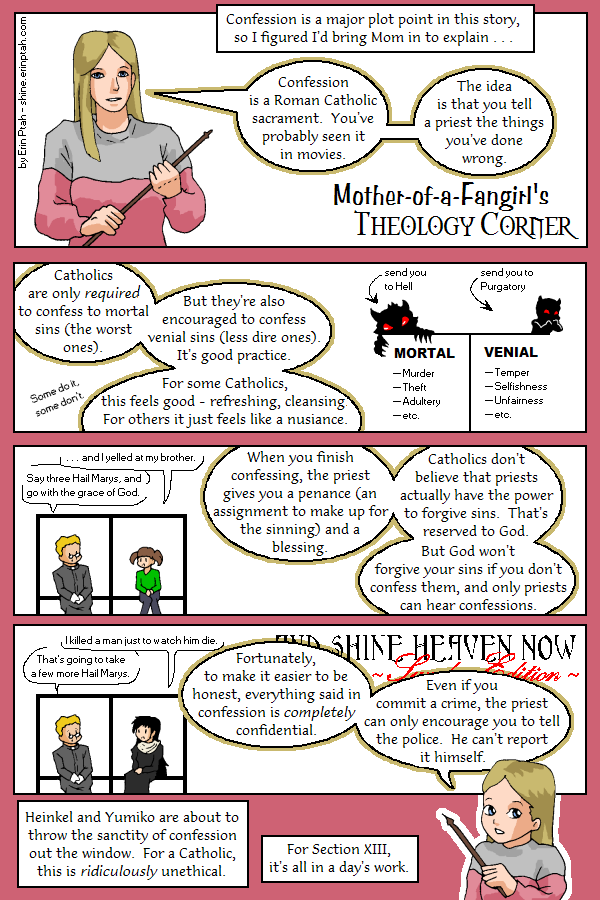 Confession is a major plot point in the story, so I figured I’d bring Mom in to explain…

Mom: Confession is a Roman Catholic sacrament. You’ve probably seen it in movies. The idea is that you tell a priest the things you’ve done wrong.

Catholics are only required to confess to mortal sins (the worst ones). But they’re also encouraged to confess venial sins (less dire ones). It’s good practice. For some Catholics, this feels good — refreshing, cleansing. For others it just feels like a nuisance. [Some do it, some don’t.]

Yumi: …and then I yelled at my brother
Alex: Say three Hail Marys, and go with the grace of God.

When you finish confessing, the priest gives you a penance (an assignment to make up for the sinning) and a blessing. Catholics don’t believe that priests actually have the power to forgive sins. That’s reserved to God. But God won’t forgive your sins if you don’t confess them, and only priests can hear confessions.

Yumie: I killed a man just to watch him die.
Alex: That’s going to take a few more Hail Marys.

Fortunately, to make it easier to be honest, everything said in confession is completely confidential. Even if you commit a crime, the priest can only encourage you to tell the police. He can’t report it himself.

Heinkel and Yumiko are about to throw the sanctity of confession out the window. For a Catholic, this is ridiculously unethical. For Section XIII, it’s all in a day’s work.

Is it just me? I thought Timothy’s current outfit sort of resembles the Valentine Brothers’ jumpsuit thing. It’s a better color though.

it is in deed a Japanese Male School uniform, i have worn that kind of a ‘Monkey suit’ my self while i was there.

i dont remember much of the Catholic believe my self, i never could care much about it, but it does sound right from what i vagely remember.

a nice Catholic joke for Hellsing:

Soldier: “boss, we got Alexander Anderson walking in the distance…”
Pip: “are you Positive?”
Soldier: “As Positive as a Catholic Priest on drugs.”

He could get mistaken for Mamiya, though. That’d be interesting… (Mikage is my third favorite male lead in Utena, right behind Akio and Ruka.)

So…Heinkel and Yumiko are going to pull a Jack McCoy? Only with less lawyer-speak and more violence? Neat.

Father, I have sinned. I have killed, stolen, commtted adultery, coveted my neighbour and killed some more. Oh, and I have been uncharitable.

Haha, names may be similar, but Yumi and Yumie are complete opposites. Seeing that firsthand makes it even better. :3 BUT I LOL’D AT YUMIE’S CONFESSION

Father: Hell young woman, tell me your sins
Yumiko: I let Yumie out again, also… I wanted a raise.
Father: and you Yumie
Yumie: I killed 14 men… and I think that was only at the last mision, want me to say how did I killed them all?
Father: That won’t be necessary *hands her a rosary and an abbacus*
Yumie: Why the abbacus?
Father: you will need it to keep count of the all hail mary’s as the rosary won’t be enough, don’t forget that today is sunday so you will need to pray the “glorious misteries” (http://en.wikipedia.org/wiki/Rosary), you may pause if you need to go to the bathroom between prayers.
Yumie: O.o