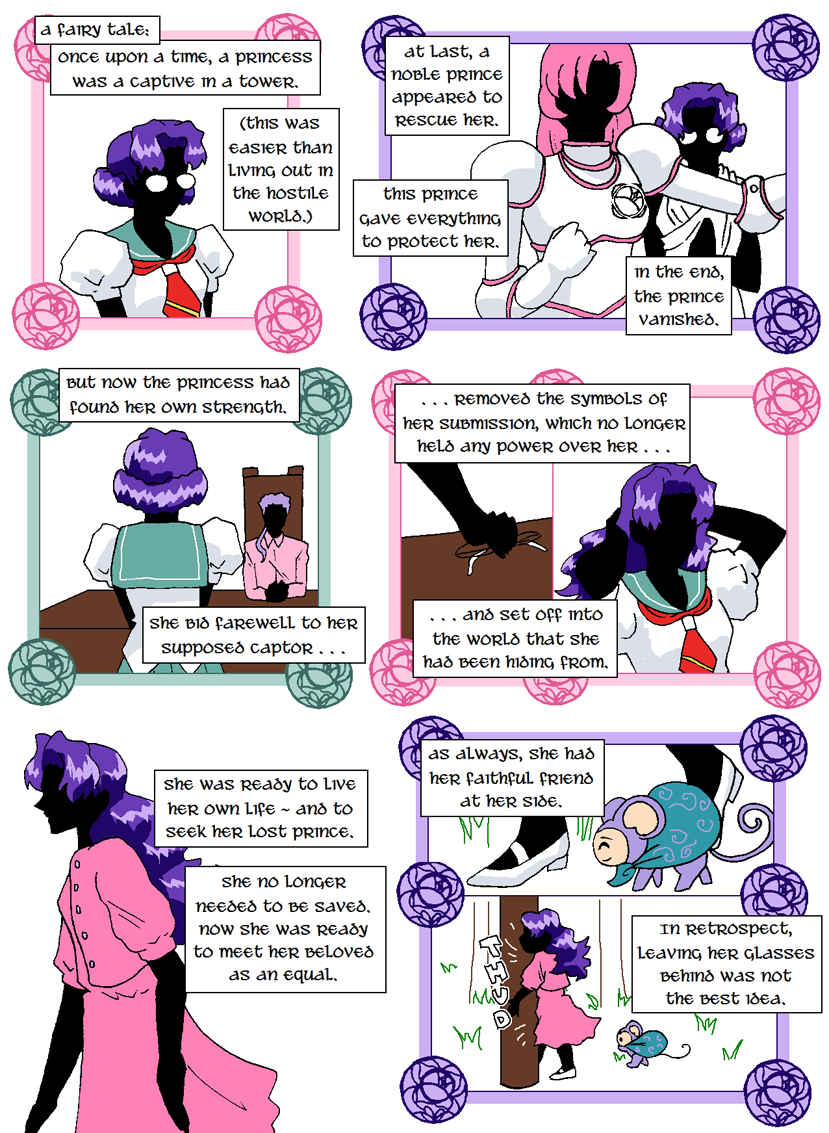 So…if I wanted to get into Utena, would I go for the manga or the anime first?

I would say the manga. It’s five volumes, which makes it easier to get ahold of than the multi-arc anime; and it’ll give you a full version of the story with fewer digressions or filler, so it’s easier to digest.

That isn’t to say you should avoid the anime – or that you can’t go for the anime first if it’s more convenient (say, if you have a friend who will lend you the DVDs). The digressions and filler aren’t a bad thing. But the manga is a good place to start if you just want to get a sense of the story.

I will, however, say that you shouldn’t start with the movie. It’s gorgeous, but if you don’t know the series it makes no sense at all, and may scare you off of Utena forever. (Then again, it may not. I started with the movie. But it was the manga and the anime, borrowed simultaneously from friends, that actually got me into the series.)

I think I’ll start with the anime, but my main reason for doing so makes me feel kind of guilty. I currently lack large amounts of money (and I need to pay my best friend back £25 anyway), and odds are high the episodes will be on the internet for free.

(For the record, I have to agree with the mighty Xuanwu that Cowboy Bebop is the best anime series, but sadly it can be beaten by ANY Hayao Miyazaki film.)

And I think Anthy running into a pole/tree is adorably hilarious. XD

the last part makes me giggle ^.^

It’s funny you mention Evangelion, as the two share many similarities. Both are essentially attempts to push the boundaries of their respective genres (mecha and shoujo) from escapist to something that speaks from a more classical perspective. And for the most part, both represent successes in that attempt. Together they are arguably two of the most intellectually brilliant shows Japan has created so far.

The Utena anime is arguably the better of the two in its use of symbolism – I’ve generally ranked it as the second greatest anime series of all time. While it does suffer from the occasional excess (the Nanami episodes), even that can be seen as attempts to use absurdity and surrealism to jar the reader. This is similar to how some philosophers use paradoxes to shake the reader’s focus. Utena is comparable in many ways to “The Prisoner” (regarded as the best TV show ever made) which also explored many of the classical themes using a combination of visual and story telling cues.

Evangelion is slightly less successful, for while it abandons many of the common mecha tropes (it doesn’t have a hot shot pilot, there’s a unifying philosophy and metaphysics, etc.) to deconstruct the genre, it can never seem to maintain narrative cohesion under the weight of its own meaning. The original episodes 25-26 and the End of Evangelion are examples of this. In this respect, RahXephon was actually better able to present itself in animated form, even though Evangelion possessed the richer message. (It remains to be seen if the last movie of Rebuild of Evangelion, “Evangelion: Final,” can buck this trend.)

What’s awe inspiring to a writer like myself is that Utena and Evangelion are in every way as meaningful as they appear. The level of detail that went into their plotting and development must have been very challenging. Digging into the concepts that underlie their presentations (Evangelion explicitly states its theme of relating self and perspective, Utena is more coy) is a richly rewarding experience that everyone should at least attempt. I only wish Utena was as popularly recognized as Evangelion, then it might be as fully analyzed.

I usually put Cowboy Bebop as #1. While Utena is the best in terms of intellectual use of the medium, Bebop has the tightest overall production. Good animation quality, easily one the best soundtracks for a show, good writing with a variety of styles, and so on. It also tops Utena for pure viewing pleasure – man cannot live on heavy symbolic art alone.

Cowboy Bebop is pretty sweet, but FMA and Death Note for the win.

I’m not sure if either has the staying power of Cowboy Bebop, I mean it’s almost ten years old and has aged very well compared to other anime of the late 90s. I think the Death Note manga will stick around but the animation quality of the anime might bring it down a bit.

I couldn’t see anything wrong with the animation quality. Mikami’s blood fountain in the final episode was a bit silly, but apart from that it was fine.

Your Honor, I have here evidence that FMA and Death Note may be good to a point, but they can be easily beaten by a series that ran just last year!

Admittedly, my top ten list (which I compiled for the school newspaper – it was published in 2 parts as my final pair of articles for them) was written before FMA had finished and before the Death Note anime even existed. I will say that the Death Note manga is far superior, though it probably gets into the lower 5.

If I recall right, the top 10 I put together was:

I put Sailor Moon in there due to its impact on the magical girl genre. Excel Saga was my favorite comedy of the time, beating out FLCL thanks to Nabeshin. Transformers went in there because it’s really awesome. GE 999 is one of the best classics of anime; most of Leiji Matsumoto’s stuff is pretty cool.

These days, I’d probably replace EVA with RahXephon, since I like the latter more. FMA and Haruhi would also earn places there, with Sayonara Zetsubou Sensei probably taking Excel Saga’s place.

So we’re getting into “Top Ten” lists, eh? Well then, I’ll offer my choices:

NEWS FLASH – THERE IS A TIE FOR FIRST PLACE! THE WINNERS ARE

Okay, what happened with the voting…

I was wondering when somebody was going to mention Hellsing. Given that you are (I hope) all fans…

The comic’s about Hellsing?! I thought it was a precursor of Vampire Hunter D!!

Good LOWRD. I shouldn’t even be allowed to call myself an anime fan considering that I just barely watch anymore than mainstream stuff. I don’t think I could make half a top ten list. I don’t even think I’ve ever watched any of the anime used in any of the Shine-crossovers so far.

Oh, I like it. It’s just there are other series I like more. Utena is one of them; Read or Die is another.