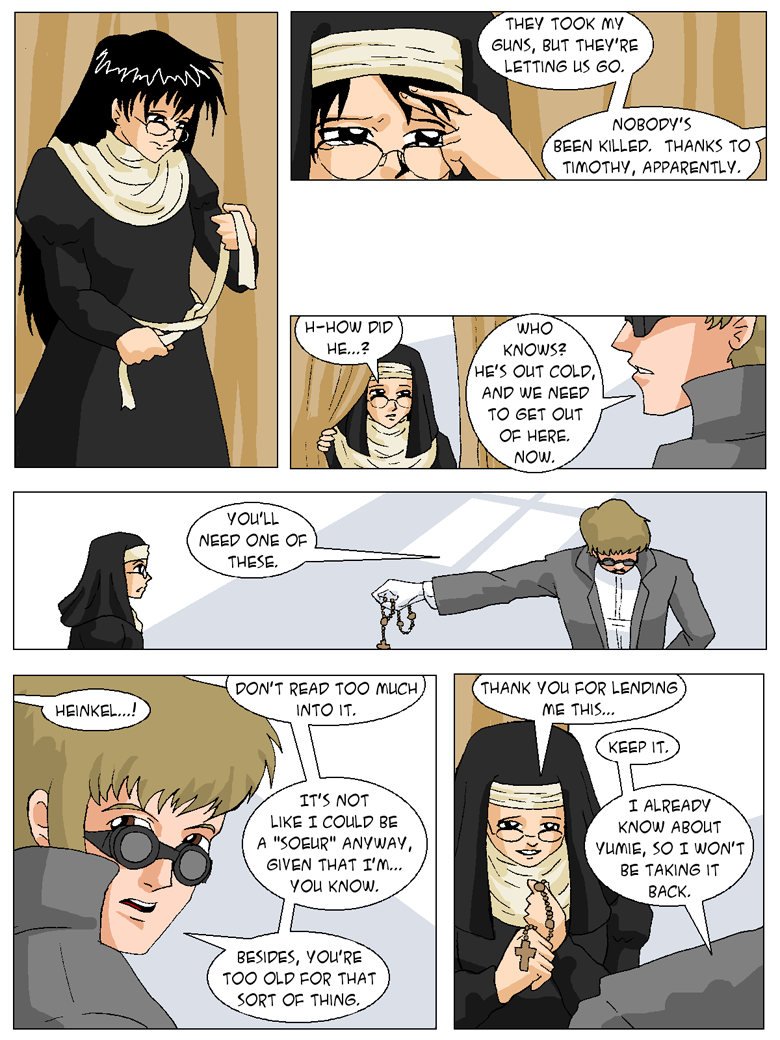 Heinkel: They took my guns, but they’re letting us go. Nobody’s been killed. Thanks to Timothy, apparently.

Heinkel: Who knows? He’s out cold, and we need to get out of here. Now.

You’ll need one of these.

Heinkel: Don’t read too much into it. It’s not like I could be a “soeur” anyway, given that I’m…you know. Besides, you’re too old for that sort of thing.

Yumiko: Thank you for lending me this…

Heinkel: Keep it. I already know about Yumie, so I won’t be taking it back.

Boy… that was BIG of Heinkel… offering his/her rosery.

Heh. Yumiko lost one and gained another. Nifty.

Damn this is like on Saturday Night Live trying to figure out if Pat is a guy or gal? Still it’s was nice and rather nice of the Japanese Government to let them off so easily.

a very big gesture. Such a touching scene^_^

I have no idea why, but Heinkel looks kinda hot in the 4th panel, offering the rosary. Maybe it’s just me… :shucks:

It’s nice that Yumiko’s partner knows just what’ll help heal her. 😀 I wonder if that’s perhaps the rosary Heinkel got at a younger age… 😉

…Darn it Erin! This strip just makes me wonder about Shine-Heinkel’s gender even more!

It was an adorable scene though.

Like when a girl asks a question it sounds different then from when I guy says it.

ex:My shop class
“Mr Daminato I need some help over here” this is me

“Mr D! What do I do?”
My observations are guys and girls talk differently, they have different choices of words and use different expressions for different situations. I must make a study on this. Why didn’t I think about this for my datamanagement project.It would have been awesome
Try to guess which is which. I have a cupcake for who wins*

* the cupcake is imaginary with dream flavoured sprinkles

I make a conscious effort to make Heinkel sound androgynous, so this is good to hear 😀

Hmm… looking over the strip Heinkel says “He’s out cold, and we need to get out of here. Now.” This causes me to wonder, does that mean that they are planning on leaving Timothy behind, or that they’re going to try to sneak him through the airport unconscious? And if they are leaving him behind, are they wanting him to find his own way back, or are they writing him off as a loss?

Leaving Tim behind would be hilarious. He could get hired as a TA and have Negima-style adventures with Anthy. She’d give him the power to make girls’ panties disappear when he sneezes! 😆

Would they make the contract with a kiss, or by spending some more naked time together?

I fail to see how those are mutually exclusive options. 😎