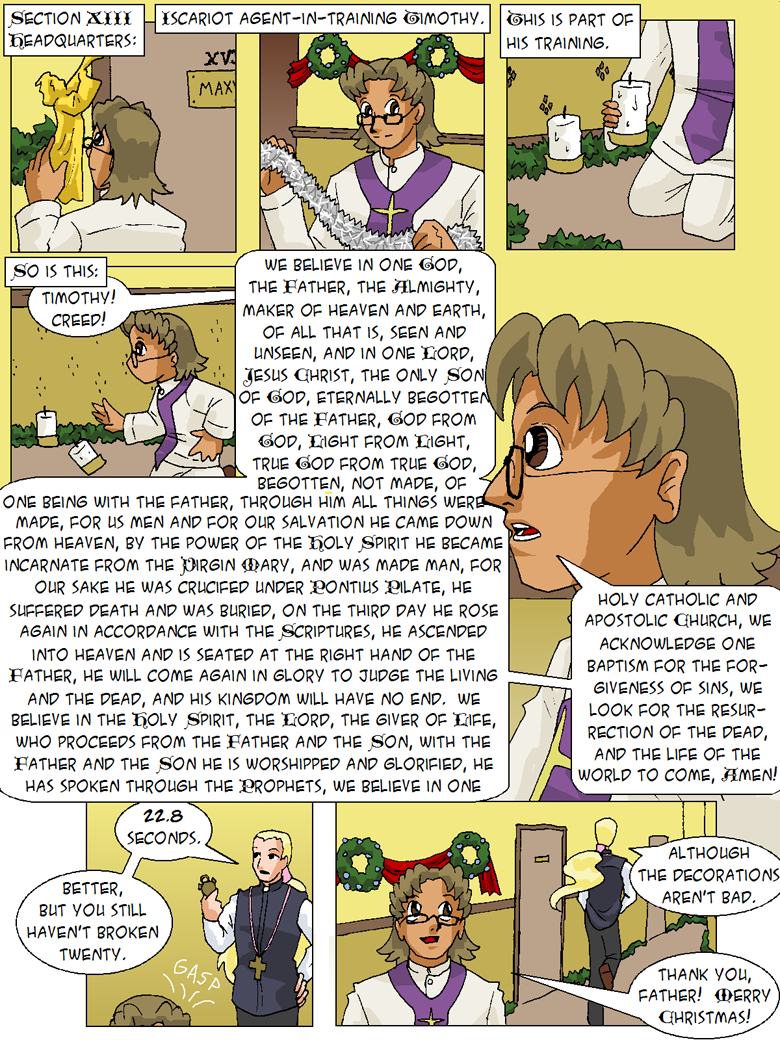 Timothy’s recitation is of the Nicene Creed, the official Catholic variation.

Section XIII headquarters: Iscariot agent-in-training Timothy. This is part of his training.

Timothy: I believe in one God, the Father almighty, maker of heaven and earth, of all things visible and invisible. I believe in one Lord Jesus Christ, the Only Begotten Son of God, born of the Father before all ages. God from God, Light from Light, true God from true God, begotten, not made, consubstantial with the Father; through him all things were made. For us men and for our salvation he came down from heaven, and by the Holy Spirit was incarnate of the Virgin Mary, and became man. For our sake he was crucified under Pontius Pilate, he suffered death and was buried, and rose again on the third day in accordance with the Scriptures. He ascended into heaven and is seated at the right hand of the Father. He will come again in glory to judge the living and the dead and his kingdom will have no end. I believe in the Holy Spirit, the Lord, the giver of life, who proceeds from the Father and the Son, who with the Father and the Son is adored and glorified, who has spoken through the prophets. I believe in one, holy, catholic and apostolic Church. I confess one Baptism for the forgiveness of sins and I look forward to the resurrection of the dead and the life of the world to come. Amen.

Although the decorations aren’t bad.

GAHHH ERIN!! You did this on purpose didn’t you??? Do you know how many of us Catholics/ex-Catholics are going to be timing ourselves now?? Surely I won’t be the only dumb sod out there trying it….

I came in at under 2 minutes. I got stuck.

Now I have this terrible urge to scrub my mouth out with Dawn dish detergent and run around the house naked three times backwards to get rid of the memories of mass 3 times a week in scratchy blue and black plaid uniforms. ::::::shivers::::::::

Oh, you poor thing. Sorry for reviving your childhood trauma!

…there should totally be a contest. Or a reality show. “Iscariot’s Next Top Soldier.” Round one: recite the Nicene Creed. Slowest person gets eliminated. Round two: how many saints you can name…

Round Three– how long you can stay on your knees on a stone floor while holding a 200 pound box.

Round five– running away from pervy priests.

Round six– locked in a confessional as it fills up with holy water.

Oh Erin…this could go on forever!

If my readers had a higher tolerance for all-out religious geekery, I’d make that a storyline XD

Let’s see if I can remember the Apostle’s Creed from the Methodist church….

I believe in God, the Father, maker of Heaven and Earth, and in Jesus Christ, his only son, our Lord, who was conceived by the Holy Spirit, born of the Virgin Mary, suffered under Pontious Pilot, was crucified, died, and was buried. On the third day He arose from the dead. I believe in the Holy Catholic Chuch, the *mumble* of saints, the forgiveness of sins, the resurrection of the body, and the life ever after.

*looks it up* Oops. I forgot “He ascended into heaven, and sits at the right hand of God the Father Almighty. From thence he shall come to judge the quick and the dead. I believe in the Holy Spirit.” And it’s communion of saints. 😛

But I am no longer Methodist, or even Christian for that matter, so it’s no biggie.

What I never understood was why they left in “I believe in the Holy Catholic Church.” I thought the Methodist church was protestant.

“Catholic” means “whole”. Protestant versions of the creed (including the one I learned, Presbyterian) use it to refer to the entire Church, not the Pope-led subset or any of the Protestant sects.

While I can’t say that I’ve recited the Nicene Creed in under twenty seconds (my church doesn’t believe in it) I do have some practice with that kind of thing. Back in my days as a missionary we would be expected to memorize a few things written by the leaders of the church about missionary work, and one of the methods my trainer used was suddenly asking me to recite one of them while we were walking down the street. I also used that method in helping some of my later companions who were trying to get them memorized. Once you showed your zone leader that you could recite all of them and teach all of the lessons competently you were given a mission lapel pin as a reward. I wish I could say I could still do that, but it’s been a couple of years and with my lousy memory I only have one of the things somewhat remembered. I can’t even remember what most of them were 😳

Our mission president also came up with a hypothetical situation as a training exercise where some wise guy would say he would give us exactly one minute of his time, and we had to be able to briefly teach the first lesson while hitting on all of the points in that amount of time. He also came up with a 30 second elevator exercise, but not many people were able to pull that one off.

Timothy’s reciting something of that length in almost 20 seconds is dang impressive, no matter how you look at it.

The thought of being trapped in an elevator with a missionary doing a 30 second religious recitation has totally capped Erin’s ability to cause Sister Danielle ruler flashbacks in the absesses of my mind.

Aw… we really don’t get to see anyone in a tutu? Weehhhhh.

When we used to recite the Nicene Creed in mass (en masse, lolz), there was definetly a sort of “1984” feel to it- like everyone was reciting it robotically, because it was so ingrained in their brains. In fact, I remember a lot of catholic rituals being like that. That’s not to say they aren’t beautiful in themselves, but that sort of “We Hear and Obey” feeling that it gave me contributed to my ultimate estrangement from the Catholic church. I still go to church with my family when I can be with them- that’s the only time it really feels right to me.

I haven’t timed myself yet, but I’ll bet I could get a good time. Not 20 seconds… but wutev.