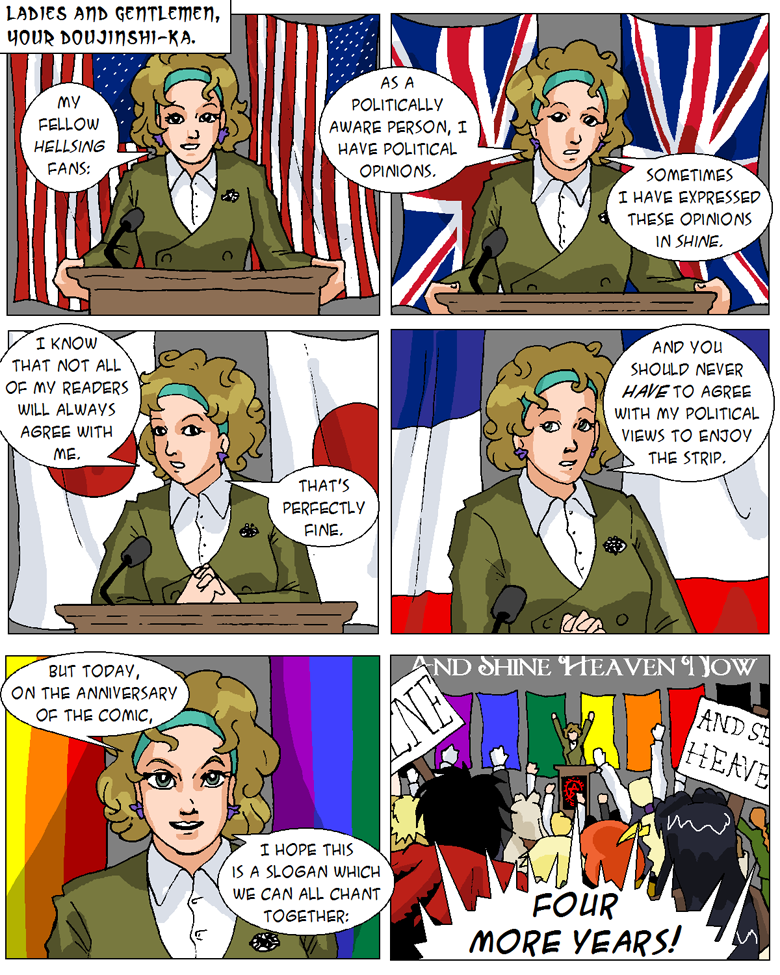 Note from The Future: except, of course, in the sense where people think “I don’t respect the existence of science or the basic humanity of people who are different from me” is “just a political view.”

Ladies and gentlemen, your doujinshi-ka.

As a politically aware person, I have political opinions. Sometimes I have expressed those opinions in Shine.

I know that not all of my readers will always agree with me. That’s perfectly fine.

And you should never have to agree with my political views to enjoy the strip.

But today, on the anniversary of the comic, I hope this is a slogan which we can all chant together:

The update queue is stalled yet again, so you don’t get today’s strip, which happens to be the HAPPY FOURTH ANNIVERSARY SHINE!!!! strip.

Maybe we should have a party thread or something.

As to this new storyline, interesting. As long as the girls don’t make the mistake of trying to suck on Integra’s neck, they should probably be all right.

I would said 6 more years!!! as the presidential period Mexico are of six… but we have no reelections* so I guess better stick with the four XD

*Last president who succeded was murdered the same day of the celebration party… by a cartonist by a catholic fanatic(he was an agent of Iscariot sended to stop the complete separation of church and state!!!… in my delusions…)

Wow, four years! I wish I could keep up something that long. I also wish I’d been in this fandom for more than just one year. T.T

That was a very good Shine Anniversary strip.

IS THAT MAJOR I SEE AT THE HEAD OF THE CROWD?

I love how the flags kept changing every panel. That, my friend, was HILARIOUS.

Seras, Alucard, Integra, Shrodinger, the Major (?), Madeline, Maxwell, Yomiko Readman, and Pip. There are a few others, but I cannot identify them from just an arm.

Also, if you look just above Yomiko’s head, Madeline’s ribbon and Maxwell’s hair seem to form an eagle’s head. I thought it was the bird from the Colbert Report for a moment.

And congratulations on running a strip this long without any storylines that truly sucked and without missing too many updates. *Looks at several other long-running strips notorious for their unreliability*