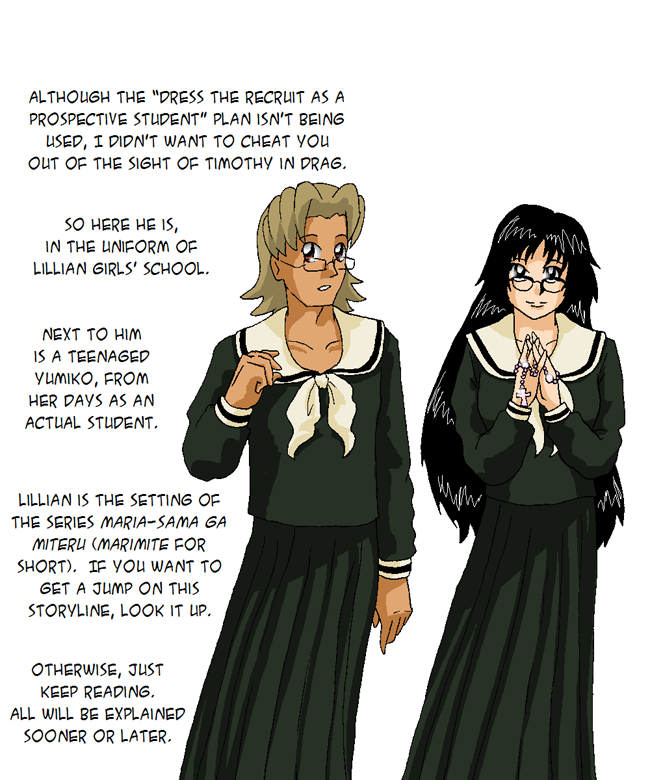 Although the “dress the recruit as a prospective student” plan isn’t being used, I didn’t want to cheat you out of the sight of Timothy in drag. So here he is, in the uniform of Lillian Girls’ School. Next to him is a teenaged Yumiko, from her days as an actual student.

Lillian is the setting of the series Maria-sama ga Miteru (Marimite for short). If you want to get a jump on this storyline, look it up. Otherwise, just keep reading. All will be explained sooner or later.

Looked up Marimite…I can see why a certain Utena character might be infiltrating it. Let me guess: Lillian is another school Akio’s sunk his fingers into (both figuratively and literally)? That would explain where all the roses come from. And it’d make sense for him to support a school that converts Japanese children to Christianity, being the Devil and all.

Heinkel, of course, would be Yumie’s Bride, with Yumiko as Heinkel’s if they wanted to go the other way. (Hilarious scene: Akio pulls out his sword and gives one of his flowery speeches. Heinkel shoots him in the knee. Win!)

I’m fairly sure Akio won’t be appearing, though (he would make this story jump several levels of complication). At least, I hope he doesn’t, since I have many plot ideas involving him and a certain Protestant Knight. 🙂

Never bring a knife to a gunfight, eh?

Of course, Akio has embarrassing stories about when Dracula was his student at the Scholomance while he was alive. That has some real comedy potential, I think.

Oh, god…that also has the potential to also be something as trippy and slashtastic as Utena, but unredeemed by Juri. Pack of guys in the mountains studying magic…I think a certain type of fangirl would jump on that story like cats on mice, but I’ll be staying far from it.

Yumiko in that dress looks so cute.

…Timothy in the Lillian uniform is AWESOMELYFITTINGWHYDOESHELOOKSONORMALINIT?!

I did propose that Akio should be the one who gave Vlad the powers to be Dracula, but Erin’s said Akio can’t be Satan due to metaphysics already in place. So he’s just a powerful magical figure.

Interesting idea. Change that to pack of guys studying alchemy to get to Thule and you’ve got yourself the workings of an even bigger crossover.

Juri is awesome. Her and Ruka definitely have some parallels to Integra and Alucard: strong women who won’t acknowledge their love for a (Integra due to duty, Juri because she can’t handle Ruka’s impending death), both of them urged by their partners to change into something more (Alucard with his “fig leaves,” Ruka with his fencing training), and both of them have the potential for transcending normal human bounds (Integra as a leader who defeats Millennium, Juri as a duelist who was able to outperform Utena and Dios). There should be a way to get Juri and Ruka into Shine…

I agree most whole heartedly Yumiko looks downright delicious in that attire, question though is did Yumi exist back when she was that young?

Cant wait to see that 😀

Hmm… another lesson please?
i dont quite understand what that meant…
or rather, i know what the words mean individualy, but not what it is suposed to mean in this combination.

“Plot point” can also mean “plot element” or “a subject that will be dealt with over the course of the plot.” In other words, Erin’s saying we’ll find out Yumie’s origins in this arc.

If Yumie created Yumiko, it’d mean something convinced her she needed to be more subdued. If Yumiko created Yumie, it means something made her feel the need to be more fierce. You get vastly different origin stories depending on “witch” it is. (Ha! Pun! And a guess on how Erin’s going to work this out.)

Thanks for the explaining Xuanwu.

i happen to know about such personality swings. but finding the right english words is a problem, and i cant find the right translations. (dumb Online translators.)

but i tried as best i can:

often a split personality can come into being thru special situations, mostly being serious trauma to the body, mind/sole.

for instance, Yumiko might have been a kind an loving person at first, but if something horible where to happen, a split personaly could come into existance that comes out when she is treatened, sort of you’re alternite self inside you’re body that acts as you’re gardian angle.

As far as i know these split personality’s can come out at anytime with out warning when this person feels treatened of is in destress. but also they can come out by just snapping you’re fingers or in Yumiko’s case taking off her glasses.

this affect sometimes can be gained by hypnotism two.
or that they ‘agreed’ on what the thing was that chances personality’s.

as far as i have heard about this accurance, people with this condition seem to be able to comunicate directly with there alternite self. at least so i have been told by a family member of mine who has something similar.

i cant say for certain this every thing that i just said is correct, but its all i know. and i dont even know the word to decribe this Syndrome, or i would have found the right words in Wiki :p

I due have a few suggestion on how her alternite self came into being, but i have to get back to the grind…