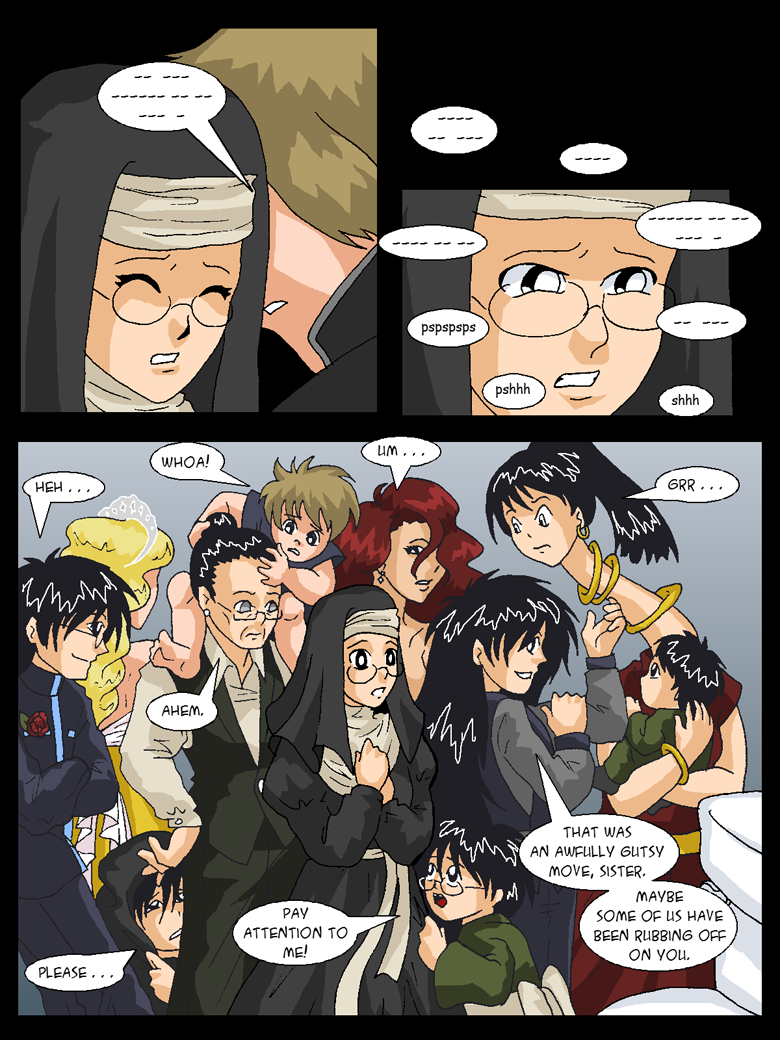 Yumie: That was an awfully gutsy move, sister. Maybe some of us have been rubbing off on you.

Is it just me or is one a female walter?

I’m not really sure. But I still hate to think that Yumie is the original personality!

Forget that, is the one on the far left a Rose Duelist?

And now the question becomes: who’s the original personality?

Just to be contrary, I’m going for the blonde in the back, namely because she’s the only one we can’t see her face.

Well, my guess as to who’s the original is the one in the lower-left corner. My reason for this is having this kind of condition, to this extent, would almost certainly make for a rough life, and she’s the only one who looks like she’s had one. The reality of All-together Yumi’s pre-Iscariot life, so to speak. Of course you could also argue that the baby is the original as that one’s about as basic as you can get 😉 😛 Well, either way she might want to get used to either diapers or embarrassment if there’s any danger of Baby Yumi taking over occasionally. Assuming she lives that long. :shifty:

Anyway, let’s see if I can identify these (and name them for the heck of it). Um… I think the one leaning on the far left is an Inner Cool Guy “Archer”. The blond woman would be a Pretty Princess personality “Yumi-hime”, and below her is Original Yumi. To their right is what I think might be Inner Child (Male) “Yuu-chan” on top of Butler “Yumi-san” (or possibly Harsh School Marm). I think the redhead might be an Amorous Woman personality “Lily”. Below her is of course Yumiko, whose clothing is being tugged by Inner Child (Female) “Yumi-chan”. Then we have Yumie. Next to her is Baby Yumi being carried by, uh… Madonna-With-a-Long-Neck Yumi? Eh, I’ll just call her “Madonna” until told otherwise (as with all the other Yumis really). And last (and honestly speaking probably least) of all we have John, who while not a personality gets to make a cameo appearance with them anyway.

Anyway, now that the other personalities have been brought out, can they be suppressed again easily, or would it take some time and effort on Iscariot’s part to do that? And is her problem going to continue to be along the lines of personalities taking turns driving the body so to speak, or is she now faced with a more “voices in my head” kind of problem (or possibly both)? Either way this is going to be rough, and I have to wonder what kind of an effect having Yumiko as the default for so long will have her, regardless of who the original Yumi might be.

Yumie-Hime = Sailor Scout Princess Yumi? (I know someone might point at the baby for the same reason if I say that… But there’s already a Sailor Saturn.)

Far shot but it’s a thought since we’ve seen Pluto before. And I tie that in because looking at them all, it seems like we’ve seen references/flash backs/moments/(story archs) plot lines that each of the personalities would have felt at home in. Or in the case of Yumi-San, someone they would feel comfortable working with, or working in place of. Maybe that’s her Hellsing personality? Her desire to work where she’s not going to be tortured/”worked on”? Madonna is very much a SHINE ENGLAND THEN type.

But, most of all, how does Lily piece in? I’m going nuts here because I really feel like I’ve seen her before.

Oh, wow. This is surprisingly accurate, and I think I’m going to keep half the names XD

(I will point out that the Inner Cool Guy’s name is Yuuki, because that’s going to come up in a few strips. The rest of the identifications will come along later.)

The personality with a long neck is a rokurokubo, while the hiding one is basically a hikkomori.

think John is the best of them all. 😆

Yuuki interests me (not the least because, like most anime males with black hair and glasses, he looks like me). Though the little girl going “Pay attention to me” might be interesting, as well.

I’m kind of surprised she doesn’t have a heretic inside. Unless one of them has that component?