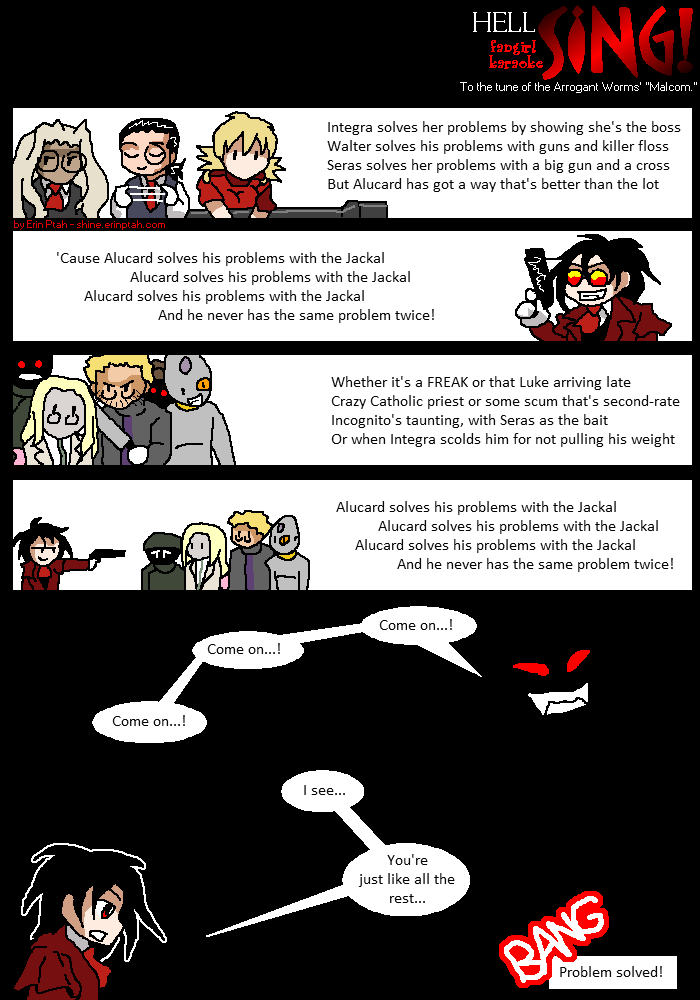 To the tune of the Arrogant Worms’ “Malcom.”

Whether it’s a FREAK or that Luke arriving late
Crazy Catholic priest or some scum that’s second-rate
Incognito’s taunting, with Seras as the bait
Or when Integra scolds him for not pulling his weight

Integra: …so unless you happen to be in charge of a secret organization whose failure would mean the deaths of millions of people. What, police girl?

Never run with scissors or sharp objects. It’s dangerous! You could hurt somebody!

Walter: Brushing your teeth every day is key to good dental health.

And if you want teeth like mine when you’re over sixty, you have to floss, too.

Alucard: “Verb: It’s what you do.” That’s it? That’s my entire script?

Others: Is it an advertisement for something? / No phone number. / No “more information” website. / Is it a campaign to promote exercise? / Or maybe it’s about grammar. 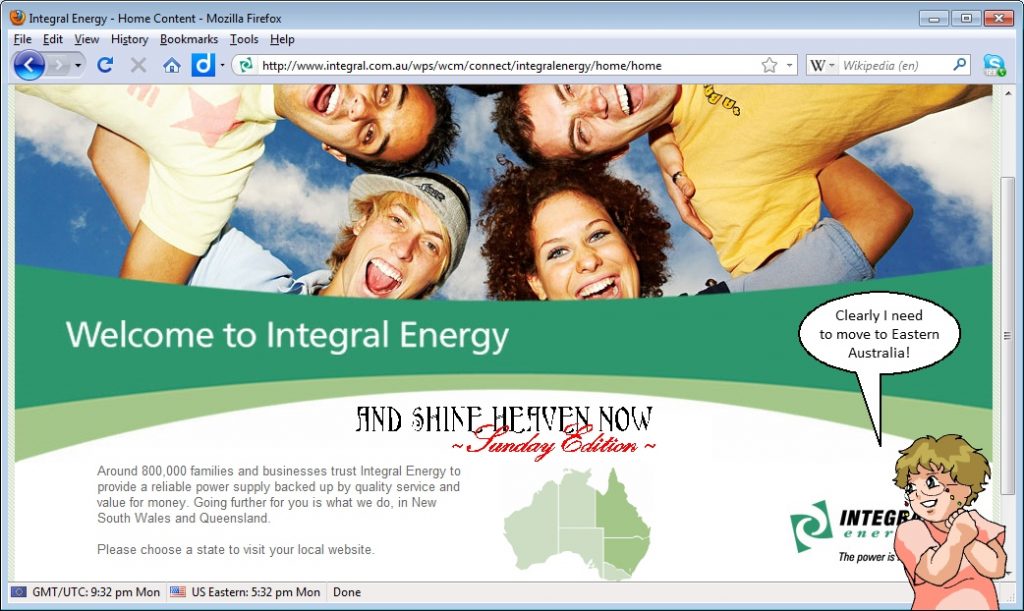 Erin: Clearly I need to move to Eastern Australia! 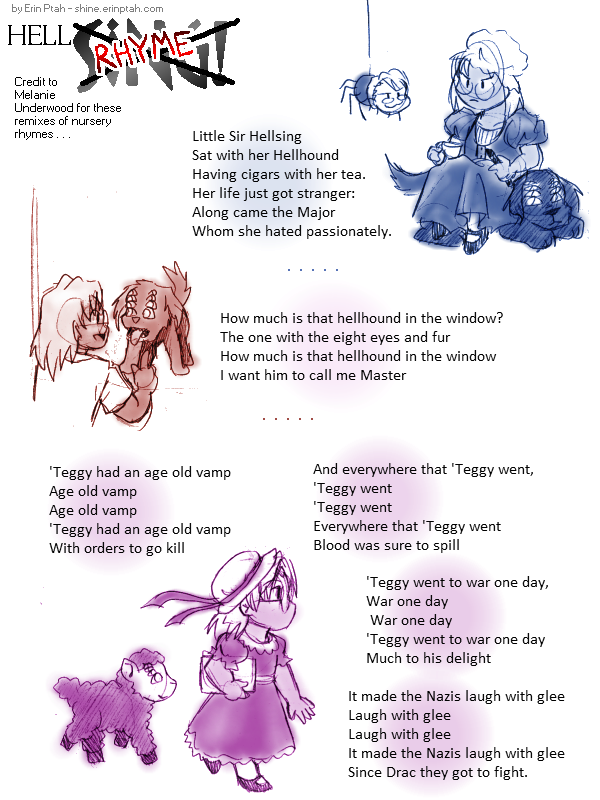 Credit to Melanie Underwood for these remixes of nursery rhymes…

Little Sir Hellsing
Sat with her Hellhound
Having Cigars and Tea
Her life just got stranger
Along came the Major
Whom she hated quite passionately. 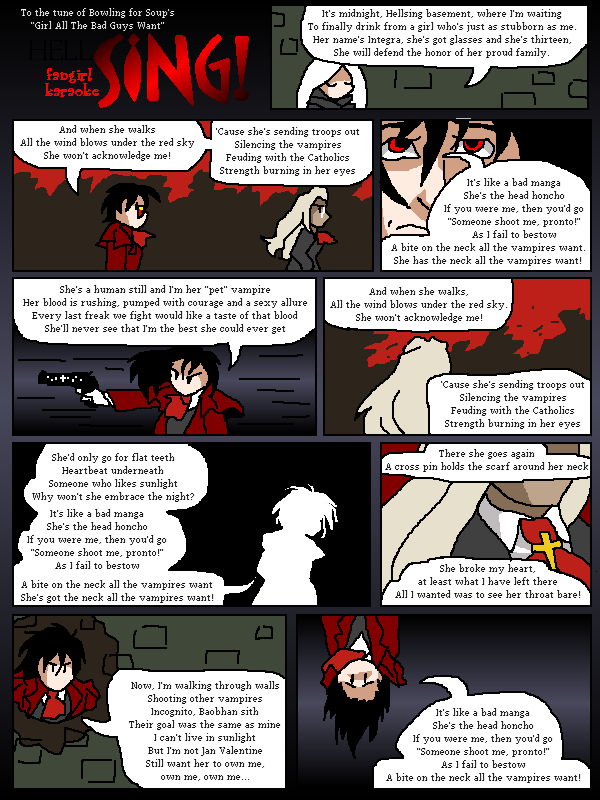 (Alucard)
It’s midnight, Hellsing basement, where I’m waiting
To finally drink from a girl who’s just as stubborn as me
Her name’s Integra, she’s got glasses and she’s thirteen
She will defend the honor of her proud family

And when she walks
All the wind blows under the red sky
She won’t acknowledge me!

She’s a human still and I’m her “pet” vampire
Her blood is rushing, pumped with courage and a sexy allure
Every last freak we fight would like a taste of that blood
She’ll never see that I’m the best she could ever get

And when she walks
All the wind blows under the red sky
She won’t acknowledge me!

She’d only go for flat teeth
Heartbeat underneath
Someone who likes sunlight
Why won’t she embrace the night?

There she goes again
A cross pin holds the scarf around her neck
She broke my heart, at least what I have left there
All I wanted was to see her throat bare!

Now I’m walking through walls
Shooting other vampires
Incognito, Baobhan sith
Their goal was the same as mine
I can’t live in sunlight
But I’m not Jan Valentine
Still want her to own me, own me, own me…

It’s like a bad manga
She’s the head honcho
If you were me then you’d go
“Someone shoot me, pronto!”
As I fail to bestow
A bite on the neck all the vampires want! 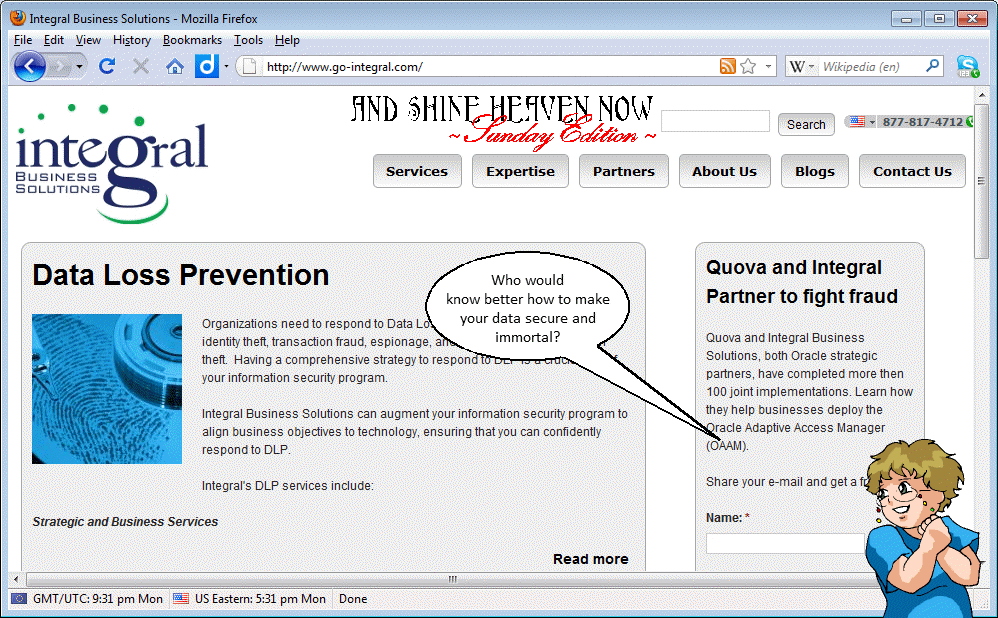 Erin: Who would know better how to make your data secure and immortal? 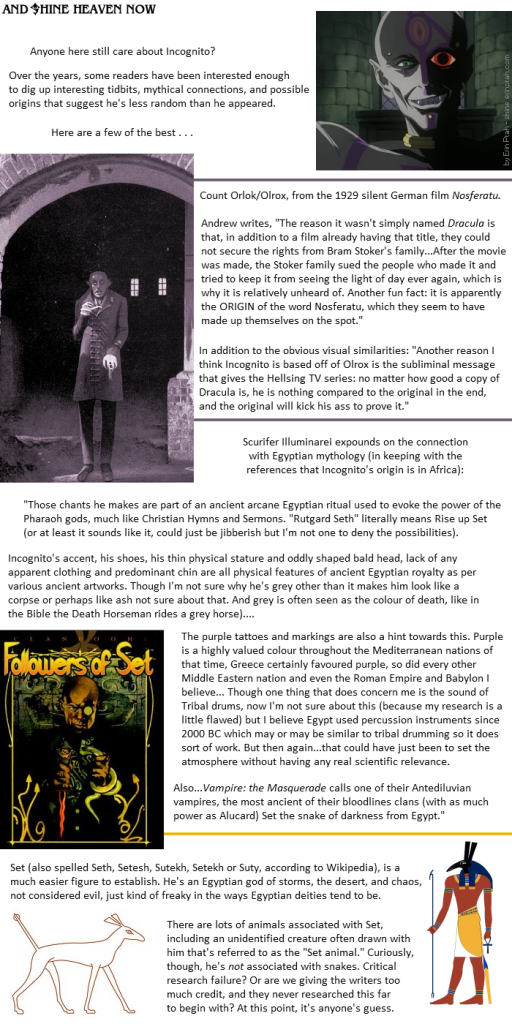