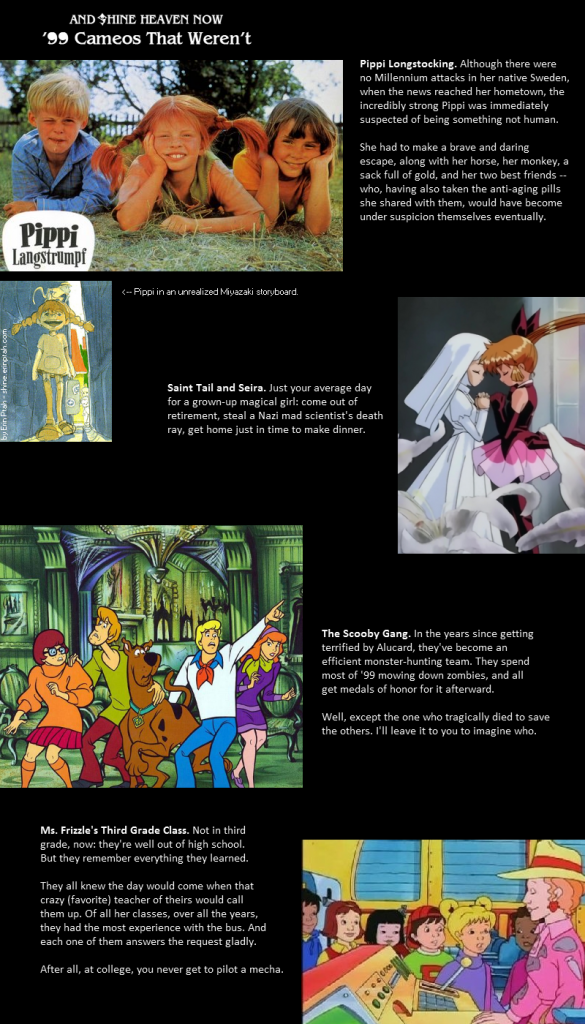 Pippi Longstocking. Although there were no Millennium attacks in her native Sweden, when the news reached her hometown, the incredibly strong Pippi was immediately suspected of being something not human.

She had to make a brave and daring escape, along with her horse, her monkey, her sack full of gold, and her two best friends — who, having also taken the anti-aging pills she shared with them, would have become under suspicion themselves eventually.

[Pippi in an unrealized Miyazaki storyboard.]

Saint Tail and Seira. Just your average day for a grown-up magical girl: come out of retirement, steal a Nazi mad scientist’s death ray, get home just in time to make dinner.

The Scooby Gang. In the years since getting terrified by Alucard, they’ve become an efficient monster-hunting team. They spend most of ’99 mowing down zombies, and all get medals of honor for it afterward.

Well, except the one who tragically died to save the others. I’ll leave it to you to imagine who.

Ms. Frizzle’s Third Grade Class. Not in third grade, now: they’re well out of high school. But they remember everything they learned.

They all knew the day would come when that crazy (favorite) teacher of theirs would call them up. Of all her classes, over all the years, they had the most experience with the bus. And each one of them answers the request gladly.

After all, at college, you never get to pilot a mecha.