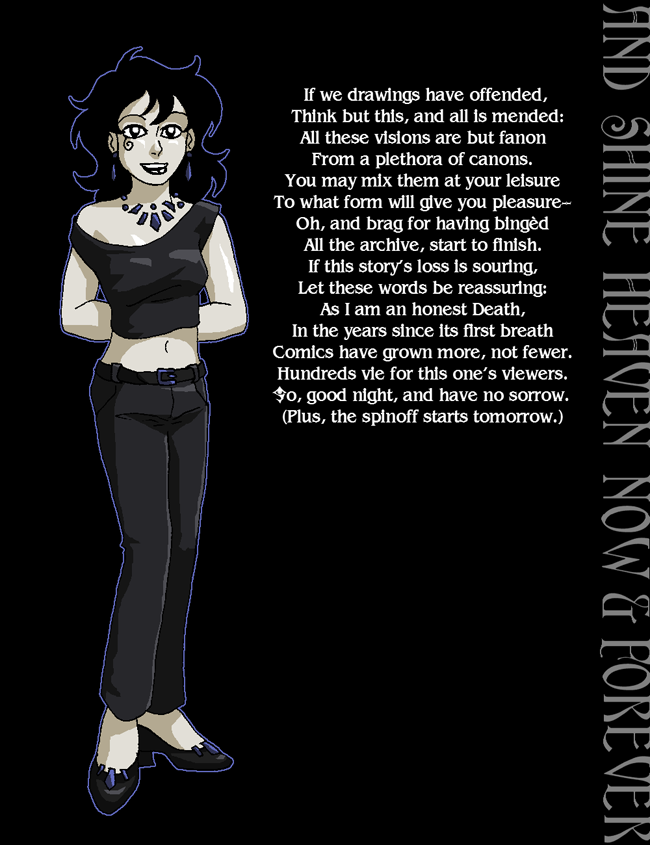 Note from The Future: On the original ComicGenesis site, this was followed by The Eagle of Hermes, interspersed with omake. On this site, EoH has been archived separately, so it’s all bonus material from here on out.

If we drawings have offended,
Think but this, and all is mended:
All these visions are but fanon
From a plethora of canons.
You may mix them at your leisure
To what form will give you pleasure–
Oh, and brag for having bingèd
All the archive, start to finish.
If this story’s loss is souring,
Let these words be reassuring:
As I am an honest Death,
In the years since its first breath
Comics have grown more, not fewer.
Hundreds vie for this one’s viewers.
So, good night, and have no sorrow.
(Plus, the spinoff starts tomorrow.)

(Except for the post-series omake. There’s a bunch of that still to come.)

Integra: Pop quiz, young Mister Penwood. There’s a border dispute with the baobhan sith…New Delhi wants a consultation on what may be an outbreak of werewolves…

…and Washington is posturing with the Brazilian government over whose job it is to handle a rogue dragon. Not our jurisdiction, but likely to become our problem. What do you say to all that?

Integra: Not the phrase I was looking for, but I’ll give you credit anyway.

Integra: I’ve grown since you disappeared, Alucard. Changed. Aged. Do you mind?

Alucard: If I may speak freely, my Countess?

You are more beautiful now than ever.

Integra: Good. Then you’ll be pleased to learn there’s no one left to interrupt us.

Alucard: So is he meant to be hour heir? I don’t know how Britain has changed since I’ve been gone, but I can’t imagine it’ll stand for a dhampir inheriting its elite vampire-hunting organization.

Integra: Not a problem.

The era of family institutions is over, and good riddance. Granted, I’m grooming Shelby Penwood’s grandson to take my place, but only because he’s shown a remarkable aptitude for putting up with me. My son will be a formidable hunter. That will have to be enough.

Alucard: You’re sleeping with my fledgling.

Seras: Well, you did disappear for fifteen years.

Alucard: I was reconstituting my soul from the infinite void of null math! Do I even want to know how D happened?

Seras: You and Bernadette both.

Pip: Are you ever going to tell me how D happened? Because I’m pretty sure it was hot.

Seras: Don’t make me give you a time-out, dear. 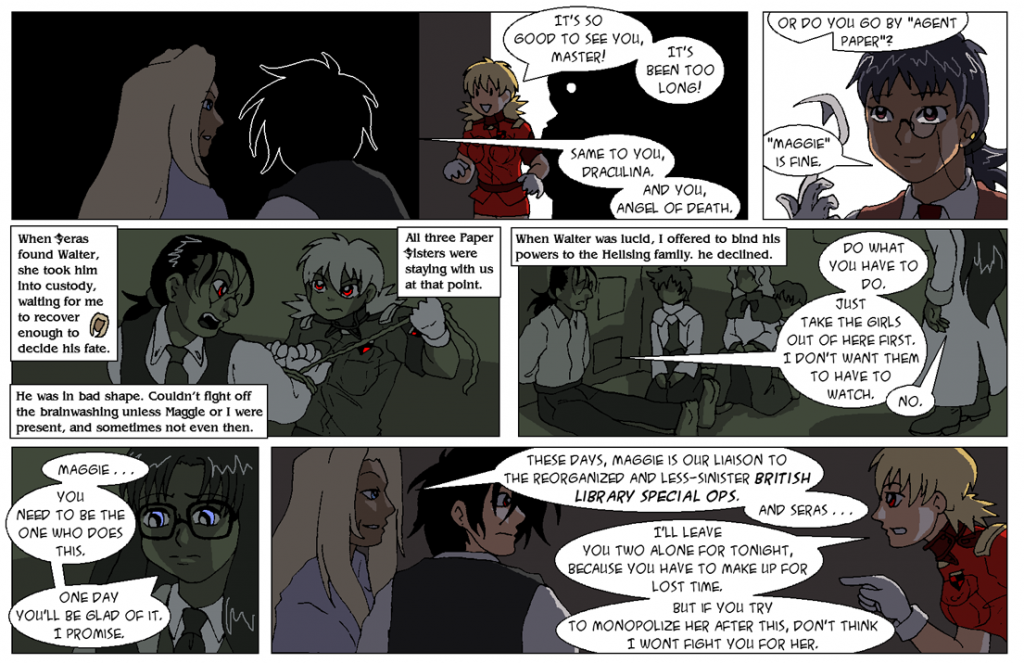 The Japanese phrase in the original Hellsing that gets translated as “Angel of Death” is “shinigami”, made from the characters “shi” (death) + “kami” (god/spirit). The word for “paper” is also pronounced “kami”, and this is used for puns in the original R.O.D manga, as in “May the blessings of paper be with you.”

In the present-day Shineverse, Nenene and Michelle think it’s hilarious to address Maggie as “Angel of Paper.” (Anita always rolls her eyes at it, and nobody from Hellsing gets why it’s funny in the first place.)

Seras: It’s good to see you, Master! It’s been too long!

Alucard: Same to you, Draculina. And you, Angel of Death.

Or do you go by “Agent Paper”?

Integra (narrating): When Seras found Walter, she took him into custody, waiting for me to recover enough to decide his fate. He was in bad shape. Couldn’t fight off the brainwashing unless Maggie or I were present, and sometimes not even then. All three Paper Sisters were staying with us at that point.

When Walter was lucid, I offered to bind his powers to the Hellsing family; he declined.

Walter: Do what you have to do. Just take the girls out of here first. I don’t want them to have to watch.

Maggie…you need to be the one who does this. One day you’ll be glad of it. I promise.

Integra: These days, Maggie is our liaison to the reorganized and less-sinister British Library Special Ops. And Seras…

Seras: I’ll leave you two alone for tonight, because you have to make up for lost time. But if you try to monopolize her after this, don’t think I won’t fight you for her.

Alucard: You know what? No. You want me to ask, so you’ll tell me eventually. In the meantime, I’m going to ask about Walter instead.

Seras: Hey! Get away from Sir Hellsing, you–

Integra: What kept you, Seras? Even D got here before you did.

Seras: Heh…I guess he doesn’t get his speed from my side.

Integra: Run along now, D. We’ll talk when you wake up.

Alucard: If you’d given him a name that was less of a mouthful, you wouldn’t have to shorten it.

Integra: I don’t regret it. I wanted to honor my mother’s side of the family.

And speaking of motherhood…aren’t you going to ask?

Alucard: Fair enough, little one. But it’s also bad manners not to introduce yourself.

If you keep trying to break my hand, I’ll have Mum order you to turn into a frog.

Alucard: Okay, I could get to like this kid.