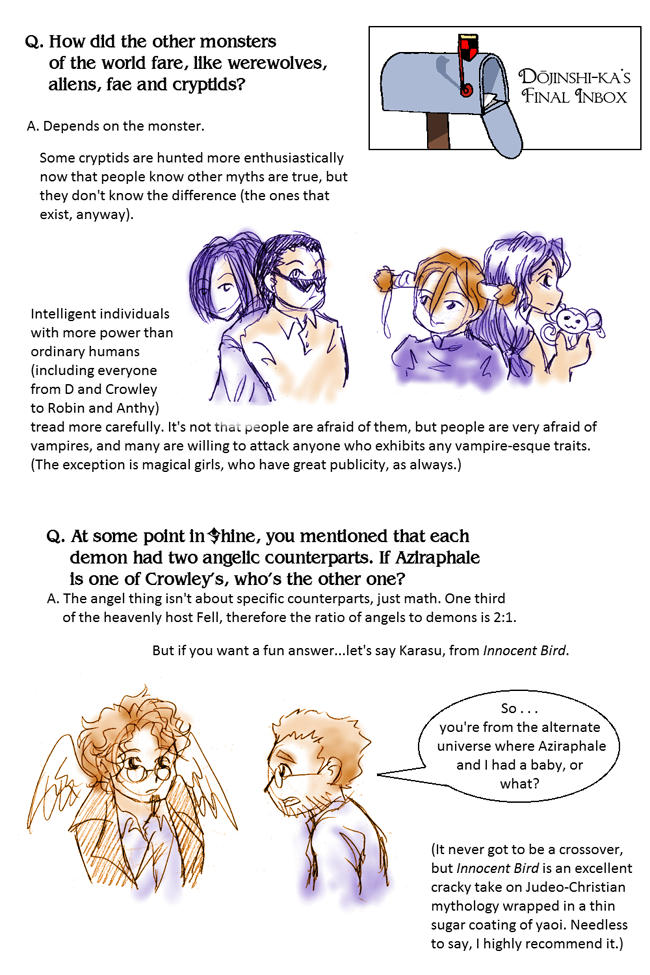 I said I’d link to fics, and sure enough, one has already been written. Check it out: A Night in the Life of a First Responder, Post-’99

Q. How did the other monsters of the world fare, like werewolves, aliens, fae, and cryptids?

A. Depends on the monster.

Some cryptids are hunted more enthusiastically now that people know other myths are true, but they don’t know the difference (the ones that exist, anyway).

Intelligent individuals with more power than ordinary humans (including everyone from D and Crowley to Robin and Anthy) tread more carefully. It’s not that people are afraid of them, but people are very afraid of vampires, and many are willing to attack anyone who exhibits any vampire-esque traits. (The exception is magical girls, who have great publicity, as always.)

Q. At some point in Shine, you mention that each demon had two angelic counterparts. If Aziraphale is one of Crowley’s, who’s the other one?

A. The angel thing isn’t about specific counterparts, just math. One third of the heavenly host Fell, therefore the ratio of angels to demons is 2:1.

But if you want a fun answer…let’s say Karasu, from Innocent Bird.

Anderson: So…you’re from the alternate universe where Aziraphale and I had a baby, or what?

(It never got to be a crossover, but Innocent Bird is an excellent cracky take on Judeo-Christian mythology wrapped in a thin sugar coating of yaoi. Needless to say, I highly recommend it.)