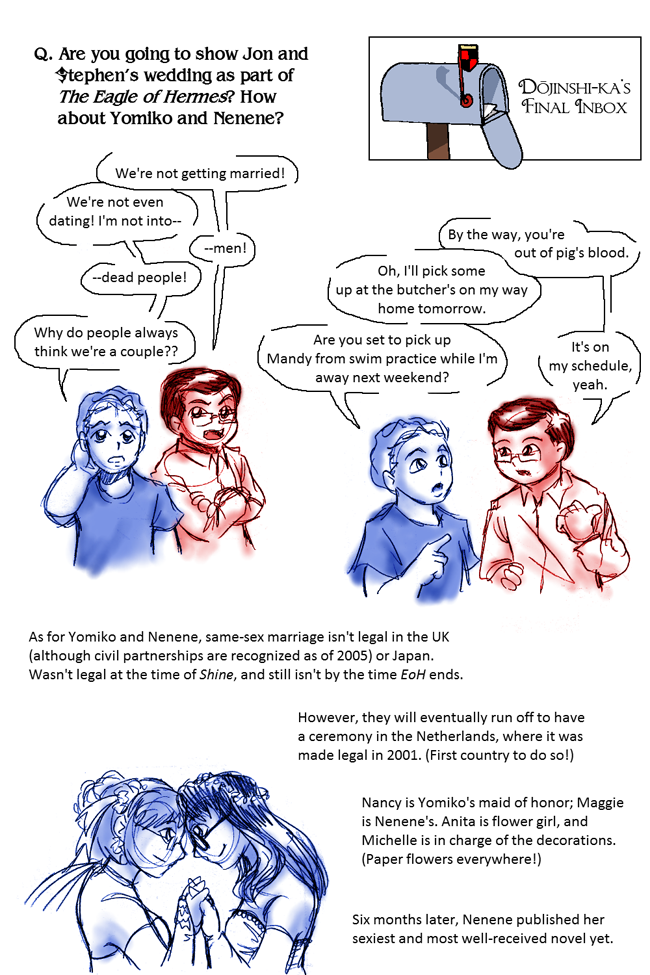 Q. Are you going to show Jon and Stephen’s wedding as part of The Eagle of Hermes? How about Yomiko and Nenene?

Stephen: We’re not getting married!

Jon: We’re not even dating! I’m not into–

Stephen: By the way, you’re out of pig’s blood.

Jon: Oh, I’ll pick some up at the butcher’s on my way home tomorrow. Are you set to pick up Mandy from swim practice while I’m away next weekend?

Stephen: It’s on my schedule, yeah.

As for Yomiko and Nenene, same-sex marriage isn’t legal in the UK (although civil partnerships are recognized as of 2005) or Japan. Wasn’t legal at the time of Shine, and still isn’t by the time EoH ends. However, they will eventually run off to have a ceremony in the Netherlands, where it was made legal in 2001. (First country to do so!)

Nancy is Yomiko’s maid of honor; Maggie is Nenene’s. Anita is flower girl, and Michelle is in charge of the decorations. (Paper flowers everywhere!)

Six months later, Nenene published her sexiest and most well-received novel yet.