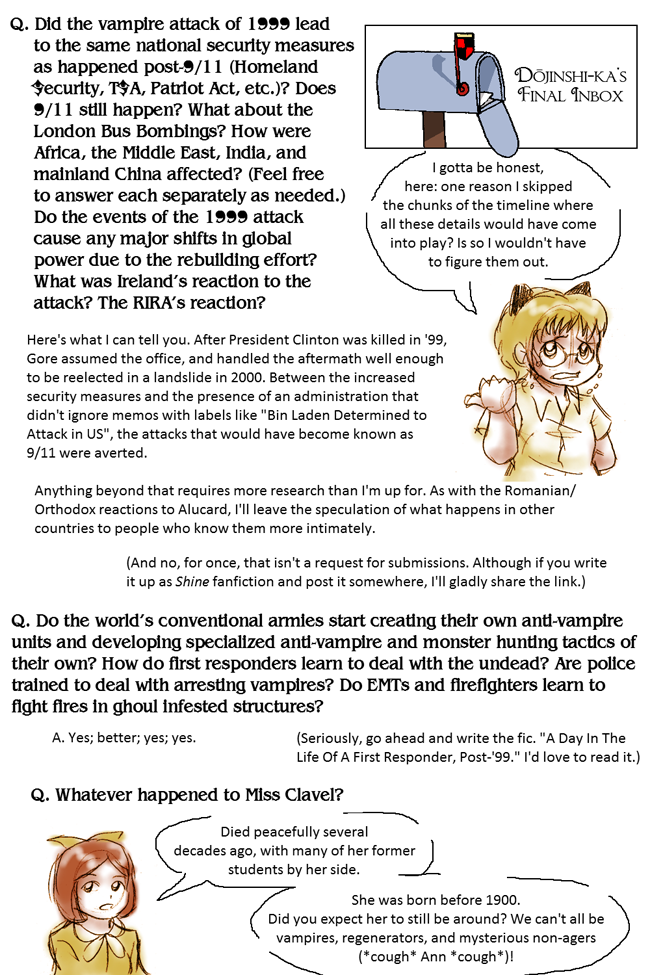 Q. Did the vampire attack of 1999 lead to the same national security measures as happened post-9/11 (Homeland Security, TSA, Patriot Act, etc.)? Does 9/11 still happen? What about the London Bus Bombings? How were Africa, the Middle East, India, and mainland China affected? (Feel free to answer each separately as needed.) Do the events of the 1999 attack cause any major shifts in global power due to the rebuilding effort? What was Ireland’s reaction to the attack? The RIRA’s reaction?

Erin: I gotta be honest, here: one reason I skipped the chunks of the timeline where all these details would have come into play? Is so I wouldn’t have to figure them out.

Here’s what I can tell you. After President Clinton was killed in ’99, Gore assumed the office, and handled the aftermath well enough to be reelected in a landslide in 2000. Between the increased security measures and the presence of an administration that didn’t ignore memos with labels like “Bin Laden Determined to Attack in US”, the attacks that would have become known as 9/11 were averted.

Anything beyond that requires more research than I’m up for. As with the Romanian/Orthodox reactions to Alucard, I’ll leave the speculation of what happens in other countries to people who know them more intimately.

(And no, for once, that isn’t a request for submissions. Although if you write it up as Shine fanfiction and post it somewhere, I’ll gladly share the link.)

Q. Do the world’s conventional armies start creating their own anti-vampire units and developing specialized anti-vampire and monster hunting tactics of their own? How do first responders learn to deal with the undead? Are police trained to deal with arresting vampires? Do EMTs and firefighters learn to fight fires in ghoul infested structures?

Q. Whatever happened to Miss Clavel?

Madeline: Died peacefully several decades ago, with many of her former students by her side.

She was born before 1900. Did you expect her to still be around? We can’t all be vampires, regenerators, and mysterious non-agers (*cough*Ann*cough*)!